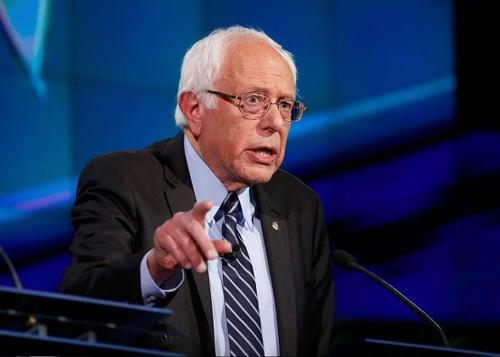 Bernie Sanders’ response to a question about his record on guns was awful.

… Instead, when the topic arose during Tuesday’s Las Vegas debate, Sanders fumbled, raising his typical retort that he represents a gun-friendly state but supports gun control elsewhere.

This answer is pretty much the worst one Sanders could possibly provide. By alleging that urban areas need stricter gun laws than rural ones, the senator adds an awkward racial undertone to the gun debate. Vermont—which, Sanders claims, can handle loose gun restrictions—is 1 percent black. Baltimore—which Sanders has cited as an area in need of stricter gun control—is about 64 percent black. It’s alarmingly easy to read Sanders’ rejoinder here as an implication that rural whites can be trusted with guns and urban blacks cannot be.

Of course, the fact that it’s true just makes it more racist.

This year through the first week of August, the city of Baltimore, with 623,000 people, already had 215 homicides.

Back in 2004, I wrote in The American Conservative in “Baby Gap:”

The endless gun-control brouhaha, which on the surface appears to be a bitter battle between liberal and conservative whites, also features a cryptic racial angle. What blue-region white liberals actually want is for the government to disarm the dangerous urban minorities that threaten their children’s safety. Red-region white conservatives, insulated by distance from the Crips and the Bloods, don’t care that white liberals’ kids are in peril. Besides, in sparsely populated Republican areas, where police response times are slow and the chances of drilling an innocent bystander are slim, guns make more sense for self-defense than in the cities and suburbs.

White liberals, angered by white conservatives’ lack of racial solidarity with them, yet bereft of any vocabulary for expressing such a verboten concept, pretend that they need gun control to protect them from gun-crazy rural rednecks, such as the ones Michael Moore demonized in “Bowling for Columbine,” thus further enraging red-region Republicans.

Of course, federalism is downright un-American.