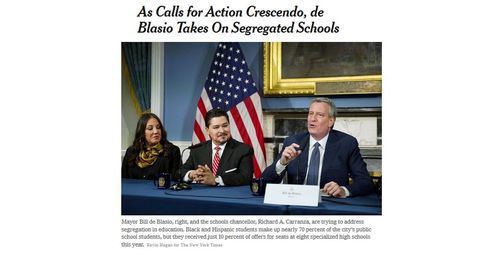 "Though New York City has one of the most segregated schoolsystems in the country," writes Elizabeth Harris of The New York Times, until now, Mayor Bill de Blasio "was all but silent on the issue."

He was "reluctant even to use the word 'segregation.'"

Now the notion that the liberal mayor belongs in the same basket as Southern governors in the '50s and '60s like Orval Faubus of Arkansas and Ross Barnett of Mississippi seems a bit of a stretch.

For what Harris [Email her] means by "segregation" is that in the city's eight most prestigious schools, like Stuyvesant High School and the Bronx School of Science, where admission is by written test, the makeup of the student body does not remotely resemble the racial diversity of the city.

"Black and Hispanic students make up nearly 70 percent of the city's public school students," writes Harris, "but they received just 10 percent of offers for seats at specialized schools this fall."

"About 27 percent of the offers went to white students who make up 15 percent of the student system; 52 percent went to Asian students, who up make 16 percent." 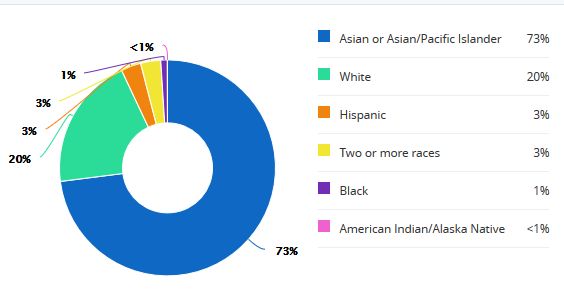 Harris later adjusted her numbers. Asians are 62 percent of students. At Stuyvesant, only 10 of 900 students being admitted this fall are black.

De Blasio now demands change: "We must be sure that the very best high schools are open to ... every kind of New Yorker." The student bodies at the elite public schools "need to look like New York City."

Translation: We must have more Hispanic and black students, and if that means throwing out the entrance exam to cut the numbers of Asians and whites, throw out the exam.

Soo Kim, president of the Stuyvesant alumni association, is having none of it: "Correct me if I'm wrong, but they're saying these schools are too Asian, so there must be something wrong. ... Am I the only one who looks at that and says, 'I don't understand how that's even legal.'"

Councilman Peter Koo took it straight to the mayor:

"The test is the most unbiased way to get into a school. ... It doesn't require a resume. It doesn't even require connections. The mayor's son just graduated from Brooklyn Tech and got into Yale. Now he wants to stop this and build a barrier to Asian-Americans -- especially our children."

"I'm not sure if the mayor is a racist," says Kenneth Chiu, chairman of the New York City Asian-American Democratic Club, "but this policy is certainly discriminatory." 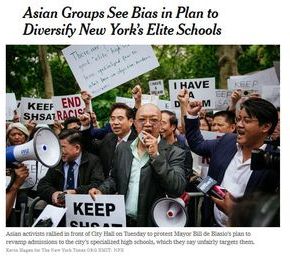 As Asians demonstrated this week against changing admissions standards to reduce the number of Asian students, schools chancellor Richard Carranza gave them the back of his hand: "I just don't buy into the narrative that any one ethnic group owns admissions to these schools."

Yet it is Carranza and De Blasio who are claiming an entitlement to seats at the schools based on race. The Asian protesters are insisting on maintaining merit and performance, measured by tests, as the standard of admission.

This issue is not confined to New York. It has gone national and pits Asian-Americans who believe in and benefit from a meritocracy in education against egalitarians who embrace race quotas and affirmative action to bring about a greater equality of rewards.

That Asians are the new victims of race discrimination seems undeniable. In August, the Times reported:

"A Princeton study found that students who identify as Asian need to score 140 points higher on the SAT than whites to have the same chance of admission to private colleges, a difference some have called 'the Asian tax.'

"A lawsuit cites Harvard's Asian-American enrollment at 18 percent in 2013, and notes very similar numbers ranging from 14 to 18 percent at other Ivy League colleges, like Brown, Columbia, Cornell, Princeton and Yale."

Now, compare the numbers from California:

"In the same year (2013), Asian-Americans made up 34.8 percent of the student body at the University of California, Los Angeles, 32.4 percent at Berkeley and 42.5 percent at Caltech."

Among possible reasons for the racial disparities: In 1996, by voter referendum, Californians outlawed racial preferences.

What the Ivy League is doing may be criminal in the Golden State.

In 1965, in words written by Richard Goodwin who died last month, and delivered at Howard University, LBJ declared:

It appears to be a future of endless collisions and conflicts over who deserves and who gets what -- based upon ethnicity and race.