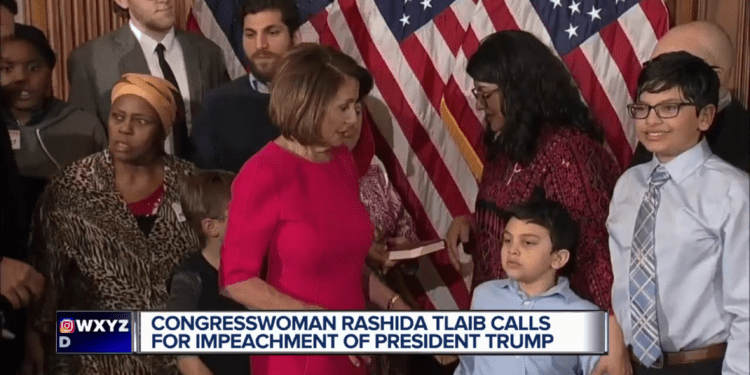 Thus did the member from Michigan, Rashida Tlaib, declare last January to be the goal of the 2019 House Democratic Caucus.

The House impeached President Donald Trump on a straight party-line vote. Not one Republican signed on to the most partisan impeachment in U.S. history.

Yet, as we head for trial in the Senate, Democrats seem to be having nervous second thoughts over what they have done.

Minority Leader Chuck Schumer called for the Senate to subpoena four new witnesses the House never heard. Nancy Pelosi signaled Wednesday night that she might not send over to the Senate the articles of impeachment the House had just approved.

Majority Leader Mitch McConnell took to the floor both Wednesday night and Thursday morning. To have the Senate, which is judge and jury of the impeachment charges, to start calling witnesses whom House prosecutors failed to pursue "could set a nightmarish precedent."

Said McConnell, Schumer "would apparently like our chamber to do House Democrats' homework for them."

Schumer's plea for new witnesses is an admission that the House's case for impeaching Trump is inadequate and deficient and could prove wholly noncredible to the American people. After all, if you need more witnesses, you probably do not have the smoking gun.

The message sent by Pelosi's call for more time before the trial, and Schumer's call for more witnesses, is one of fear that not only could the House's case for impeachment fail, it could be laughed out of the Senate. And the American people might be fine with that.

The Democratic Party has bet the ranch on the impeachment and removal of Trump for imperiling our "national security." But are Schumer and Pelosi behaving as though the republic is in mortal peril?

Schumer's call for new witnesses also underscores the thinness of Article I of the impeachment, Trump's alleged "Abuse of Power."

Beneath Article I, there is not a single crime listed—no treason, no bribery, no extortion, no high crimes.

What kind of impeachment is this, with not one crime from the list the Founding Fathers designated as impeachable acts?

Why did the Democratic House not impeach Trump for conspiring with Russia to steal the 2016 election? Answer: The House could no more prove this charge than could Robert Mueller after two years.

Other events are breaking Trump's way.

The James Comey-FBI investigation Mueller inherited has begun to take on the aspect of a "deep state" conspiracy.

According to the Justice Department's IG Michael Horowitz, the FISA court warrants used to justify FBI spying were the products not only of incompetence but also of mendacity and possible criminality.

The "essential" evidence use by the FBI to get the FISA judge to approve warrants for surveillance was the Steele dossier.

An ex-British spy, Christopher Steele was working in mid-2016 for a dirt-diving operation hired by the DNC and Clinton campaign to go after Trump. His altarpiece, the dossier, we learn from Horowitz, was a farrago of fabrications, rumors and lies fed to Steele by a Russian "sub-source."

In the four FBI submissions to the FISA courts for warrants to spy on Carter Page, there were "at least 17 significant errors or omissions."

And all 17 went against Team Trump.

Moreover, the discrediting of the Comey investigation has just begun. U.S. Attorney John Durham will report this spring or summer on his deeper and wider investigation into its roots.

As IG of Justice, Horowitz's investigation was confined to his department and the FBI. But Durham is looking into the involvement of U.S. and foreign intelligence in the first days of the FBI investigation.

Attorney General Bill Barr and Durham have both said that they do not share Horowitz's view that there was no political bias at the beginning of the investigation of the Trump campaign. Durham's writ is far wider than Horowitz's and he has the power to impanel grand juries and bring criminal indictments.

Among the fields Durham is plowing are reports that agents and assets of the FBI and CIA may have "set up" Trump foreign policy aide George Papadopoulos. Possible purpose: to feed him intel about Russia having dirt on Hillary Clinton, and then entrap him, put him in legal jeopardy, and turn him into an investigative instrument to be used against Trump.

With the Horowitz report confirming what the Trumpers have been reporting and saying about Comey's investigation for years, and the newly proven manipulation of the FISA courts, the media hooting about "right-wing conspiracy theories" seems to have been toned down.

Carter Page, once considered a dupe of the Russians, is now seen as a patriot who assisted his country's intelligence services only to be made a victim of injustice who saw his civil rights be trampled upon by his own government.

The cards appear to be falling Trump's way.