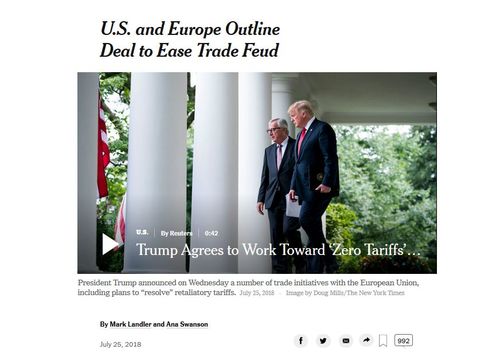 On meeting with the EU's Jean-Claude Juncker last month, Donald Trump tweeted: "Both the U.S. and the E.U. drop all Tariffs, Barriers and Subsidies! That would finally be Free Market and Fair Trade."

Did Larry Kudlow somehow get access to Trump's phone?

We know not. But, on hearing this, Steve Forbes, Stephen Moore and Arthur Laffer broke into the "Hallelujah" chorus of Handel's "Messiah." 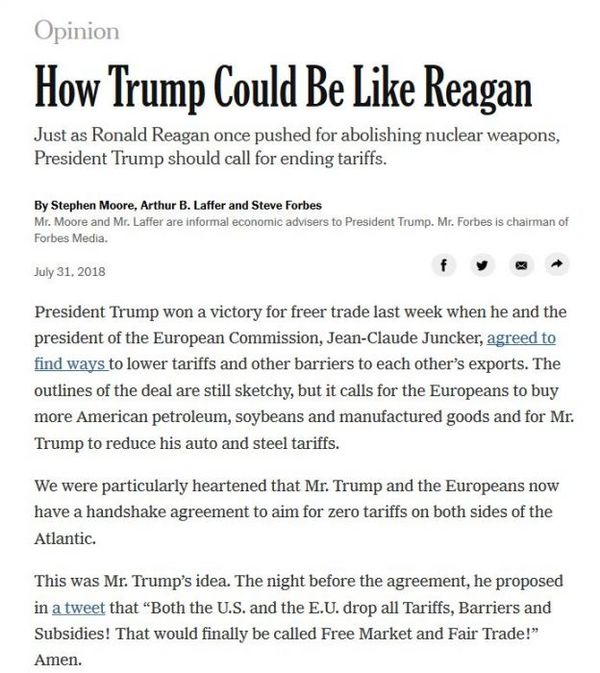 "Amen," they thundered in The New York Times.

Trump should declare "total trade disarmament" to be national policy and make free trade his "legacy" to America. Such a proclamation, they wrote, would assure Trump the "moral high ground" in the global debate and transform him from "evil disrupter of international commerce to potential savior."

For free trade is always and ever a "win-win for trading partners."

To read the Times op-ed is to appreciate that what we are dealing with here is an ideology, a political religion, a creed, a cult.

For consider the fruits of free trade policy during the last 25 years: the frozen wages of U.S. workers, $12 trillion in U.S. trade deficits, 55,000 factories lost, 6 million manufacturing jobs gone, China surpassing the U.S in manufacturing, all causing a backlash that pushed a political novice to the Republican nomination and into the presidency.

To maintain a belief in the superiority of free trade to economic patriotism, in the face of such results, is to recognize that this belief system is impervious to contradictory proof.

Still, the enduring enthusiasm of free trade zealots is not the only sign that GOP globalists, having learned nothing and forgotten nothing, are looking to a post-Trump era to resurrect their repudiated dogmas.

And what would happen after we declare open borders?

"Immigrants will not flood into America. ... Crime will not skyrocket. ... Even if values and culture change, so what? ... Who says America's current values—some of them deeply evil—are the right ones?"

Bottom line for Cato's Miron: If we throw open America's borders and invite the world to come in and to remake who we are as a nation, "Think about the money we could save and make."

This is truly economics uber alles, economy before country.

Other open borders and free trade true believers have begun speaking out. Billionaire industrialist Charles Koch, a megadonor to the GOP, has just lashed out at Trump as "divisive" and denounced the "rise in protectionism."

Nations, organizations and individuals, said Koch, "are doing whatever they can to close themselves off from the new, hold onto the past and prevent change."

He added, "This is a natural tendency, but it is a destructive one."

In a pair of tweets, Trump fired back:

The billionaire Koch brothers, Charles and David, are threatening to have their network, Americans for Prosperity, withhold funding from GOP candidates who echo Trump on immigration and trade.

The open borders, free trade ideology of the Kochs, the Cato Institute, and such supply-siders as Moore, Forbes and Laffer, have deep roots in the Republican Party establishment.

Milton Friedman was of this school, as was the longtime editorial page editor of The Wall Street Journal, Bob Bartley, who for years pushed for a Constitutional amendment declaring, "There shall be open borders."

Bartley, somewhat prematurely, predicted that the nation-state was "finished" in the New World Order. Yet, today, as tribalism and nationalism are making a comeback, it looks more like the transnational "New World Order" that may be headed for the dumpster.

As long as Trump is in the White House and the party base is so viscerally behind him and his America First agenda, a renunciation of tariffs or a return to globalism is dead.

But what happens after Trump? Who and what comes next?

Republican recidivism—a return to the rejected open borders, free trade agenda of the Bush Republicans—would ignite a firestorm of protest that would tear the party of Trump apart.

Yet, while these ideas have lost Middle America, they are alive and well among the establishment elites of both parties, who have also not given up on a foreign policy of using America's economic and military power to attempt to convert mankind to democracy.