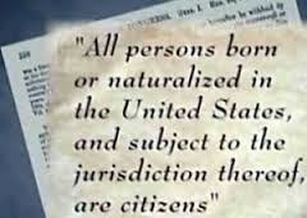 Moreover, while it's always difficult to predict how the Supreme Court will rule, the opponents of birthright citizenship reform rely on a dangerously narrow reading of the 14th Amendment. Its current interpretation may not be difficult to “overturn” at all.

Yet in knee-jerk reaction to Donald Trump’s contention that ending birthright citizenship for illegal aliens does not require a constitutional amendment, liberal, libertarian, and some conservative (or at least Republican) legal scholars have suddenly become strict originalists in interpreting Section 1 of the 14th Amendment: “All persons born or naturalized in the United States, and subject to the jurisdiction thereof, are citizens of the United States.”

Similarly, immigration enthusiast Bret Stephens complains in the Wall Street Journal that "a sizable constituency in a party that is supposed to favor a plain reading of the Constitution objects to a plain reading of the 14th Amendment" can possibly support Trump—leading him to declare "if by now you don’t find Donald Trump appalling, you’re appalling" [The Donald and the Demagogues, August 31, 2015] (Stephens’ skills as a Constitutional scholar are evidenced by his reference to the “American creed of ‘give us your tired, your poor’.” That’s just a poem, Bret.)

The Fourteenth Amendment was ratified to overcome any doubts over the constitutionality of the Civil Rights Act of 1866, which stated “That all persons born in the United States and not subject to any foreign power, excluding Indians not taxed, are hereby declared to be citizens of the United States.” During the debates over the Act, Rep. James F. Wilson said that "[e]very person born on in the Unites States is a natural-born citizen of such States, except it may be that children born on our soil to temporary sojourners or representatives of foreign governments, are native-born citizens of the United States" [Congressional Globe, 39th Congress, 1866, page 1117]

Though the drafters changed “not subject to any foreign power, excluding Indians not taxed” to “and subject to jurisdiction thereof,” they insisted the meaning was the same. Senator Lyman Trumbull, then chairman of the Senate Judiciary Committee explained it meant “not owing allegiance to anybody else."

Senator Jacob Howard of Michigan further noted, that the Amendment

will not, of course, include persons born in the United States who are foreigners, aliens, who belong to the families of ambassadors or foreign ministers accredited to the Government of the United States.

[Quoted in Citizenship, Heritage Foundation Guide to the Constitution]

James Ho, a former Clarence Thomas clerk now at Gibson Dunn dismisses the importance of these quotations by noting,

Repeal proponents contend that history supports their position. First, they quote Howard’s introductory remarks to state that birthright citizenship “will not, of course, include … foreigners.”[29] But that reads Howard’s reference to “aliens, who belong to the families of ambassadors or foreign ministers” out of the sentence.

Ho is quibbling over the meaning of a comma in a transcript of parliamentary speech. One could conceivably interpret Howard’s statement to mean

2) aliens who are family members of diplomats

1) foreigners and aliens who are family members of diplomats

With nothing more than a 150 year old transcript of the debate, it’s hard to know for sure. However, Ho thinks he has a trump card in an exchange between Senators Edgar Cowan of Pennsylvania and John Conness of California.

Conness who supported it, responded: “The children begotten of Chinese parents in California, and it is proposed to declare that they shall be citizens. We have declared that by law; now it is proposed to incorporate the same provision in the fundamental instrument of the nation. I am in favor of doing so.”

Conservative legal scholar John Yoo (who to his credit, has done great work on Obama’s Executive Amnesty) quoted this exchange to argue that this was the clear intent to the 14th Amendment and the only people who would possibly oppose it are “nativist Democrats and candidates who appeal to the lesser angels of their nature”. [On Citizenship, the ‘Birthers’ Are Right, National Review, August 22, 2015]

Liberals like Tom Donnelly of the Constitutional Accountability Center [The GOP’s Birthright Citizenship Flip-Flop, Politico, August 23, 2015] and that great paragon of constitutional originalism, the Southern Poverty Law Center [SPLC To Senate: Don't Mess with Birthright Citizenship, March 21, 2015], also cite this exchange as proof that the Founders intended for birthright citizenship to apply to children of illegal aliens.

But there are two problems with this interpretation. First, unlike Trumbull or Howard who drafted the Amendment, Conness was not integral in its ratification and his views should not be given as much weight. Moreover, he "was identified with the railroad interests that had sought the importation of Chinese labor," and thus had an incentive to promote a different interpretation. [ Reconstruction and Racial Nativism, by John Hayakawa Torok, Asian American Law Journal, January 1996 (PDF)]

Second, and more importantly, the birthright citizenship advocates ignore the fact that Conness’s premised his assertion on the lack of massive immigration. He emphasized that

…the children of Mongolian parentage, born in California, is very small indeed, and never promises to be large, notwithstanding our near neighborhood to the Celestial land. The habits of those people and their religion appear to demand that they all return to their own country at some time or other, either alive or dead.

another feature connected with them is that they do not bring their females to our country but in very limited numbers, and rarely ever in connection with families; so their progeny in California is very small indeed…Indeed, it is only in exceptional cases that they have children in our State, and therefore the alarming aspect of the application of this provision to California, or any other loud to which the Chinese may come as Immigrants, is simply a fiction in the brain of persons who deprecate it, and that alone.

He also noted that “The State of California at various times has passed laws restrictive of Chinese immigration”—implying that this was an issue that only affected Californians, which the state could deal with on its own [Senator Conness on Reconstruction, Sacramento Daily Union, July 25, 1866]

But since then, of course, the federal government has seized control over setting immigration and deportation policies, and anchor babies are no longer “exceptional cases.”

In fairness, during the debates on the Civil Rights Act, Senator Trumbull made a similar point. When vetoing the legislation—only to be later overridden—President Andrew Johnson noted that it might make Chinese and Gypsies into citizens. Trumbull responded: “The President also has an objection to the making citizens of Chinese and Gypsies. I am told that but few Chinese are born in this country, and where the Gypsies are born I never knew. [Laughter.]”

Trumbull did not actually accept that the Act would necessarily lead to birthright citizenship, but rather argued that raising it was “quibbling.” [Congressional Globe, 39th Congress, 1866, page 1757]

The concept of a “Living Constitution” gets a bad name in large part because the Warren Court and subsequent liberal jurists used it to justify Leftist judicial activism. Yet it was Justice Oliver Wendell Holmes Jr., one of the most foremost proponents of judicial restraint, who popularized the idea. According to Holmes,

With regard to that we may add that when we are dealing with words that also are a constituent act, like the Constitution of the United States, we must realize that they have called into life a being the development of which could not have been foreseen completely by the most gifted of its begetters. It was enough for them to realize or to hope that they had created an organism; it has taken a century and has cost their successors much sweat and blood to prove that they created a nation. The case before us must be considered in the light of our whole experience and not merely in that of what was said a hundred years ago. . . .We must consider what this country has become . . . .

But Holmes was referring to changing in transportation and technology—not changes in elite sociological opinion, which is what most current advocates of a “living constitution” mean, and why some Establishment conservative legal scholars will come up with procrustean “originalist cases for Brown v. Board of Education” and even gay marriage.

Bottom line: To the extent that drafters of the 14th Amendment thought it would apply to immigrants, they premised it on the absence of mass non-white immigration to this country. Moreover, the concept of illegal aliens as defined in the Immigration and Nationality Act as amended did not exist. Finally, U.S. citizenship did not lead to massive welfare benefits and other transfer payments as it does now.

Thus the influx of millions of non-white illegal aliens is not only a situation which the drafters of the 14th Amendment “could not have been foreseen”—it was something they explicitly stated would not happen.

If there is ever a situation that Holmes theory of a living constitution should apply to, this is it.

As for the defenders of birthright citizenship who have just discovered originalism: when I was researching this article, I found in the debates that, right after Trumbull made his point about the Chinese and Gypsies, he agreed with President Johnson that “state laws on the subject of marriage between the two races” would not be affected.

Until these Establishment scholars start criticizing the decision in Loving v. Virginia, in which the U.S. Supreme Court cited the Fourteenth Amendment to strike down an anti-miscegenation statute despite the absolutely clear original intent of the Amendment’s framers as expressed above, they have no right to suggest that considering the context of 14th Amendment in the birthright citizenship debate is “judicial activism.”