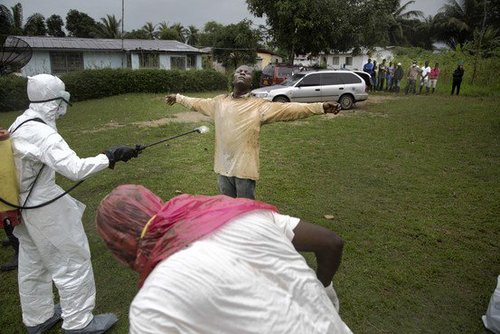 Members of a body-removal team spray each other with chlorine disinfectant after removing a body from a home in Unification Town, Liberia. Note improvised HazMat headgear—made from a plastic bag.

The latest episode in our Third World President’s quest to impose Third World government is the appointment of a political crony with no medical experience as the nation’s “Ebola czar.” [Obama’s New Ebola ‘Czar’ Does Not Have Medical, Health Care Background, Washington CBS, October 17, 2014] But even this pales compared to the chaos in Liberia, and throughout the Third World, that President Obama seems dogmatically determined to import.

Just as Third World doctors in America are willing to defraud patients for personal gain, so are Third World health officials in Liberia willing to lie about Ebola statistics if it means they can receive bribes.

Liberian rapid response teams who are officially supposed to be removing the corpses of Ebola patients from their homes are instead soliciting bribes from victims’ families in exchange for fraudulent death certificates saying the patients did NOT die of Ebola. [Some Ebola-Stricken African Families Pay Bribes for Fake Death Records by Heidi Vogt, Wall Street Journal, October 12, 2014]

Not surprisingly, official reports of “just ten deaths from Ebola in the capital of Freetown…” were belied by non-governmental reports “that just in the last eight days 110 Ebola victims were buried in just one of the city’s cemeteries.” [The View from Olympus: Don’t Shop at This WAWA by William S. Lind, Traditional Right, September 25, 2014.]

Local funeral practices, which the response teams were supposed to restrain, are not helping matters. Mourners wash the corpse with bare hands and kiss the dead before burial.

Germs? What germs? Keep in mind that, as VDARE.com's James Fulford has reported, one of the locals’ many charming and vibrant characteristics is their ignorance of or rejection of germ theory. They believe that Ebola is caused either by a curse being put on the victim, or by an evil poison cooked up by the white man to kill blacks.

Indeed, a Liberian academic [CV PDF] who teaches in America is actually arguing just that. Dr. Cyril Broderick [Email him] of Delaware State University, a black public university funded by (white) taxpayers, argued in an African newspaper that Ebola was created by the American government to commit genocide against blacks. As evidence, he offers uncited “reports” and a novel. [A professor in U.S. is telling Liberians that the Defense Department ‘manufactured’ Ebola, by Terrence McCoy, Washington Post, September 26, 2014]

According to Dr. Broderick:

Scientists allege deadly diseases such as Ebola and AIDS are bio weapons being tested on Africans. Other reports have linked the Ebola virus outbreak to an attempt to reduce Africa’s population. Liberia happens to be the continents’s [sic] fastest growing population.

What “scientists”? They don’t exist.

This tendency to blame whitey for Ebola can also be found in the U.S. Thus the Dallas Morning News published an op-ed signed by Josephus Weeks, who claims to be the nephew of Thomas Eric Duncan, the man who knowingly brought the Ebola virus to America and ran up a $500,000 hospital bill in a mere 12 days before his October 8 death. Duncan also infected two hospital nurses and, since one of the nurses, Amber Joy Vinson, traveled immediately after caring for Duncan, possibly many others.

But Duncan’s family has bigger concerns, like positioning itself for a lawsuit. With no sense of shame, Josephus Weeks (or his plaintiff attorney) writes,

Now, Dallas suffers. Our country is concerned. [NS: He means the US, not Liberia] Greatly. About the lack of answers and transparency coming from a hospital whose ignorance, incompetence and indecency has yet to be explained. I write this on behalf of my family because we want to set the record straight about what happened and ensure that Thomas Eric did not die in vain…

The fact is, nine days passed between my uncle’s first ER visit and the day the hospital asked our consent to give him an experimental drug — but despite the hospital’s request they were never able to access these drugs for my uncle. [NS: Hospital officials have said they started giving Duncan the drug Brincidofovir on October 4.]He died alone. His only medication was a saline drip. [Exclusive: Ebola didn’t have to kill Thomas Eric Duncan, nephew says, October 14, 2014, updated 16 October 2014.]

Weeks also insinuates that the reason Duncan died was due to racism. He says the hospital saw Duncan “was a man of color with no health insurance and no means to pay for treatment, so within hours he was released with some antibiotics and Tylenol”…

However, the fact is Duncan eventually did receive hundreds of thousands of dollars of treatment despite having no insurance and being a foreigner. There is no cure for Ebola; different therapies have been tried, but the ones Weeks is complaining about were either temporarily exhausted (ZMapp) or improper (Duncan had the wrong blood type to get a plasma transfusion from Ebola survivor Dr. Kent Brantley). And it is unclear whether they work anyway. [Dallas Hospital Responds to Criticisms of Ebola Patient's Treatment by Anna Almendrala, Huffington Post, October 10, 2014.]

Weeks even manages to simultaneously claim that Duncan was “courageous” for helping an Ebola patient in Liberia but also that the incident “never happened.” This is critical because that woman is the supposed source of his infection.

However, other reports citing Duncan’s relatives claim that the incident did happen, and that Duncan mistook a woman dying of Ebola as having a miscarriage. [Before his death, Duncan said he mistook Ebola case in Liberia for miscarriage; never lied by Avi Selk, Dallas Morning News, October 8, 2014.]

The only constant in all these wild stories: Liberians in general and Duncan in particular are victims of the West—and someone has to pay.

Face it: The Third World is hopelessly corrupt, from the citizens on the street to the doctors and academics. And thanks to mass immigration, the First and Third Worlds are converging.

Although we have First World doctors and technology, much of our health care system is in the hands of both American-born and immigrant Third Worlders.

For instance, my wife, who is a nurse, often works with patients who have had tracheotomies, and have a “trache” to breathe through. She has to periodically clean out the traches, which is disgusting on a good day. On a bad day, the trache of a patient with a respiratory infection fills up with infected mucus, which has to be cleaned out. My wife wears two pairs of gloves for this task. An African nurse colleague just reaches in with bare hands.

Besides an indifference to hygiene, there’s the kind of magical thinking associated with Africa—which is unfortunately no longer limited to the Dark Continent.

In 1998, during a class I took to become a certified nurse aide, a black Guyanese classmate said of an enemy, “I gonna say a prayer. I gonna bind his spirit.”

In my wife’s homeland of Trinidad, which I have visited over a dozen times, blacks and Indians alike have a very African-style approach to religion. “Prayer” is a form of magic incantation, to give one power over one’s enemies. Thus, one Indian man I know was raised a Hindu but has his own personal Christian minister, plus his own personal Hindu pandit, and will practice and pay for West African sorcery like Obeah.

And this magical thinking is mixed with simple, blatant corruption. Trinidadians will simply bribe a doctor and tell him what to write down on a relative’s death certificate, without the doctor performing any examination. In Spanish, the word for such rampant bribery is “mordida.”

But in some ways, we in the United States have reached a new level of corruption and incompetence. 27 African presidents have instituted travel restrictions in response to Ebola. But our own President, as recently as his Saturday radio address, has again refused to follow suit, either out of Political Correctness or a simple indifference to Americans. [Obama: ‘We can’t give in to hysteria or fear’ of Ebola, by Greg Jaffe and Amy Brittain, Washington Post, October 18, 2014].