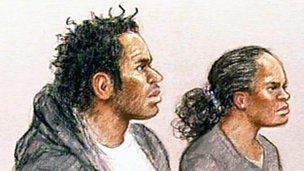 The immigration of Africans to the west has brought some very brutal customs, shocking to residents of the First World. The category of witchcraft covers many abhorrent behaviors, like child sacrifice, such as that of Adam whose headless torso was found in the Thames in London a decade ago.

Another reason for violence from Africans is the fear of witchcraft among others. A 15-year-old Congolese boy, Kristy Bamu, residing in Paris visited his sister and her husband (court sketch shown) in London for Christmas in 2010. Instead of having a nice vacation with the family, he ended up dead because they thought he was a witch. After several days of beatings, they drowned him.

Not all diversity is equal, for sure.

A 15-year-old boy was tortured and drowned by his sister and her boyfriend because they believed he was a witch, the Old Bailey has heard.

Kristy Bamu, from Paris, was found dead in Newham, east London, on Christmas Day in 2010.

The boy had 101 injuries and died from being beaten with a metal bar and drowning, the court heard.

His sister Magalie Bamu and her boyfriend, Eric Bikubi, both Congolese and aged 28, of Newham, deny murder.

Prosecutors told jurors of acts they described as “depraved”, “wicked” and “cruel”.

Mr Bikubi admitted manslaughter on the grounds of diminished responsibility, a plea not accepted by the prosecution.

‘Armoury of weapons’
Kristy and his siblings were visiting the couple for Christmas, but Mr Bikubi had accused the boy and two of his siblings of witchcraft, the court heard.

All three were beaten and other children were forced to join in the attacks. But it was Kristy who became the focus of Mr Bikubi’s attention, the prosecution said.

The teenager was said to be in such pain after days of being hit with an “armoury of weapons” including sticks, pliers, a metal bar, hammer and chisel that he begged to die.

Brian Altman QC, prosecuting, said: “Eventually Bikubi took him into the bathroom, put him in the bath and started to run the water.

“Kristy was just too badly injured and exhausted to resist or to keep his head above the water.

“It was only when he [Mr Bikubi] realised that Kristy was not moving that he stopped what he was doing and pulled him from the water.”

The youngsters were forced to lie to their parents about what was happening when they phoned home, the jury heard.

Mr Altman said of Kristy’s father: “He had sent his children on holiday, not to a torture chamber.”

When police arrived they found Kristy and his siblings – brother Yves, 22, and and sister Kelly, 20, and other children.

Mr Altman said: “All were standing in the living room, hysterical, terrified and soaking wet.

‘Sorcerers’
“None of them spoke any English.”

Kelly Bamu said Mr Bikubi and Ms Bamu accused Kristy, herself and a third child of “being witches or sorcerers – practising witchcraft” which adversely influenced another child.

“Despite her own siblings’ denials that they were sorcerers, Magalie Bamu joined her boyfriend in repeating these fantastic claims and participating in the assaults,” Mr Altman said.

The three were beaten and refused food, drink and sleep and eventually, to stop the torture, they admitted being sorcerers, the jury was told.

Mr Altman said Mr Bikubi’s admission of manslaughter was rejected by the prosecution, which argues the couple carried out “the very deliberate murder” of Kristy.

The defendants are originally from the Democratic Republic of the Congo.

The jury heard that witchcraft or sorcery – called kindoki – is practised in Congolese Christian churches.

Mr Altman said that taken out of the church’s control “it may take on a feral and indeed evil character, as we suggest it did here”.

The court heard that in 2008 Mr Bikubi had accused a family friend of being involved in witchcraft and had forced her to cut her hair short to purge herself.