An African Reader Updates Us On Ebola Travel Bans 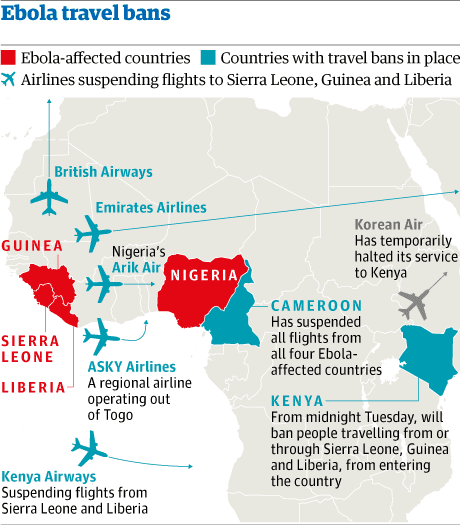 Re: James Fulford’s blog post Kenya’s President Imposes An Ebola Travel Ban, As Do 26 Other African Presidents–But Not Obama

Thank you for your article. It is however not true that these countries have imposed Ebola travel bans. Zambia for example encourages its nationals not to travel to Ebola affected countries. It has set up protocols to monitor and test nationals from West Africa and Congo at all ports of entry. That is not a travel ban. Get your facts correctly.

There now has been an indication that Kenya Airways may resume flights to Liberia and Sierra Leone on 24 October.

James Fulford writes: The facts are Newsmax.com’s and come from InternationalSOS.com’s list of Travel security advisories - Flight bans and closures, October 16, 2014, which does indeed say that many countries don’t have a complete ban.

The conclusion is mine—that these African countries are able to have travel restrictions because they don’t have to worry about being called racist. The US has a Kenyan-American president; it should be able to do the same thing.