October’s employment data, released Friday, confirmed that the job market is recovering, at a seemingly accelerating rate, from the devastation wrought by the Great Recession. Unfortunately, immigrant displacement of American workers, a relentless constant throughout the Obama years, seems also to be accelerating—the sharply accentuated upward trend line visible in August and September, while reduced, remains essentially intact.

The payroll employment survey found 214,000 positions added last month. That was the 9th month in a row of 200,000+ job growth, a feat last accomplished in 1994. (However, although Main Stream Media commentary never mentions it, monthly job creation must be set against approximately 90,000 new workers who arrive every month under current policy—i.e. even without the Amnesty/ Immigration Surge proposed in Gang of Eight-type legislation).

The unemployment rate fell again, to 5.8%, as more than half a million people found work according to the Household Survey. Unusually, immigrant employment fell—by a modest 0.35%—so all the job gains accrued to native-born Americans. But this pause is not enough to reverse the new, sharply-increased trend.

Worse, never during the Obama years have American workers been as whiplashed by immigrants as they were over the past three months. The displacement pushed our New VDARE.com American Worker Displacement Index (NVDAWDI) to record highs: 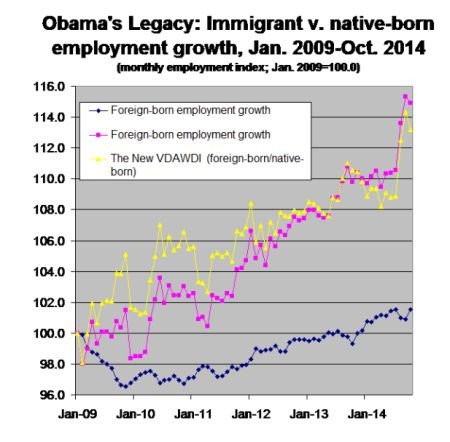 The key variable for calculating American worker displacement is the foreign-born share of total U.S. employment. In February 2009—Obama’s first full month in office—14.9% of all individuals working in the U.S. were foreign-born, according to that month’s Household employment survey.

The immigrant share of total employment has risen steadily, albeit erratically, since the start of the Obama years.

But over the past three months, what had been a glacial trend turned torrential: 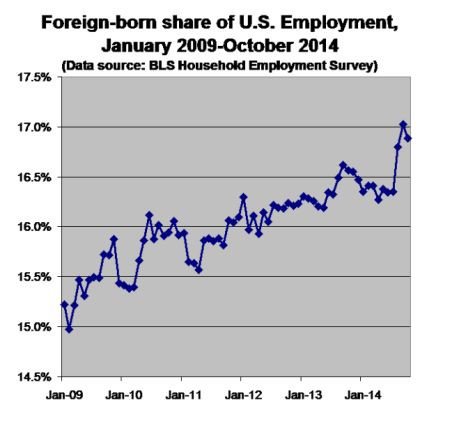 In August of this year the immigrant share of total employment hit a record 16.80%. In September it hit another record: 17.03%. In October the foreign-born share slipped slightly, to 16.88%—still the second-highest immigrant employment rate of the Obama years:

With total U.S. employment running at about 146 million, every one-tenth of one percent increase in employment share translates to 146,000 more workers. From July 2014 to October 2014 the immigrant share of total employment rose from 16.35% to 17.88%—a gain of 1.53 percentage points.

Implication: as many as 2.22 million native-born Americans may be out of work in this period due to immigration.

A more detailed snapshot of American worker displacement over the past year is seen in Household Survey data published in the monthly job report:

Over the past 12 months: Since July foreign-born employment (legal and illegal) increased by about a year’s worth of legal immigration. These new immigrant hires may have already been here, waiting for jobs to open up.

Or a resurgent job market may have triggered an influx of illegals beyond anything seen before.