California: Mulling The Freelance Class In A Bleak Job Market

The front page of Sunday’s Los Angeles Times headlined with “Laboring in the shadow of recession,” which is actually a story about freelancing out of necessity in the bleak job market. Individual cases of human struggles to survive economically are told along with the some of the societal changes which contribute.

There are a few statistics but for an economics article, the piece is surprisingly vague. Perhaps the haziness indicates the LA Times has no clue what’s wrong. It mentions “automation and outsourcing” in one sentence to explain business’ lack of hiring but with no further analysis. Immigration and the surplus of unskilled foreign workers are not discussed at all, even though Los Angeles County (which is jammed with non-Americans) has nearly two million discouraged, somewhat employed persons, 17.8 percent.

The story doesn’t discuss California’s oppressive business regulation, but the topic shows up among numerous comments:

Historically small business hire the most. I owned a small business for over 30 years. I sold it 3 years ago and I’m now happily retired. My company had around 50 employees; sometimes more, sometimes less. It was primarily a blue collar type operation. Dealing with employees is never easy. For a small company without a sophisticated HR department it has become incredibly difficult and stressful.

New regulations are constantly piled on. The lawyers are always coming up with news ways of blackmailing you and making your life miserable. A few years ago it was ADA suits. The latest is time issues; breaks, OT, etc.

The worst thing to deal with is probably workers’ compensation issues. A claim may start out with a legitimate injury. Once the doctors, clinics and lawyers get involved, a minor injury can easily balloon to over a $100,000 claim. Soon your workers’ comp insurance becomes unaffordable.

My company always paid 100% of our employees medical insurance. If an employee goes to the doctor or visits emergency, the first question they are asked is often if the reason for the visit is work related. Language issues may mistakenly cause a non-work related problem become one. Once it is classified work related, it is difficult to undo. Before the company becomes aware of the “injury”, thousands of dollars may have been spent on tests, etc. One or two if such erroneous claims in a year will cause your insurance to skyrocket.

My point is why have employees if you can use contractors or off the books help?

California once again seems to be the periscope to the dysfunctional future. Nobody in the political class knows or cares that automation and robotics are quietly taking jobs that were earlier performed by humans. From milking cows to turning speech into text, the need of business for humans is shrinking.

The graph below comes from a July CIS report Immigrant Gains and Native Losses In the Job Market, 2000 to 2013. The paucity of jobs created over 13 years is particularly noteworthy, while population growth is moving ever upward. 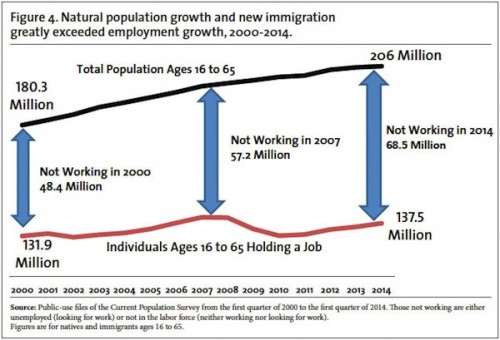 Certainly, over-regulation, growing use of smart machines and a huge surplus of alien or immigrant workers have combined to create a terrible job climate for American workers in California. Near the end, the piece quotes an estimate that by the end of the decade, half the American workforce could be freelance. They might be the lucky ones in the increasingly post-human economy.

A short gig doing security for the True Blood television show. A stint driving for a rental car company. A week as a customer service representative at a retail store.

This is how Delvontaie Antwine, 34, makes do in California’s economic recovery — earning a few scattered paychecks a month from odd temp jobs while living with relatives in Silver Lake.

Each week, he goes to a career center, where recently he was looking into positions transporting patients for Kaiser Permanente.

“I just need something consistent; otherwise, I’m like a puppy chasing its tail,” he said. “I’m at the bottom of the totem pole right now.”

It’s a purgatory sometimes called the gray economy. Although the official state unemployment rate dropped to 7.4% in June, 16.2% of Californians — or about 6.2 million — were either jobless, too discouraged to seek work, working less than they’d like or in off-the-books jobs. That’s the highest rate in the country, tied with Nevada. The rate is higher, at 17.8%, in Los Angeles County, where nearly 2 million people aren’t fully employed.

It’s hard to track the growth of the gray economy because so many employers hide workers for tax purposes. Experts generally agree, however, that the ranks of the underemployed swelled during the recession — more than in past downturns — and have remained substantial in an unsteady recovery.

“This segment of the labor market is a barometer for the economy as a whole,” said Nik Theodore, an urban planning professor at the University of Illinois at Chicago. “As employment insecurity spreads across the economy, more and more workers are being forced to turn to the street, to odd jobs, to becoming on-call workers. The question is whether this is a cyclical change, a blip or a signal of something much more fundamental.”

Those on the fringes of the official economy include farmworkers and nannies, even finance professionals and adjunct professors. They’re freelancers, day laborers, off-the-books vendors and all-cash contractors.

For some, informal work is a welcome change of pace from rigid corporate schedules. And some experts see an economic future that relies far more on self-employed workers.

Often, though, such workers are toiling without job security, benefits or career development opportunities.

“It’s pretty dismal,” said Economic Roundtable researcher Yvonne Yen Liu. “It leads to high rates of poverty and income inequality, and it doesn’t bode well for our ability to get back on our feet and be a prosperous region.”

Some of California’s larger industries, such as manufacturing and agriculture, have historically relied on contract workers. Now, contract workers are also showing up on public works construction projects or making delivery runs for retailers out of Inland Empire warehouses.

In San Francisco and Los Angeles, where the wealthiest residents are recovering fastest from the downturn, demand is surging for pay-as-you-go services such as housekeeping, physical training and massages.

Meanwhile, larger companies are still shy about hiring back the full-time workers they spent the recession replacing with automation and outsourcing. Healthcare costs are rising. Employers are downsizing their office space to ease the burden of rising rents.

A contingent workforce allows employers to be more financially flexible. They can invest less on training and issue a paycheck only when there’s demand for labor.

But being a shadow worker is risky. It’s a demographic that’s always in flux, constantly mobile, often working multiple jobs at once.

The chronically underemployed are at risk for low self-esteem and rising alcohol use and depression, according to the Society for the Psychological Study of Social Issues.

Informal workers also tend to be underpaid. They have no benefits — sick pay, employer-funded health insurance or retirement accounts. They’re not protected by minimum-wage laws.

In 2011, employers using off-the-books workers cost California $17 billion in revenue by not paying into state and federal social insurance programs, according to estimates from the Economic Roundtable.

In July, Gov. Jerry Brown signed legislation to expedite hearings for employees hurt while laboring without workers’ compensation insurance. Illegally uninsured employers use their lower costs to undercut rivals’ bids, while causing insurance premiums for businesses across the board to rise, experts said.

“Legitimate businesses are having difficulty staying in business because everybody wants to pay as low an amount as possible,” said Carole D’Elia, executive director of independent state oversight agency the Little Hoover Commission, which is currently studying the underground economy.

Jacob Sundstrom, 22, graduated from college last year with good grades and aspirations of becoming a sportswriter. But he couldn’t find a full-time position and now lives with his parents in Fontana.

He freelances online articles and graphics for advertising and websites. Occasionally, he’ll take a one-off odd job, helping with data entry, calculating baseball statistics, even running the scoreboard at a minor league game.

“The situation is awful — I have student loans, $2,000 in credit card debt and the hope that someday it will get better,” he said. “You get up every day and keep doing it and just hope that working hard enough will be worth something again.”

The number of day laborers remains high in California, and they’re not just looking for construction gigs, Theodore, the Illinois professor, said. Former factory workers, service providers, restaurant employees — and more American-born workers than ever — are gathering at unregulated hiring sites to look for work, he said.

They’re not tied to regular commuting patterns and are less likely to buy property. They delay marriages and births. They increasingly live in group housing and work in collective spaces, said Steve King, a partner at Emergent Research, which studies small businesses.

Apps and websites that make it easier for contractors to find and be paid for piecemeal work — such as Taskrabbit, PayPal and Square — are proliferating.

“The social changes are fascinating and deep across our society,” King said.

Nationwide, more than half of college graduates are over-educated for their jobs, according to the Center for College Affordability and Productivity. In California — which has an above-average number of graduates — the percentage is probably higher.

But some workers in California and elsewhere aren’t so sorry to give up the traditional 9-to-5 working life. Breaking away from a rigid schedule and a single employer offers a measure of freedom that appeals to their sense of entrepreneurship.

Many are driving for ride-sharing services such as Lyft, renting out their homes to travelers on AirBNB or selling items on mobile marketplaces such as Etsy. A state law went into effect last year that allowed certain foods to be made in private homes and sold to the public.

The number of so-called non-employers — businesses with no employees, largely made up of people working for themselves — slipped at the beginning of the recession. But it has soared since, rising more than 10% between 2006 and 2012 to 2.9 million in the state, according to the U.S. Census Bureau.

The Freelancers Union, a national nonprofit that provides health insurance to its members, said its ranks have increased from 46,700 in 2007 to more than 240,000 this year.

Half of the U.S. workforce could be freelance by the end of the decade, the organization predicts.

“People made a good trade-off 50 years ago — working 40 hours a week to have a home, send their kids to college and retire — but now they’re asking why they should have a full-time job if there’s no job security or benefits,” said Sara Horowitz, the group’s founder and executive director. “Freelancers are really redefining work, creating a new paradigm.”