Friday’s release of jobs data for September showed unemployment up and weak job growth—but more significantly, in a development apparently only tracked by VDARE.com, immigrant displacement of American workers is now at its second-highest level for the Obama years. (August was the highest). Additionally, there’s continued evidence that an unreported immigration surge is underway, right in time for the election season.

Rarely has the relationship between the immigration and employment issues been as clear. Over the past 12 months (September 2015 to September 2016) seasonally unadjusted BLS data show:

Employers added 156,000 jobs in September 2016, a troubling decline from the 178,000 average for 2016 year to date. The “other” employment survey, of households rather than employers, shows a more robust job performance for the month.

Native-born American workers have lost ground to their foreign-born competitors throughout the Obama years, but the trend has accelerated significantly over the past few months. The displacement of native-born Americans by immigrants hit an Obama-era high in August. September 2016 ranks second worst among the 93 months of Obama’s tenure in the displacement of American workers by immigrants. This is brought out in our New VDARE.com American Worker Displacement Index (NVDAWDI) graphic:

During the Obama years immigrant employment has risen 4.7-times faster than American employment – 20.8% versus 4.4%. In many unskilled occupations the job growth gap is far larger, owing to the disproportionate number of foreign-born workers.

In February 2009, President Obama’s first full month in office, 14.972% of all persons working in the U.S. were foreign-born. The foreign-born share in September was 17.204%, the second highest among the 93 months of Mr. Obama’s administration. The Obama era high, 17.216%, was set in September.

Six of the 10 worst months for native-born workers in the Obama years (measured by the share of jobs held by immigrants) have occurred in 2016.

The foreign-born share of total employment in September was 2.23 percentage points above the level recorded in February 2009. With total employment now at 152.0 million, this implies that Obama-era immigration may have pushed as many as 3.39 million native-born Americans onto the unemployment rolls since then. 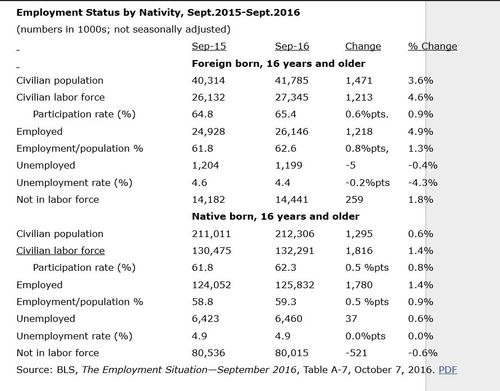 Other things equal, faster labor force growth should portend higher unemployment rates – but this calculus does not seem to apply to immigrants. By settling for wages which most native-born workers find unacceptable, they have achieved lower unemployment despite a rapidly growing labor force.

The winners—besides the immigrants themselves—are business elites and others in the top 1% who receive income from their capital rather than their labor.

The population figures are even more problematic. The number of working age immigrants rose 1.471 million in the 12 months September 2015 to September 2016. That is larger than the commonly cited figure of 1 million per year for net legal immigration of all ages.

Are illegals filling the gap? Or refugees that we do not know about?