Instead of immediately shutting down one of America's stupidest visa programs, which helped bring us yet another murder-minded jihadist this week, bipartisan Beltway politicians are pushing to preserve and expand the illegal immigration pipeline. Republicans and Democrats in Congress want a "fix" for the Obama administration's executive amnesty covering nearly 700,000 illegal immigrants—and they want it pronto. 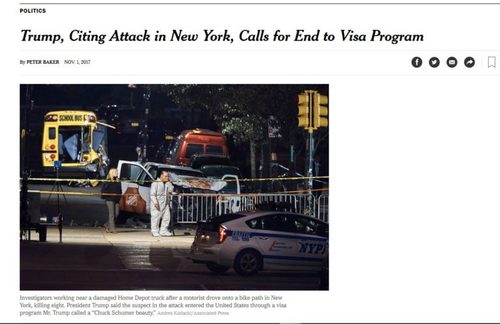 You remember the hue and cry over the diversity visa lottery, right? It was just seven short weeks ago when America discovered that New York City truck jihadist Sayfullo Saipov, who ruthlessly mowed down eight people on a bike path, had entered our country from Uzbekistan in 2010 by pure, random luck through the DV lottery program. President Donald Trump called on Congress to end it. Saipov followed in the footsteps of Hesham Hadayet (right) the Egyptian-born LAX jihadist who gunned down two people at Israel's El Al airlines counter in 2002 and gained entry through his lottery-winning wife; Imran Mandhai, the Pakistan-born jihadist who plotted National Guard armory bombings in Florida and gained entry through his parents' lottery luck; Abdurasul Hasanovich Juraboev, another Uzbek jihadist and lottery winner convicted of supporting terrorism; Syed Ahmed, a Pakistan-born jihadist and DV recipient convicted of terrorism-related activities in the U.S. and abroad in 2009; and Mousa Mohammed Abu Marzook, a Hamas leader deported for terrorism activities in 1997 who had snagged a green card thanks to the DV lottery program's original iteration.

Up to 55,000 lucky winners a year have secured permanent residency visas (green cards) through the diversity visa lottery since 1990, which put them on the path to American citizenship ahead of millions of other foreigners patiently waiting to come to this country. The green card lotto winners' spouses and unmarried children under 21 all get lottery passes into the country, too, no matter where they were born. Chain migration extends the families' winnings. And so on, and so on, and so on.

As I've reported tirelessly since 9/11, when counterterrorism experts and immigration watchdogs united against the fraud-riddled, ill-conceived DV lottery, applicants don't even need a high school education. No outstanding abilities, training or job skills are necessary. Illegal aliens are eligible if a legal family member wins the jackpot. Tens of thousands are pouring in from terrorism breeding grounds through the lottery unvetted, unmonitored and unassimilated.

Justice Department investigators recently discovered one Somali woman who won the DV lottery and subsequently recruited an entire fake family, including a phony husband and two fictitious adult children, all of whom came to the United States and later gained U.S. citizenship based on their false claims.

And a State Department official testified [PDF] in 2011 that in Bangladesh, "one agent is reported to have enrolled an entire phone book so that he could then either extort money from winning applicants who had never entered the program to begin with or sell their winning slots to others."

As usual, however, Congress has done precisely nothing to stop the ruinous racket created by the late Teddy Kennedy and signed off by President George H.W. Bush as a social engineering experiment to admit more "underrepresented" immigrant minorities into the U.S. The latest bill containing an end to the DV lottery program, the "RAISE Act," sponsored by Sens. Tom Cotton and David Perdue, is gathering dust. Sen. Chuck Grassley's latest call to the State Department for a "full-scale" review has yielded no movement.

And now, here we are, with yet another DV lottery beneficiary in custody for yet another jihad attack. Bangladeshi Akayed Ullah arrived here with a golden ticket obtained through a relative who won the visa lottery. Before strapping on his failed suicide vest on Monday in an attempt to inflict "maximum destruction" on commuters at the New York Port Authority bus terminal, Ullah was the minor child of a sibling of the original ticket holder, who became a naturalized U.S. citizen.

Seven weeks ago, Sen. Jeff Flake smugly tweeted to President Trump that the DV lottery program would have been killed if only the Gang of Eight illegal alien amnesty had been signed into law. In D.C., you see, stupid government programs will only die if hitched to even bigger, more reckless legislative abominations.