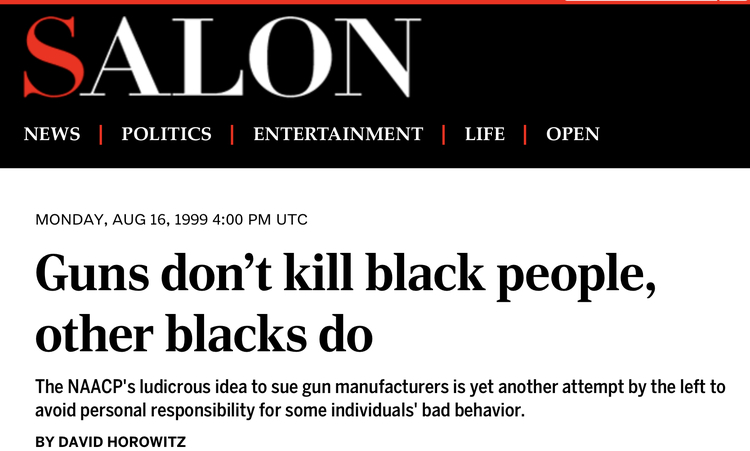 David Horowitz Protests That We're Not Familiar With His Work, But We Are

From: David Horowitz Email him

Patrick Cleburne's post Guns Don't Murder. A (Certain Type Of) Person Murders reminded me that neoconservative David Horowitz published an article in the liberal Salon magazine with, incredibly, a much stronger title:Guns don't kill black people, other blacks do...

Why "incredible" that my title is stronger? You can't be familiar with my work. Try this one I recently wrote, "Black Skin Privilege".

David Horowitz is the founding editor of FrontPageMag.com. His biography is here.

James Fulford writes: I am, in fact, familiar with Horowitz’s work, and generally an admirer of it. I have Radical Son

I also have a souvenir copy of Corporations and the Cold War, from his New Left, anti-Vietnam period, something he’s renounced and apologized for. If I ever get a chance to meet him, he can autograph it or tear it up and burn it, his choice.

I said "incredibly" because I thought that Horowitz represented the (pardon the expression) neoconservative point of view as opposed to Patrick Cleburne's paleoconservatism. In this case neoconservatism represents the moderate middle ground between VDARE.com on one side and the NAACP and Eric Holder on the other.

I also remembered—I really am familiar with this stuff—that he said back in the day that the title had been put on by Salon's editors. (See I Need Your Help, By: David Horowitz,FrontPageMag, September 1, 2000)

I haven't been following his recent work enough, however, and I'm not surprised that he’s been doing good work on the Trayvon Martin case, et cetera.