“Is It Time for the Jews to Leave Europe?” Only Because “Anti-Fascism” Has Resulted In Mass Third World Immigration 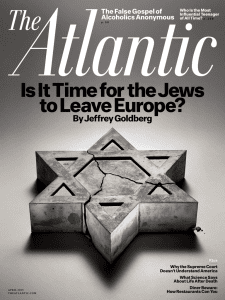 After September 11, neoconservatives began using the neologism ‘Islamofascism’ to gin up support for American intervention in the Middle East. As fighting the fascists in World War II was the one “good war” in popular imagination, calling Muslims “fascists” was expedient propaganda.

Now that Islamic terrorism is an almost regular event in Europe, Jeffrey Goldberg of The Atlantic has taken the tactic a step further. He argues that “Renewed vitriol among right-wing fascists and new threats from radicalized Islamists have created a crisis” for European Jews, who should consider fleeing the Continent to avoid the impending pogroms. [Is It Time for the Jews to Leave Europe? April 2015]

Yet Goldberg [Email him] fails to produce much evidence of a fascist threat. In fact, he fails to document a single incident of right-wing anti-Semitic violence in Europe—or even an anti-Semitic statement.

Nonetheless, Goldberg implies that the rise of the National Front in France represents a threat to the Jews. After all, one Jew he interviews states, without any examples or evidence, that he does not “trust [Marine] Le Pen. “

Goldberg actually interviews Le Pen, whom he acknowledges has promoted a philo-Semitic National Front. Yet, despite her assurances that “Jews have nothing to fear from the National Front,” Le Pen is still suspect for Goldberg because she has not denounced her father, Jean Marie Le Pen, whom we are told led a National Front that was “openly anti-Semitic,” filled with “thugs in leather jackets,” and made “public expressions of longing for Vichy.”

Goldberg did not bother to provide evidence for any of these claims, probably because none exists. (Space constraints can’t be his excuse: the piece was over 11,000 words!)

The sole facts he used to document the Front National’s extremism: its former leader Jean Marie Le Pen was filled with “Holocaust obsessiveness.” The basis for this charge? In 1987, Le Pen said: “I ask myself several questions. I’m not saying the gas chambers didn’t exist. I haven’t seen them myself…But I believe it’s just a detail in the history of World War II.”[Frenchman Fined For Remark, Sarasota Herald-Tribune, May 23, 1990]

If you have to go back nearly 28 years in the past and 15 years before Le Pen’s political peak to find a controversial statement on the topic, I’d say it doesn’t quite qualify as “obsessiveness.” Nor, for that matter, did Le Pen “deny” the Holocaust—it just appears he did not ascribe sufficient gravity to the event. But even Winston Churchill did not mention the Holocaust once in his six-volume history of World War II—and only mentioned Nazi anti-Semitism in one footnote.

In fairness, Goldberg does acknowledge that the “chief propagators of contemporary European anti-Semitism” are Muslims. But he somehow manages to still blame the Right. Still, the only alleged concrete connection between Islamists and the Far Right he can dig up is that they both opposed French president François Hollande, and that French-Cameroonian comedian Dieudonné and idiosyncratic intellectual Alain Soral have an “ideological partnership”—

[T]he new anti-Semitism flourishing in corners of the European Muslim community would be impoverished without the incorporation of European fascist tropes. Dieudonné M’bala, a comedian of French Cameroonian descent who specializes in Holocaust revisionism and gas-chamber humor, is the inventor of the quenelle, widely understood as an inverted Nazi salute. His followers have taken to photographing themselves making the quenelle in front of synagogues, Holocaust memorials, and sites of past anti-Jewish terrorist attacks. Dieudonné has built an ideological partnership with Alain Soral, the anti-Jewish conspiracy theorist and 9/11 “truther” who was for several years a member of the National Front’s central committee. Soral was photographed not long ago making the quenelle in front of Berlin’s Holocaust memorial.

But Goldberg fails to note that neither man is right-wing or a Muslim. Dieudonné is a Catholic, who had previously campaigned against the National Front’s alleged racism. And as Goldberg begrudgingly acknowledges, much of his “anti-Semitism” is largely for shock humor in the same vein as Charlie Hebdo, but attacking a different sacred cow. Dieudonné eventually became friends with Jean Marie Le Pen, but never indicated any sympathy for his politics.

Soral spent most of his career as a Marxist, but began to identify with the National Front on some cultural issues. However, he still considers himself a man of the Left. And he quit the party in 2009 specifically because he believed it was anti-Islam [The online politics of Alain Soral, by Evelyne Pieller, Le Monde Diplomatique, November 2013].

Why two idiosyncratic non-Muslim Leftists becoming friends signifies a union between Muslims and fascists is beyond me.

Goldberg also blames Europeans for Muslim anti-Semitism and support for terrorism because the “failure of Europe to integrate Muslim immigrants has contributed to their exploitation by anti-Semitic propagandists and by recruiters for such radical projects as the Islamic State, or ISIS.”

Even if this were true, if Europe had listened to the “Far Right” and not let millions of Muslims into the continent in the first place, there wouldn’t be any potential for them to be radicalized.

Those British Muslims who verbally abuse British Jews on the street are more likely to shout “Heil Hitler” than “Allahu Akbar” when they do so. This is despite the fact that their parents and grandparents were probably chased through the very same streets by gangs of neo-Nazi skinheads shouting similar slogans.

Putting aside Rich’s absurd claim that neo-Nazi violence was ubiquitous in post-World War II Britain, when mass immigration began, Muslims surely yell “Heil Hitler” when attacking Jews because they know it upsets Jews—not because they read Mein Kampf. Moreover, Goldberg does not explain why Jews should be more concerned about Muslims yelling “Heil Hitler” instead of “Allahu Akbar” when attacking them.

The underlying reason: many Jews are still emotionally preoccupied with the supposed threat from Nazism. As Marine Le Pen attempted to explain to Goldberg:

“The reality is that there exist in France associations that are supposedly representative of French Jews, which have stuck with a software that came out of the Second World War,” she said, meaning that members of the Jewish leadership are still preoccupied with the threat of Nazi-like fascism. “For decades they have continued to fight against an anti-Semitism that no longer exists in France, for reasons of—how should I say this?—intellectual laziness. And by a form of submission to the Politically Correct. And while they were doing this, while they were fighting against an enemy that no longer existed, an anti-Semitism was gaining force in France stemming notably from the development of fundamentalist Islamist thought.

Yet Le Pen’s point is lost on Goldberg.

He also interviews Wisconsin-born Barbara Spectre [Email her] founding director of something called Paideia, the European Institute for Jewish Studies in Sweden, who tells him Jews “are not naive people, and they are not suicidal. They grew up with a full understanding of the Holocaust and its implications.”

But if anything, current events in Europe show this Jewish obsession with stopping “the next Hitler” is incredibly naïve, simplistic, and short-sighted. Although Goldberg is apparently unaware of this, Barbara Spectre has gained worldwide notoriety with her videotaped comment:

I think there's a resurgence of anti-Semitism because at this point in time Europe has not yet learned how to be multicultural, and I think we're gonna be part of the throes of that transformation, which must take place. Europe is not going to be the monolithic societies that they once were in the last century. Jews are going to be at the center of that. It's a huge transformation for Europe to make. They are now going into a multicultural mode, and Jews will be resented because of our leading role. But without that leading role, and without that transformation, Europe will not survive.

I believe that, contrary to Specter’s self-congratulation, her views reflect an almost perfect misinterpretation of the Holocaust and its lessons. Because of paranoia that homogenous European countries would inevitably lead to a Nazi resurgence, Jews like Spectre have promoted Open Borders and the admission of Muslim immigrants who actually were anti-Semitic.

In the first lines of his 1995 Immigration book Alien Nation: Common Sense About America’s Immigration Disaster, VDARE.com editor Peter Brimelow described mass immigration as Hitler’s posthumous revenge on America. The same can be said about Jews in Europe. By promoting mass immigration, Jews such as Spectre are helping Muslims finish the job that Hitler failed to do.

And that’s the closest we get to anything we can call a genuine “Islamofascism.”