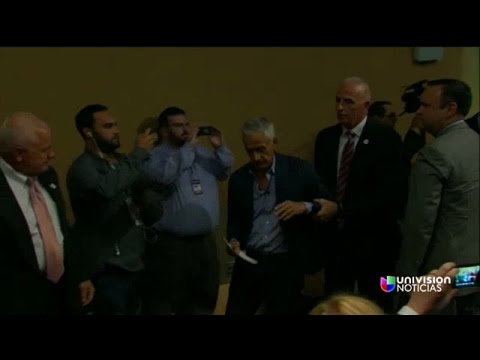 Half a month ago, poor old Bernie Sanders was feebly left speechless in Seattle by two fat angry black women who screamed him off his own stage:

Tuesday, in contrast, Donald Trump decisively responded to an ethnic grievance monger trying to take control of the Donald’s news conference by having a tall security guard escort the puny interloper out of the room until the man calmed down:

Trump, that magnificent bastard, made his enemy do the perp walk on International TV while appearing 100% in charge of the situation.

In contrast, most of the English language news media in America — finding Mexicans tedious except in the abstract — is shocked that Trump would be insensitive to some poor nonwhite immigrant.

But you know and I know the race man who wouldn’t stop talking wasn’t just some BLM nobody like in Seattle, he was Haim Saban’s blue-eyed boy, Jorge Ramos, anchorman of the Spanish-language Univision network.

Here’s my 2004 VDARE book review of Ramos’ The Latino Wave: How Hispanics Will Elect the Next American President. I wrote 11 years ago:

Ramos is a stealth superstar. If you don't speak Spanish—or read VDARE.com —you've probably never heard of him. …

Ramos is a man with a mission: keeping Latinos from fully assimilating into the American mainstream. He writes:

“I’m not one of those people who thinks that the common bond that unites those of us who live in the United States is the English language. No, I believe that this country’s two main characteristics are its acceptance of immigrants and its tolerance for diversity. These things are what bind us together; we’re here thanks to these unifying principles. That’s what it means to be an American. Not your ability to speak English. Talk to me in Spanish … or at least try. I sometimes go entire days without having to speak a single word of English…”

Of course, if Americans be persuaded that English is no longer the nation’s common bond, Hispanics can continue watching Univision’s Spanish-language broadcasts.

Mr. Perenchio [the Italian-American previous owner of Univision and Ron Unz's arch-enemy during the Prop. 227 battle over bilingual education in California] must be pleased to have such a loyal lackey. Reading this book, I lost track of how many times Ramos argues that various politicians doomed their campaigns by not buying enough spots on Univision. …

Whether or not it’s bad for America, it’s good for his bank account.

Besides, what does he care? He remains a Mexican citizen even after 21 years in the U.S.

Since Ramos wrote The Latino Wave in Spanish for his Spanish-speaking fans (it was translated by Ezra E. Fitz), he can be franker than mass immigration apologists usually are when addressing an English-speaking audience. He gloats:

“But while no fighting is taking place on the military or legal fronts, there is fighting going on culturally. It’s the Reconquest. Latinos are culturally reconquering lands that once were part of the Spanish empire…”

Accordingly, much of Ramos' argument will be more familiar to readers of VDARE.com than to the gullible readers of the Wall Street Journal Editorial Page. Thus while Ramos pays lip service to “proposition nation” ideology to con non-Hispanics into allowing unlimited immigration into their country, he clearly believes that ethnicity and demographics matter. And he wants his ethnic group to win.

In 2007 Jerry Perenchio sold Univision to a consortium led by Haim Saban, who has been perhaps the biggest single contributor to Hillary Clinton’s campaigns over the years.

Of course, Trump is well aware of all these convoluted personal interests at play. Chuck Ross wrote for the Daily Caller in June:

With Univision’s decision to sever ties with the Miss Universe pageant — which is controlled in part by Donald Trump — the Republican presidential candidate and his camp are questioning the Hispanic media outlet’s move, saying that the company was reacting to pressure from Mexico and its owner, Haim Saban, who is a big Hillary Clinton supporter.

“[Univision is] put under a lot of pressure, in my opinion, by the Mexican government to get [me] to not talk about trade and the southern border,” Trump told The Daily Caller on Thursday.

“The biggest people in Univision, they’re all supporting Hillary,” he added. “I think that had a lot to do with it. They see how I’m doing in the polls,” the real estate billionaire continued, citing a recent poll from Suffolk University which shows him in second place in New Hampshire behind Jeb Bush.

“They know that I’ll beat [Clinton] if I run against her,” Trump said.

The Trump campaign is like 14 years of iSteve blogging about the behind-the-scenes interests playing out in real time.

Thirty years ago, I would have felt that emphasizing the Hillary-Haim-Jorge connection was unseemly. What matters is not the grubby little conspiracies, but the principles at stake!

A commenter submitted a very interesting quote from Trump about what changed when the Cold War was won. I haven’t been able to dig it up, so I’ll just riff off my vague memory. Trump argued that during the Cold War, long-term strategizing was highly important. But in the post-Cold War era, Trump’s skill set of tactical negotiating strengths has risen in relative value.

Like everything Trump says, this was self-interested. But it’s also interesting. Trump is sort of the anti-Reagan in the sense that Reagan was, for an ex-actor, surprisingly impersonal, more interested in enduring principles than in current personalities. (It drove Reagan’s kids crazy that he seemed less interested in their troubles than in the country’s.) Movie audiences tended to responded to him most when he could play to his natural strong suit as a high-minded idealist, such as in Reagan’s big 1951 hit Bedtime for Bonzo.

Trump, in contrast, is quick to point out his opponents’ mercenary biases. When Trump bothers to enunciate principles, as in the brilliant opening to his immigration position paper, they’re generally sensible. But he seems more aware than anybody else that we’re living in Fukuyama’s End of History when history hasn’t ended, just ideological sincerity. Political actors now are motivated less by economic theories than by whatever are the personal or identity group scams they happen to be working.