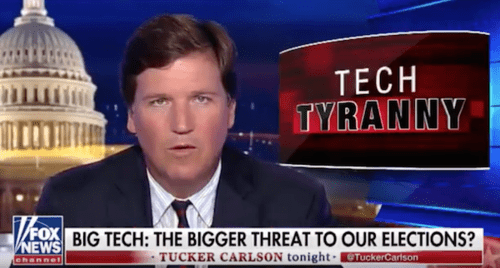 Good on Tucker Carlson for keeping up his investigation of Big Tech’s manipulation of what appears on people’s computer screens with the aim of affecting American elections and electing liberals like Hillary Clinton. 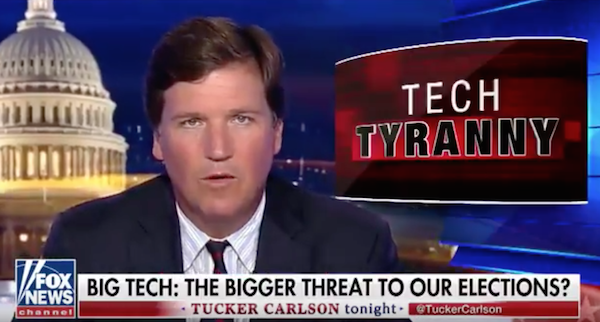 In a September 20 segment, Carlson examined the Google response to President Trump’s so-called “Muslim ban” (a temporary measure which was quite popular among GOP voters according to a Rasmussen poll). But Google employees thought that shutting the door even a little on Western Civilization’s historic enemy was just mean.

Remember that under the Obama administration, Muslim immigrants got priority, so it’s only fair for President Trump to chill in response (Chart: Obama Admin. On Pace to Issue One Million Green Cards to Migrants from Majority-Muslim Countries, Breitbart.com, June 17, 2016).

Much of this criticism is based on the work of psychologist Dr. Robert Epstein (@DrREpstein), who has penetrated Big Tech’s propensity to manipulate in favor of liberal causes and politicians. One of the worst secret influencers is what Google search turns up. See Tucker’s interview with Dr. Epstein here: Big Tech Threatens to Secretly Undermine American Elections.

Back to Thursday’s report:

TUCKER CARLSON: Tonight, we have a development in our ongoing exclusive investigation into the behavior of Google. There are new emails first obtained by this show.

Now Google, as you know, is the most powerful company in the history of the world. Virtually all human information flows through its software. And for that reason, Google shapes much of how the world understands reality.

At the heart of Google’s business is its search engine which has a virtual monopoly on search in this country and others. Google search succeeds because it is blindingly efficient but also because it is perceived as honest. When you search for a term on Google, the most popular results come to the top. The process is straightforward and democratic: that’s what most people think. That’s how it’s perceived, and that’s why the world trusts Google.

But what if Google was lying to you? What if the results that you got were secretly weighted to get you to vote a certain way, to believe a certain thing? That would affect a lot of people and a lot of votes.

In fact, it would be impossible to have a real democracy under circumstances like that. A small number of incredibly rich people would be in charge of everything including your perceptions.

Well that is a major concern for all of us because Google is a very political company. We recently showed you email evidence of the Google effort to collude with a left-wing group in support of Hillary Clinton’s presidential campaign.

Now tonight, we have internal documents that show that Google employees discussed corrupting the company’s search engine to push propaganda on hundreds of millions of unsuspecting users.

Here’s what happened. Shortly after taking office, President Trump issued his now-famous travel ban. Almost immediately after that, Google employees began plotting ways to undermine the President’s Executive Order. On January 29th, a Google Product Marketing Manager named Mackenzie Thomas sent an email to a group of fellow employees. “There is a large brainstorm going on throughout the marketing org” she wrote, brainstorming about how to respond to Trump’s order.

Among Thomas’ ideas was “To actively counter algorithmically biased results for search terms such as Islam, Iran, Mexico, Latino and so forth.” In other words, Google employees wanted to alter the search results to make them more positive in certain cases for political reasons. Thomas also suggested promoting links for making donations to organizations fighting the travel ban.

This, of course, would be completely dishonest and unethical behavior. But Thomas’ colleagues at Google seemed to approve of it strongly. Product Manager Rami Banna, for example, replied this way. “We’re absolutely in, Mackenzie, anything you need. We’ll put together a list of orgs with Meryl and HL team.”

Another employee named Stacey Chen added that group she thought Google should promote included the ACLU, the Immigration Defense Project, the Arab-American Anti-Discrimination Committee and the National Immigration Law Center. All of those groups were at the time agitating against the President’s immigration ban.

Even at least one person on the chain seemed to realize how dangerous and out of the ordinary this conversation was. A Google employee called Clement Wolf commented that he was “very much in favor of Google stepping up” but was wondering “How partisan we want to be on this? To the extent of my knowledge, we’d be breaching precedent if we only gave highlights access to organizations that support a certain view.”

We contacted Google about these remarkable emails and the reply to us is here in full.

“These emails were just a brainstorm of ideas, none of which were ever implemented. Google has never manipulated its search results or modified any of its products to promote a particular political ideology – not in the current campaign season, not during the 2016 election, and not in the aftermath of President Trump’s Executive Order on immigration. Our processes and policies would not have allowed for any manipulation of search results to promote political ideologies.”

Left unanswered by Google was why anyone would believe that statement for a second. Nor did Google say anything about the employees on that email chain. Presumably, they still work at Google which is remarkable. If you ran a bank and caught your tellers brainstorming about how to rob the vault, would they still work for you? Remember that Google fired an engineer called James Damore last summer almost instantly.

The CEO flew back from family vacation to fire him. Why? Because Damore was caught expressing mildly conservatives ideas in a private memo. Here, Google employees are plotting to subvert our entire public conversation secretly. But that’s fine with Google. It shouldn’t be fine with any of us or with the U.S. Congress. Google executives are scheduled to testify on Capitol Hill next week. The scheduled topic is privacy. But it would be nice if at least one elected representative asked about this because it’s much scarier than anything Russia ever attempted.

Peter Schweizer wrote “Clinton Cash.” He now has a fantastic new documentary called “The Creepy Line” about big tech and he joins us tonight. Are you surprised by this?

PETER SCHWEIZER: Not really. It’s just further confirmation that Google has been cooking the books as it relates to search.

CARLSON: But this is so corrupt that it’s — I was stunned by it, and I was worried that these emails were not authentic because it’s such a big . . . so search is the core of Google’s business. It’s many different things, Google, but basically, it’s a search engine. It was built on the back of one. And the promise has always been that they’re not lying to you. But they are.

SCHWEIZER: That’s right. And this is really the third strike as far as I’m concerned. The first strike, of course, is the commercial search. When travel websites and people like Yelp were complaining that they were, you know, tilting the algorithm, you know, against them to others, Google said “Absolutely not. We would never do that.”

We now know the Federal Trade Commission, the EU, and others have looked at this and said Google was fiddling with the algorithm. The second strike as far as I’m concerned was the work done by Dr. Robert Epstein which shows clearly in 2016 that search was tilted to favor Hillary Clinton. This is strike three. It shows that the culture of the company is such that they’re very happy having a free and open conversation about manipulating the algorithm on a highly political subject.

CARLSON: But I don’t understand. I mean so people go to jail for violating our campaign finance laws because they put an extra ad on some cable channel nobody watches. This is the most powerful company in the world.

How can we have a democracy in a country where Google can just get whoever it wants elected by lying to us through the search function?

SCHWEIZER: It’s a great example, Tucker, of regulations and campaign finance laws not keeping up at all with where we are in technology. Nobody could see when we pass laws about in-kind contributions to campaigns from companies that something like this would happen.

But this is the ultimate, the ultimate campaign contribution. This is not like, you know, Exxon giving gasoline to a political campaign. This is a company secretly tipping the scales in favor of candidates or causes or beliefs that they have. It’s done in secret. We don’t know how extensive it’s happening. And 80 to 90 percent of search in the world is basically done through Google, so they have complete dominance in this area.

CARLSON: And the Congress does nothing. And I can think of at least one Republican senator who I believe has been bought off by Google. I don’t think he’s alone. At some point it might be worth naming who those people are. Peter, great to see you.