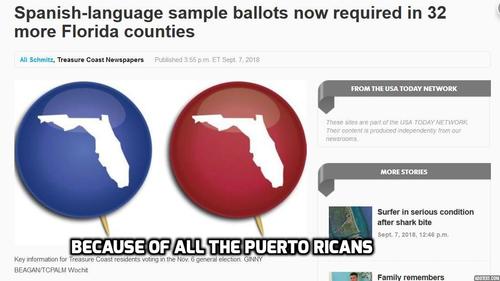 For Democrats, Puerto Rico is the gift that keeps on giving because it’s a U.S. territory and its people can keep migrating to the U.S. and helping the Democrats wherever they choose to reside.  They’re already citizens, remember.

That’s a funny way of putting it.

"Voting in a language you do not understand is like asking this Court decide the winner of the Nobel Prize for Chemistry—ineffective, in other words," Walker said in the opinion.

Yet more evidence we need an official declaration that English is the official language of the United States.   And we should have no more Spanish used in U.S. politics or on ballots.

The lawsuit was filed by a coalition of groups that advocate for civic engagement for Latino voters against the Department of State and 32 elections supervisors throughout the state.

The State Department and election supervisors argued that with only two months left before election day, it might be difficult for them to institute all the changes the groups asked for in such a short time span. Walker agreed with them, but said Puerto Rican voters still deserve equal treatment.

“Puerto Ricans are American citizens,” he wrote. “Unique among Americans, they are not educated primarily in English—and do not need to be. But, like all American citizens, they possess the fundamental right to vote. The issue in this case is whether Florida officials, consistent with longstanding federal law, must provide assistance to Puerto Rican voters who wish to vote. Under the plain language of the Voting Rights Act, they must.”

Get that, Judge Walker says of Puerto Ricans that …they are not educated primarily in English—and do not need to be.

Let’s suppose that Puerto Rico becomes a state.  How on earth can we make Puerto Rico an English-speaking state if we can’t even require Puerto Ricans to use English when they migrate to the mainland?