Mexicans are returning to Mexico, partially because of President Trump, but also as part of a trend occurring even before he was elected. On December 1, the Los Angeles Times ran three simultaneous articles (called chapters) by Kate Linthicum, all covering the return of Mexicans to the central Mexican town of Malinalco. Taken together, these three articles show us the problems already caused by decades of mass illegal immigration, the problems faced by Mexican illegals going back, and what we should do to maintain American sovereignty in the future.

Chapter 1, In Mexico, they made a new American dream — minus their kids, is about German (pronounced Hermán) and Gloria Almanza. This couple moved to the U.S. illegally in the mid-1990s, but their intention was always to return to Mexico. They had the plan of working in America, saving money, and then building a future in their own country.

For two decades, they were “toiling in factories and building, cleaning and repairing other people’s homes so that one day they could make a place of their own back in Mexico — a place to finish raising their two kids.” Their kids, both born in Texas, are automatically U.S. citizens because of the Anchor Baby loophole.

Besides money, the Almanzas “liked the orderliness of Texas, where police gave out tickets when people broke the law, unlike in Mexico, where a bribe could get somebody out of anything.” But they missed the social environment of Mexico and the feast-day celebrations. They were “unnerved” by the way American nuclear families had no connection to their extended families

Before moving back to Malinalco in 2012, German had been going back from time to time to build a nice new home (with American dollars). They seemingly fulfilled their dream, and the years after they returned “were the happiest” of their lives as they enjoyed success in “their impressive new house.”

Yet there were costs. Their U.S.-born children, a son and a daughter, “were struggling.”

At middle school in Malinalco, Danny’s clumsy Spanish was the butt of jokes. Bullies stole his backpack and tried to goad him into fights. They listened to Spanish rap and made fun of his taste for Coldplay.

In other words, Mexican students were intolerant of somebody born in another country who couldn’t speak the language well. (I thought that was only racist whites!)

Both children eventually returned to the United States when they were older. The daughter left even though she was pregnant (the article never says who the father was, presumably somebody in Malinalco).

Why didn’t she stay in Malinalco and have her baby close to mom (family values and all that)?

She knew that medical care in the U.S. would be better, and she feared that it might be a hassle getting the baby U.S. citizenship if the child wasn’t born on American soil.

In other words, the Anchor Baby grows up, and creates another Anchor Baby.

The two children, as well as an illegal alien cousin, resided in a trailer house in Texas. The new baby, now a citizen just like you and me, was duly born.

Financially, German and Gloria are doing fine in Malinalco. But the house designed for all the family is all but empty.

So now German wants to go back. Alas, “the border that allowed generations of migrants to cross easily back and forth between the U.S. and Mexico has become more rigid… A journey that once cost $500 now costs $7,000.”

This “journey” is also a Federal Crime—Entering Without Inspection, which can get you two years in jail.

Nearly 700 miles of border fence, which President Trump hopes to extend across the entire U.S.-Mexico dividing line, has forced migrants to take riskier routes and pay off the drug traffickers who increasingly control them.

The parents are back in Mexico, and the kids (and grandchild) are back in the United States. Author Kate Linthicum implicitly blames American sovereignty for this:

The border has always broken families. Generations of Mexican children grew up with a parent absent — Mom or Dad working in the U.S. and sneaking home for visits on Christmas and Easter. Now, a new generation of Mexican parents, deported or electing to return, is facing the same challenge and heartbreak.

But “the border” didn’t break families up. Bad governmental policies (in both the U.S. and Mexico) and the decisions of individual Mexicans did. 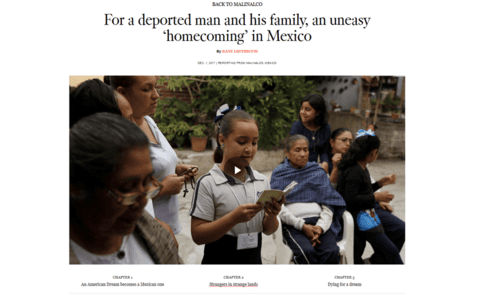 Chapter 2, For a deported man and his family, an uneasy ‘homecoming’ in Mexico, tells the story of Jose Roberto Tetatzin of Malinalco. He was an illegal alien in Michigan for ten years. Tetatzin was deported in 2015 because of a drunk driving conviction from 2013.

Tetatzin was deported under Obama, but President Trump had already begun his campaign, and it was already having an effect on Tetatzin. He

…scanned the streets for police or Immigration and Customs Enforcement agents. He knew something as simple as a broken taillight or a roll through a stop sign could start the domino effect toward deportation. In the end, it was his DUI that caught the attention of immigration agents. They stopped him a few blocks from his apartment on his way to work.

Tetatzin was later followed to Malinalco his wife, Judith Cristal Gudino, an illegal alien from another part of Mexico, her 7-year old daughter Angela (from a previous relationship) and Jose’s and Judith’s infant daughter Lesli.

But before leaving, “she sold all the cars, furniture and electronics they’d amassed during their decade in America” and made sure to wait until obtaining U.S. passports for Angela and Lesli. After all, they were American-born, and thus were U.S. citizens.

After arriving in Malinalco, Angela entered school and encountered a difficult situation.

Despite the fact that many American citizens have been enrolled at her school—nearly half a million children who are U.S. citizens are enrolled in Mexican schools, according to the government—there was not a single English-speaking teacher on campus. When she replied to her teacher’s questions in her native tongue, all he could do was shrug his shoulders apologetically while her classmates laughed.

Having worked in Mexican schools, I believe this. I once saw some 5th-grade girls mercilessly mock a Korean girl who had just moved to Mexico.

Still, the Tetatzin family seems to be doing well in Mexico. Jose actually feels better and has “re-immersed in the religious and cultural ceremonies he had forgotten while living in the U.S.”

Plus, now he can spend more time with his family, and he doesn’t fear the police as he did in Michigan. After all, you can pay them off in Mexico! And he’s not an illegal alien there! “At least here we are free” and “together,” in Tetzin’s words.

But we aren’t done with this family. According to Tetatzin and Gudino, Angela and Lesi will go back to the U.S. one day.

After all, they’re U.S. citizens! 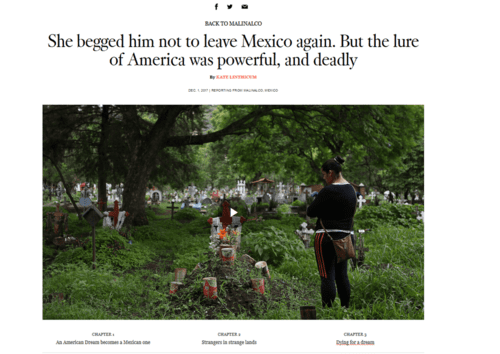 Chapter 3, She begged him not to leave Mexico again. But the lure of America was powerful, and deadly, is about Agustin Poblete Ortega, who spent years entering America illegally, making money, returning to Malinalco, and then doing it again.

We are told Poblete “was addicted to alcohol…he was also addicted to American wages.”  In America, he made $15 an hour; in Malinalco, he made just $10 a day.

When he left for his sixth foray into the United States, Poblete promised his estranged wife Rosa Icela Nava (who had moved out due to his drinking problem) that he was only going to the U.S. one more time.

He was right, though not in the way he expected. After sending word he was about to cross the border, he went missing. The Mexican consulate in El Paso eventually contacted his mother with the news his body had been found in the desert of New Mexico, presumably a fatality of the more arduous crossing. The body was brought to the state capital, Toluca, where Poblete’s wife had to go and identify it.

She is now a widow, left to care alone for the couple’s two young daughters Abril and Michelle.

We can draw four major conclusions from this series of articles.