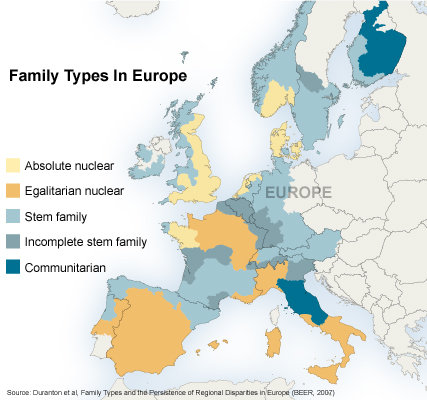 In the New York Times, Frank Jacobs offers a map of Europe based on traditional family structures that fans of HBD Chick will find familiar from the work of French anthropologist Emmanuel Todd.

The "absolute nuclear family" around the North Sea, where parents look forward to being empty-nesters, appears to map pretty closely to the lands of the Angles, Saxons, and Jutes.

On the other hand, the development of this family structure appears to be post-Beowulf, but pre-Chaucer. British cabinet minister David Willetts wrote in his fine book The Pinch

(as I summarized in my review in VDARE):

"Instead, think of England as being like this for at least 750 years. We live in small families. We buy and sell houses. … Our parents expect us to leave home for paid work …You try to save up some money from your wages so that you can afford to get married. … You can choose your spouse … It takes a long time to build up some savings from your work and find the right person with whom to settle down, so marriage comes quite lately, possibly in your late twenties. ... A small, simple family structure not driven by the need to pass on an inheritance or to sustain ties with brothers and cousins in a clan can be more personal, intense, and emotional—a clue to England's Romantic tradition."

This Anglo-Saxon absolute nuclear family structure is conducive to the highest levels of personal freedom and individualism. But, it requires a lot of land and wealth to expect your sons to be able to afford houses of their own when they find their brides. The Anglo-Saxon nuclear family model where young adults are not under the thumbs of their parents or grandparents or aunt's husband thrives, as Benjamin Franklin pointed out, in underpopulated places with cheap land and high wages, but, as Franklin also noted in the 1750s, it gets undermined by high rates of immigration, which drive up land costs and lower wages. Those who follow the liberty-loving Anglo-Saxon model tend to get outcompeted by groups willing to pile an extended family into one house, as is happening across many of the metropolises of America today.