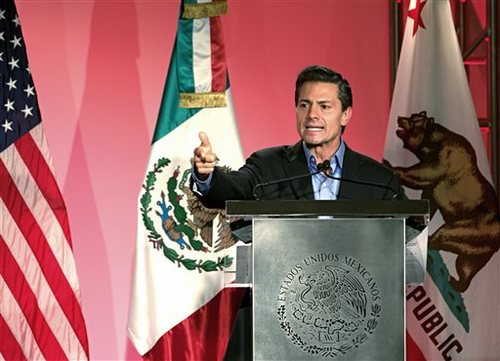 Governor Jerry Brown honored visiting Mexican President Pena Nieto during the latter's visit to California.  The two made some revealing comments about the way they regard the United States.

President Nieto is so hopeless about the prospects of saving his collapsing narcostate that the best solution he can think of is to ship his lumpenproletariat north.

Pena Nieto was welcomed by Gov. Jerry Brown, who played up his immigration credentials in a speech that highlighted the close cultural and historical ties they share across borders.

"It wasn't very long ago that the governor of California was outlawing driver's licenses for people who were undocumented from Mexico," Brown said. "That's not the law anymore."

Brown signed a bill into law last year that will enable immigrants to get driver's licenses next year. He said he got the message after a visit to a Monterey artichoke field where the workers yelled "licencia, licencia."

During an upbeat speech embracing the ties between Mexico and California, Brown didn't entirely gloss over a relationship that has, at times, been fraught with tension and he referred to past ethnic problems.

California voters in 1994 passed Proposition 187 that sought to ban immigrants who are in the country illegally from access to social services including health care and education, though it was reversed by the courts.

Hispanics have now become a force to be reckoned with in California. They now make up the largest of any racial or ethnic group in the state, though their voter registration numbers still lag behind whites.

On Tuesday, Brown will host a luncheon in the president's honor in Sacramento. Pena Nieto will then address the Legislature at the state Capitol.

Pena Nieto criticized unethical governors who had cracked down on immigrants, though he didn't name any specifically.

"There are still states that have not evolved so much as California, that still skimp on recognition and, even worse, the rights of immigrants," he said. "Those who still believe and bet for the exclusion and discrimination or the rejection of diversity ... I only have one thing to say: the future, and a very near future, will demonstrate your ethical mistake. Time will show we're right."

If those who supported Proposition 187 had run ads at the time predicting California's future if the law was thrown it, they would have been condemned as sensationalist, exaggerated, or fantastic.  Yet here we are. Notice two premises of the Narrative the AP is advancing here.

1.  Demographic change is natural, inevitable and irreversible so we better just get used to it.  Actually, it's the predictable result of deliberate state policy.

2. Mass immigration and replacing Americans is held to be in and of itself, a Good Thing — even though it's the predictions of immigration patriots that keep being proven correct by history.

The unintentional punchline from Brown,