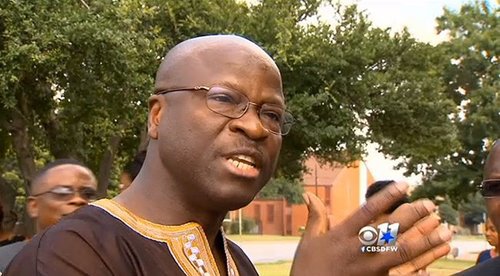 Liberian Stanley Gaye of the Liberian Community Association of Dallas-Fort Worth—despite the lack of a cowboy hat, Mr. Gaye is a “Texas Man”

It’s an ill epidemic, apparently, that blows nobody any good: How the Ebola case gives Rick Perry a second chance to make a first impression, by Chris Cillizza, Washington Post, October 2, 2014. This might be a problem—VDARE.com has pointed out that the Texas governor and possible boob bait presidential candidate is still all hat, no cattle on immigration despite his grandstanding symbolic deployment of the Texas National Guard on the border—but in fact Perry’s comments on Ebola show his fatal trademark combination of big talk, Establishment conventional wisdom and immigration ignorance.

Thus Perry said on Wednesday:“Rest assured that our system is working as it should. Professionals on every level on the chain of command know what to do to minimize this potential risk to the people of Texas and of this country.”

But a day later, it materializes that Possible Ebola contacts now up to 80 [By Bill Hanna, Star-Telegram.com, October 02, 2014] and the New York Times reports: Delay in Dallas Ebola Cleanup as Workers Balk at Task [by Kevin Sack and Marc Santora, Oct. 2, 2014).

Still, with Rick Perry and the Obama Administration on top of things, what could possibly go wrong?

Thomas Eric Duncan, the Liberian individual with Ebola, arrived in the U.S. on September 20th, after having had contact with an Ebola patient in Liberia four days earlier and allegedly lying about it to officials (duh!). [Liberia says Dallas Ebola patient lied on exit documents, by Doug Stanlin, USA Today, October 2, 2014]

So why was Duncan in Dallas anyway? To visit relatives. Did you not know there is a sizable Liberian community in Dallas? The Dallas Morning News [Liberians in Dallas area grapple with Ebola fears, October 1, 2014] even mentions the Mandingo Association of Texas—“an organization that brings together members of the Mandingo tribe from Liberia, Sierra Leone and Guinea.”

Why are we still bringing in people from an epidemic zone—apparently without scrutiny?

I realize we can’t blame Rick Perry for all of this—immigration policy, as we all know, is a Federal prerogative, unless you are a sanctuary city—but of course he completely failed to point out that Ebola is a threat to the U.S. because of lax immigration and refugee policies. And this parallels Perry’s attitude toward our southern border—swagger, talk big, but don’t do what is really necessary.

I’ve personally heard Texas Governor Rick Perry speak twice. I was called up by my Texas National Guard unit to go to Iraq and Perry spoke at our big going-away ceremony. Then on our return, we had a welcome-back ceremony, at which he also spoke. Thanks, Governor Perry!

Superficially, Perry has an appealing style, coming across as a real straight-talking Texas conservative who isn’t afraid to defy Washington. And this certainly ticks off liberals.

But look at Perry’s statement in response to the Oklahoma beheading perpetrated by Alton Nolen.

Rick Perry said on Monday [September 29] that the Obama administration will have to address the beheading of an Oklahoma woman in what the Texas governor noted closely resembled an act of terrorism. “At some point in time, the administration does have to address this as what is appears to many people that it is—and that is an act of violence that is associated with terrorism,” Perry said on Fox News ‘ ‘Fox & Friends.’ Rick Perry: White House must address beheading, by Kendall Breitman, September 29, 2014]

The governor may be scoring points with some fans, but why would anybody suppose that “the administration does have to address this”? In the past six years, the Obama Regime, with the help of a supportive Main Stream Media and the pusillanimous congressional GOP, has done whatever it pleased. It doesn’t have to address anything it doesn’t want to.

And let’s look at something closer to home for Rick Perry, something that he really could do something about—the border with Mexico.

The guardsmen are doing their best—I speak as a veteran of the Texas Guard—but they lack a real mission (although Texas does cheekily plan to bill the federal government for the money it’s spent on the Guard deployment.) [Texas Lt. Gov.: National Guard Troops Still Needed At Border, by Elise Foley, Huffington Post, September 26, 2014]

In August, I proposed a real mission: Texas’ Rick Perry Could Seal The Border Himself—If He Had The Will. Funny thing, it’s been over a month since that article was published, and I have yet to receive a message from the Perry administration, though I would be glad to help run the program.

Helpfully for Perry’s tough-guy image, the Mexican government has been going ballistic over his Guard call-up.

The Mexican Foreign Ministry released a statement condemning the deployment (hypocritically, since its own border is already militarized). When California Governor Jerry Brown visited Mexico, he joined together with Mexican Foreign Minister Jose Antonio Meade to criticize Texas Governor Perry’s announced deployment. Meade proclaimed that “you can never justify the use of public military force”—this from a country that uses its own military to fight drug cartels, carry out road blocks and search vehicles. [Mexico, California officials question Texas border troop plan, AFP, July 28, 2014]

But here’s the point: Governor Perry responded to the Mexican president’s criticism by sending a letter inviting Pena Nieto to visit. It was tellingly reminiscent of the style of his pandering predecessor George W. Bush. It began:

I read with interest and concern your comments regarding border security on the week of September 11, which called Texas’ increased law enforcement presence on the border 'unpleasant' and 'reprehensible.' As neighbors and economic partners, Mexico and the United States are inextricably bound by shared interests and culture. As friends we might not always agree, but we must have an honest and respectful dialogue about the challenges we share, which is why I write to you today.

When will Texas governors learn? They shouldn’t care what the Mexican politicians think! What did Perry gain by going on about “shared interests and culture?” Did he gain more respect in Mexico?

Securing our border depends on us, we can’t rely on Mexico, and we shouldn’t be afraid of their irrational cries of “racism” and “militarization of the border”.

That makes it very hard to take seriously what Perry says about the border.

The historic American nation needs defenders, but it sure doesn’t look like Rick Perry is going to defend us. It’s a shame, since he does have political talent and his platform as Texas governor is a valuable one. Just don’t expect him to use his talent or platform on our behalf.

We have to look elsewhere.