The evil machination of the House Republican leadership to create a thinly disguised amnesty for millions has not gone unnoticed by American sovereignty’s great defender, Senator Jeff Sessions. He warned speaker Boehner & co. in a recent press release that legalization plus increased legal immigration would be very harmful for working Americans.

Why do Republicans want to help Obama when his policies are hugely unpopular? 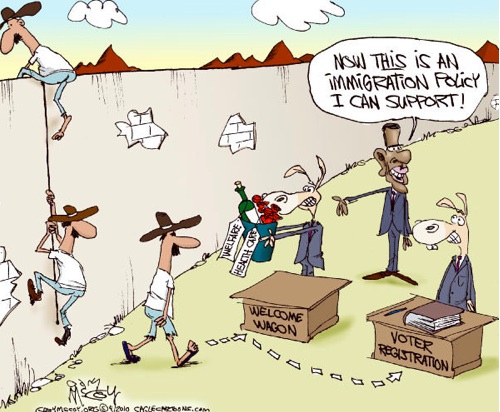 You can read the detailed memo Senator Sessions sent to his House colleagues on the occasion of their conference this week: IMMIGRATION AND THE GOP AGENDA

“Once again, we have the same recycled talking points—crafted, it would appear, with the help of the same consultants and special interests. Each time, the talking points are followed by legislation that fails to match the promises—legislation that, at bottom, ensures only the amnesty and not the enforcement. The leadership talking points look like an attempted repackaging of the tired Gang-of-Eight-style formula that has been proposed, rejected, and re-proposed for years. It is no surprise then that Senator Schumer and former Speaker Pelosi are so encouraged by these developments. But while Democrat leaders and interest groups appear satisfied, this document was not voted upon by the GOP conference and clearly does not represent the consensus of Republican members. Is it not time we pushed aside the stale proposals stitched together in concert with the same lobbyists, and asked what is in the best interests of the hardworking American citizen—and the nation?

In three fundamental respects, the House leaders’ emerging immigration proposal appears to resemble the Senate plan: it provides the initial grant of amnesty before enforcement; it would surge the already unprecedented level of legal lesser-skilled immigration to the U.S. that is reducing wages and increasing unemployment; and it would offer eventual citizenship to a large number of illegal immigrants and visa overstays.

Rank-and-file House Republicans are the last line of defense for working Americans. Now is the time for rank-and-file House Republicans to claim the leadership mantle and to say, firmly: our goal is to transition millions of struggling Americans from welfare and joblessness to work and rising wages. The President has not only dismantled enforcement but has delivered for a small group of special interests and CEOs by forcing through the Senate legislation that drastically surges the future flow of new immigrant workers competing against unemployed Americans. There is a reason why these increases are never mentioned in the slick TV ads and radio spots: the American people reject them. Americans earning under $30,000 prefer a reduction to an increase in current record immigration levels by a 3-1 margin. Republicans have the chance to be the one party giving voice to the real-world concerns of the everyday worker whose wages have been flat or falling for more than 10 years.

House leaders should support—not ignore—the immigration officers pleading for help. They should stand with—not against—unemployed American workers. And they should expose—not join—the President’s campaign to pass an immigration plan that will hollow out our shrinking middle class.”