I write from Mexico, where my family and I are on our summer visit. The Orlando shooting has been widely reported here. The Mexican Main Stream Media (MMSM?) is working real hard to make the shooting a Latino, and even specifically Mexican, issue. It’s an example of Mexico’s profound selfishness—and of why America should ignore anything it says, above all on immigration.

Mexico’s Excelsior newspaper/website has a section Masacre en Orlando (“Massacre in Orlando”) where its many articles on the topic are archived. That means the story is approached from several different angles.

This being the MMSM, however, these different angles have to fit in with a generally Leftist, pro-Obama and pro-gay agenda.

Gun control, for example. Why is it so easy to get guns in the United States? This is a perennial topic in the MMSM.

After all, Mexico’s stricter gun laws have been so successful in stopping gun violence here, right?

Anyway, since gun control is the default position, the sections contains articles with such titles as Es muy fácil comprar un arma en Estados Unidos (“It’s very easy to buy a weapon in the United States”), Oprah Winfrey cuestiona la venta de armas de asalto (“Oprah Winfrey questions the sale of assault weapons”), and Republicanos en el Senado finalmente votarán sobre control de armas (“Republicans in the Senate finally will vote on control of weapons”). Then there’s this article about UN criticism of U.S. gun laws which also says Mexican and Central American gun laws are too permissive. ["¿Cómo es posible que cualquiera pueda obtener un rifle?, tunde la ONU a EU"  (“How is it possible that anyone can get a rifle ? says the UN to the US”)]

Other Excelsior articles report about the wonderful things Obama is doing to help. Obama is well-thought of in Mexico and reported in a very positive fashion.

Four Mexicans died in the Orlando shooting. [Ellos eran los cuatro mexicanos muertos en bar gay de Orlando, Excelsior, June 17, 2016] The Mexican consulate in Orlando reported that one was an illegal alien. Mexican President Enrique Pena Nieto promised to help their families, declaring “words that sow hate, that are discriminatory, only provoke eventually violence”. And he claimed that the Orlando shooting may have had its origin in “expressions of hate, of discrimination, of a phobia against certain persons and the only thing that it brought about was to generate violence….” [Matanza en EU toca a mexicanos; garantizan apoyo federal a familiares, By  Enrique Sánchez and  Iván E. Saldaña June 14, 2016]

I didn’t notice Pena Nieto say anything about Islam.

His is the sort of analysis that lumps together opposition against gay marriage and shooting a hundred people as “homophobia.” And, in fact, the Mexican President is now facing unexpected opposition to his attempt to enshrine same-sex marriage in the Mexican constitution (see my Same-Sex Marriage in Mexico may be Added to the Constitution, Mexidata, May 23, 2016). Just the other day, Pena Nieto’s Interior Minister Osorio Chong (right)  warned Catholic clergy not to “incite hate” by opposing same-sex marriage.

Then there’s the “Anti-Latino” angle. The fact that most of the Orlando victims were Latinos—most of them in fact Puerto Ricans [ In the Dead in Orlando, Puerto Ricans Hear a Roll Call of Their Kin, by Lizette Alvarez And Nick Madigan, New York Times, June 14, 2016]—was initially underplayed by the U.S. Main Stream Media, obsessed as usual with the LGBT angle.

The murder of 50 persons in Pulse, three of them Mexicans [later found to be four] in the LGBT club in Orlando, Florida, was it a hate crime, influenced by anti-Latino or Anti-Mexican sentiments?

That’s quite a claim—another example of how perceived victimization is the way to gain status in today’s world.

Alejandro claims that, as of the afternoon of the 13th, 77% of the dead were of “Hispanic origin”. So he asks, did Omar Mateen “have some form of dislike or resentment toward Latin Americans?”

Alejandro presents as a key piece of evidence that, according to Spain’s El País, a witness to the massacre named Maribel Mejia said that that “…98% of the nearly 300 persons who were in the Pulse during the shooting were Latinos.”

That might be true, although you can’t always tell. After all, “Latinos” don’t really constitute a race.

But if it is true, then the percentage of Latinos killed (77%) was lower than the percentage in the club (nearly 98%) which would seem to disprove this theory. But Alejandro presents it as a key piece of evidence!

Alejandro says that the club is really a “Latin Club”, and photographs indicate that “African-Americans and Caucasians” tend to be a minority every night, and there are even fewer during a “Latin Night” as was the night of the massacre.

Alejandro points out that there are 41 LGBT nightspots in Orlando, so why did Mateen choose this one?

On the other hand, the club was located in Wadeview Park, 88% Anglo.

Mateen, Alejandro tells us, quoting the Daily Beast, lived in “an area with many Hispanic immigrants…but not a big community of Muslims or persons from the Middle East.”

People who knew Mateen have described him as  violent, unstable and abusive.  But Alejandro says that “there are no articles that mentioned xenophobic, anti-Latino or anti-Mexican sentiments.” It sounds as though Alejandro is disappointed.  He laments of Mateen: “There is hatred and racism, but xenophobia has not been reported in more than 15 articles analyzed by Excelsior.”

But there’s surely something there, right? Alejandro reported that in Orlando there are “78,000 persons of Mexican origin, 44,000 born in the United States and 34,000 born in Mexico.” A quarter of Orlando’s population is some kind of Hispanic (half Puerto Rican, about a seventh Mexicans, with smaller amounts of Cubans, Colombians and Dominicans).

Alejandro reports that the attack was condemned by

“Casa Aztlan, LULAC, National Council of La Raza, and other clubs and federations of Mexican immigrants. “ 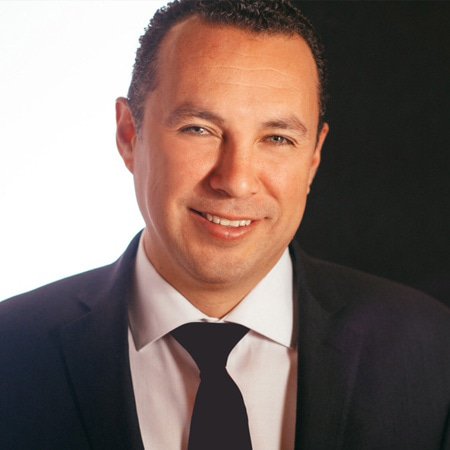 In fact, Hector Sanchez (right)  head of NHLA (the National Hispanic Leadership Agenda) proclaimed that “The worst of the suffering fell on the LGBTQ Latinos”.

But don’t worry, Excelsior has plowed this ground before, and apparently without irony. Thus Julio Alejandro writes that

Excelsior has published on previous occasions how Anglo-Saxon media and journalists diminish the importance, history and culture of the Mexican and Latino communities in massacres and violent episodes.

What? Well, here’s an example.

In the last big American shootout, the murder of 14 persons in the city-county of San Bernardino, California, carried out by another Muslim, Excélsior was the only media outlet that reported that this is the “county with the greatest number of Mexicans in all the United States … where approximately 42% of its 2,112,619 inhabitants are of Mexican origin” and emphasized it, contextualizing the consequences that the immigrant community had.

(In fact, while 42 percent of San Bernardino’s population is of Mexican origin, only 21 percent of the dead—three out of fourteen—had Latino names. [San Bernardino shooting victims: Who they were, LA Times, December 17, 2015])

So Julio Alejandro, in Excelsior, a major Mexican newspaper, has made the Orlando shooting a story principally about the sufferings of Mexicans—as the paper had done previously about the San Bernardino shooting.

Mexicans are good at this. That’s why, if they hear about Donald Trump, or anybody in the U.S., who wants to control our border or protect our people, then by the time it gets to the MMSM, it becomes a story about Mexicans and how they suffer.

That’s why Julio Alejandro, studiously ignoring any Islamic motive for the shooting, goes on and on looking for a way to prove it was an anti-Latino massacre.

Although we’re told that it’s wrong to politicize a massacre—unless, of course, it offers a chance to demonize Southern whites—it’s really impossible in this case not to. As Trump has pointed out, had Mateen’s parents not been brought into this country, this particular massacre would not have taken place.

So how about learning from this massacre what we need to do to protect the American nation?