Mexico’s beautiful west coast city of Acapulco used to be a safe and pleasant place for Americans to vacation. In fact, Hollywood produced a film in 1963 titled “Fun in Acapulco” starring Elvis Presley that was practically a travel ad.

But in recent years, tourists have been avoiding Acapulco because of worsening cartel violence. On Sunday night, gunmen attacked a police station in the city — is that crime or civil war?

In addition, a local journalist, Francisco Pacheco Beltran, who reported on cartel violence, was murdered a few days ago. According to Reporters without Borders, Mexico is the deadliest country in the Western Hemisphere for journalists. 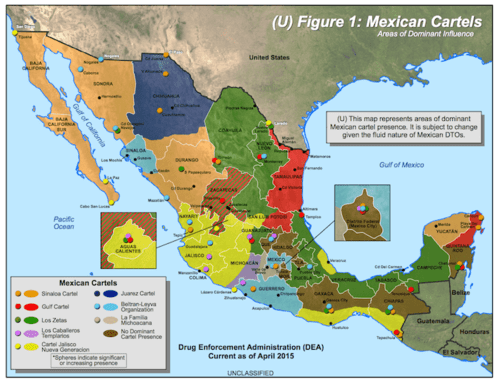 The map of Mexico’s drug cartels is a patchwork of crime.

The Pacific city of Acapulco remained gripped by fear Tuesday with thousands of businesses and many schools shuttered following two brazen attacks on federal authorities — the latest round of bloodshed in the city’s long fall from storied vacation paradise to Mexico’s murder capital.

Gov. Hector Astudillo of Guerrero state pleaded for a return to “normalcy” after Sunday night’s attacks by suspected drug gangs on a police station and a hotel that housed federal police.

The attacks were apparently reprisals for the arrest Saturday of Fredy del Valle, alias “El Burro,” head of the Independent Cartel of Acapulco, the governor said.

Though the casualties were limited to one dead attacker and a wounded policeman, prolonged gunfire transformed several blocks into a war zone and left residents in a state of shock. City streets, including the Costera Miguel Aleman beach side road, were largely deserted Tuesday amid fears that violence could erupt again.

“Today we haven’t had any business,” Esmeralda Rios, a 23-year-old waitress at El Fogon restaurant, said Tuesday. “The few tourists who have stayed don’t want to leave their hotels.”

The decline of Acapulco, with a population of roughly 800,000, been underway for at least a decade as the city, its port and Guerrero state have taken on increasing strategic importance as way stations for South American cocaine destined for the United States.

With 903 murders last year, more than any other Mexican city, Acapulco had 111 killings for every 100,000 people. That is more than double the rate in the deadliest U.S. city — St. Louis — in 2014, the most recent year for which the federal government has published statistics.

The violence stands in sharp contrast to a reputation forged more than a half-century ago, when the city was a playground for international film stars including Brigitte Bardot, Elizabeth Taylor, Errol Flynn and John Wayne. Its glamour was the backdrop for “Fun in Acapulco,” a 1963 movie starring Elvis Presley.

The attention helped establish Acapulco as a top destination for American tourists — including honeymooners Bill and Hillary Clinton in 1975 — drawn for decades by the mild climate, white sand beaches and marlin fishing.

Those days are over. As the violence increased, U.S. tourists spurned Acapulco in favor of newer, safer resort cities such as Ixtapa, Cancun and Cabo San Lucas.

While tourism declined and job opportunities diminished, the drug gangs grew in stature as more young people turned to them for employment.

Traffickers have enjoyed near impunity as they have infiltrated the state government, said Samuel Gonzalez, a lawyer and organized crime expert based in Mexico City.

The violence “has kept the state in constant crisis,” he said.

The bloodshed intensified in 2009 after police killed Arturo Beltran Leyva, a kingpin who controlled the drug trade throughout the state. His death set off a power struggle among splinter groups that continue to battle among themselves and with police.

“The gangs used to leave Acapulco in relative peace,” said John Bailey, a Georgetown University professor emeritus who specializes in organized crime. “But the local drug market, plus the trafficking routes through the port, plus ongoing feuds, have brought gang violence into the city.”

The attacks Sunday were directed by traffickers, authorities said.

Arriving in three SUVs, heavily armed gang members descended on the Alba Suites Hotel, where federal police were living. Gunfire echoed through the city for 20 minutes as people strolling along the beachfront roadway ran for cover and restaurant customers hid under their tables, according to local accounts.

Ten minutes later, gunmen attacked a federal police station in the middle of the tourist zone. Although dozens of shots were fired, no casualties were reported in that attack.

On Tuesday, 3,800 businesses in the city remained closed, according to the Guerrero Federation of Chambers of Commerce. They will stay that way until the government restores order, said Alejandro Martinez Sidney, the group’s president and owner of a restaurant in the city.

“We hope this suspension brings action from [Mexico’s] President Enrique Peña Nieto so that we can return to work,” he said.

Many business owners accuse the government of abandoning them to the mercy of drug traffickers.

The hotel occupancy rate in Acapulco during this month’s holy week — one of the busiest tourist seasons of the year — was 76%, down from 97% last year, the hotel owners association said Tuesday. Since the attacks this weekend, cancellations have been mounting, with only 20% of rooms now occupied.

Laura Caballero Rodriguez, president of the Acapulco Store Owners Assn., said that about 350 stores have closed this year and that many of those still open are struggling to pay their employees.

“The violence in Acapulco is terrible, a situation we can’t tolerate any more,” she said.