Melissa Harris-Perry Needs a Trip to Hard Work U

MSNBC's Melissa Harris-Perry is the cable TV pioneer who broke the tastelessness barrier for feminists by wearing tampons as earrings on air in 2013. This week, she made ignominious history again—as the race-baiting fool in an ivory tower bubble who believes the words "hard worker" are a slur against black slaves and moms who don't have health care.

Caution: You may need a double dose of Excedrin to protect yourself from her brain-splitting nonsense.

Earlier this week, Harris-Perry chastised a Latino Republican guest on her show to be "super careful" when using the phrase "hard worker" to describe white Republican Rep. Paul Ryan, R-Wisc., the newly elected House GOP Speaker. Why? "Because I actually keep an image of folks working in cotton fields on my office wall," she bragged, "because it is a reminder about what hard work looks like."

Harris-Perry [Email her] an upper-crust Wake Forest University professor whose parents were both college officials, babbled on in the parlance of tortured political correctness that a white male Republican can only be a "hard worker" in the "context of relative privilege."

Only in academia is the color-coding of one's work ethic seen as the apex of progressive enlightenment.

But wait. One's diligence is gender-weighted, too! Harris-Perry bloviated that "hard worker" is doubly offensive because of the imaginary plight of unnamed "moms who don't have health care who are working," but whom unnamed mean white Republican males call "failures."

Because of racism and sexism and patriarchal hegemony. Or something.

Harris-Perry should get off her bigoted high horse and get educated about how real people in the real world value, encourage, and live the principles of hard work. It has nothing to do with color lines and everything to do with character.

This truth was driven home for me during a recent trip to College of the Ozarks, proudly known as Hard Work U. The school, based near Branson, Missouri, is located in one of the most historically impoverished regions of the country. According to the college, founder and Presbyterian missionary James Forsyth found inspiration in a young boy named Benjy Cummings. Forsyth met the fourth-grader while he hunted squirrels for food. Benjy told the missionary that he was forced to drop out of school because his family could not afford to send him to Springfield to get an education.

The private, Christian, four-year College of the Ozarks was established for economically disadvantaged students; 90 percent of enrollees must demonstrate financial need. All students are required to work 15 hours a week for a campus group or institution, ranging from admissions and agriculture, to the feed mill and fruitcake and jelly kitchen, to the health clinic, hotel, weaving department, power plant and water treatment plant.

The work helps offset the entire cost of tuition and graduates leave virtually debt-free. President Jerry Davis, himself a remarkable American success story who rose from poverty in Appalachia, proudly notes that the college "carries no institutional debt" and codifies debt avoidance into the character education of the student body.

"White privilege?" That's a cynical construct of liberal egghead elites who depend on false narratives to stoke grievances and cable TV controversy. 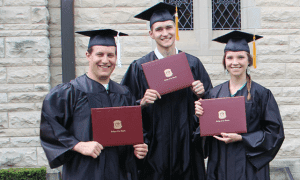 While I was at College of the Ozarks, I saw American kids (pictured right) doing the jobs that open-borders zealots and left-wing ideologues claim they never do: mowing lawns, making beds, sweeping floors and washing dishes. I heard many stories of students who were the first in their families to attend college and who embraced hard work as a matter of duty, faith and patriotism.

Unlike Ms. Harris Hyphen Perry, it never once occurred to me to rank the industriousness of the hard-working young people around me by their race.

Sweat, after all, is colorblind.