I was sorry to read of the death of Maria “Masha” Sergeyevna Rumyantseva, 18, in Yellowstone Park last Thursday. The Russian woman apparently was on a rock ledge that gave way, and she fell 400 feet down the canyon. She was exploring on her first day in the park, where she had come to work for a concession company. It’s unclear whether she was too far out on a dangerous spot, or was just unlucky with geology. Either way, the accident was a tragic end for a young person just starting out in life. 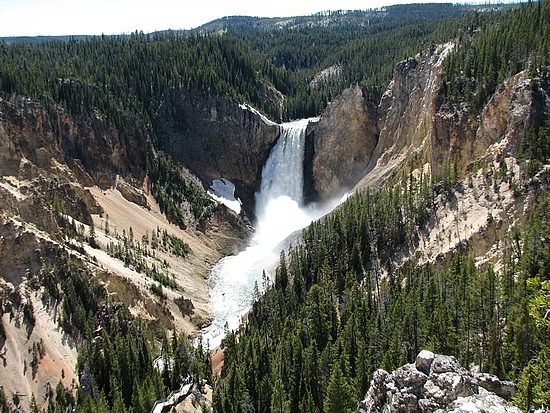 Sad as the death was, the presence of Ms Rumyantseva as an employee in Yellowstone Park was also a reminder that Washington continues to admit 100,000 foreign college students annually as temporary workers to experience American culture. The J-1 visa program is supposed to promote world peace and diversity kumbaya by using a hands-across-the-sea approach to diplomacy.

Yellowstone’s summer jobs program sounds terrific, with low wages but cheap living costs, in a place that would appeal to many American teens who love the outdoors.

The J-1 might be a harmless bit of do-goodery in ordinary times, but during the current brutal recession, the government should not be doling out scarce jobs to foreigners when American youngsters now face what one economist calls a “labor market depression for teens.”

Hey, Washington, how about a time-out on J-1 visas until the economy improves a bit?? Assuming it does.

WASHINGTON – Once a rite of passage to adulthood, summer jobs for teens are disappearing.

Fewer than three in 10 American teenagers now hold jobs such as running cash registers, mowing lawns or busing restaurant tables from June to August. The decline has been particularly sharp since 2000, with employment for 16-to-19-year olds falling to the lowest level since World War II.

And teen employment may never return to pre-recession levels, suggests a projection by the U.S. Bureau of Labor Statistics.

The drop in teen employment, steeper than for other age groups, is partly a cultural shift. More youths are spending summer months in school, at music or learning camps or in other activities geared for college. But the decline is especially troubling for teens for whom college may be out of reach, leaving them increasingly idle and with few options to earn wages and job experience.

Older workers, immigrants and debt-laden college graduates are taking away lower-skill work as they struggle to find their own jobs in the weak economy. Upper-income white teens are three times as likely to have summer jobs as poor black teens, sometimes capitalizing on their parents’ social networks for help.

Overall, more than 44% of teens who want summer jobs don’t get them or work fewer hours than they prefer.

“It’s really frustrating,” said Colleen Knaggs, describing her fruitless efforts to find work for the past two years. The 18-year-old graduated from high school last week in Flagstaff, Ariz., the state that ranks highest in the share of U.S. teens who are unable to get the summer work they desire, at 58%.

Wanting to be better prepared to live on her own and to save for college, Knaggs says she submitted a dozen applications for summer cashier positions. She was turned down for what she believes was her lack of connections and work experience. Instead of working this summer, she’ll now be babysitting her 10-year-old brother, which has been the extent of her work so far, aside from volunteering at concession stands.

“I feel like sometimes they don’t want to go through the training,” said Knaggs, who is now bracing for a heavier debt load when she attends college in the fall.

Economists say teens who aren’t getting jobs are often those who could use them the most. Many are not moving on to more education.

“I have big concerns about this generation of young people,” said Harry Holzer, labor economist and public policy professor at Georgetown University. He said the income gap between rich and poor is exacerbated when lower-income youths who are less likely to enroll in college are unable to get skills and training.

“For young high school graduates or dropouts, their early work experience is more closely tied to their success in the labor market,” he said.

“We are truly in a labor market depression for teens,” he said. “More than others, teens are frequently off the radar screens of the nation’s and states’ economic policymakers.”

Washington, D.C., was the jurisdiction most likely to have teens wanting summer work but unable to get it or working fewer hours than desired, with more than three in five in that situation. It was followed by Arizona, California, Washington state, Florida, Tennessee, North Carolina and Nevada.

On the other end of the scale, Wyoming, North Dakota, Oklahoma, Nebraska, South Dakota and Kansas had teens who were more often able to find work. All those states have fewer immigrant workers.

The figures are based on an analysis of Census Bureau Current Population Survey data from June to August 2011 by Northeastern’s Center for Labor Market Studies. They are supplemented with research from Christopher L. Smith and Daniel Aaronson, two Federal Reserve economists, as well as interviews with Labor Department economists and Challenger, Gray & Christmas, a national job placement firm.

About 5.1 million, or just 29.6%, of 16-to-19 year olds were employed last summer. Adjusted for seasonal factors, the rate dips to 25.7%. In 1978, the share reached a peak of nearly 60% before waves of immigration brought in new low-skill workers. Teen employment remained generally above 50% until 2001, dropping sharply to fresh lows after each of the past two recessions.

Out of more than 3.5 million underutilized teens who languished in the job market last summer, 1.7 million were unemployed, nearly 700,000 worked fewer hours than desired and 1.1 million wanted jobs but had given up looking. That 3.5 million represented a teen underutilization rate of 44%, up from roughly 25% in 2000.

By race and income, blacks, Hispanics and teens in lower-income families were least likely to be employed in summer jobs. The figure was 14% for African-American teens when their family income was less than $40,000 a year, compared to 44% of white teens with family income of $100,000-$150,000. Hispanics in families making less than $40,000 also faced difficulties (19% employed), while middle-class black teens with family income of $75,000-$100,000 did moderately better, at 28% employed.

Based on teen employment from January to April this year, also at historic lows, the share of teens working in jobs this summer is expected to show little if any improvement.

“We’re seeing a cultural change. Parents used to tell their kids, go to the retail store or gas station and find a job in the summer, but it’s not happening as much anymore,” said John A. Challenger, CEO of Challenger, Gray & Christmas. He urges teens who desire jobs to find them by asking parents’ friends and meeting hiring mangers face to face, rather than simply e-mailing or dropping off resumes.

“The question is where teen employment has bottomed out. Have we reached that limit? I don’t know,” he said.

According to government projections, the teens entering the U.S. labor force are expected to decline another 8 percentage points by 2020. By that time, young adults ages 16 to 24 will make up 11% of the labor force. While increased schooling is a factor, much of the recent employment decline is due to increased competition from other age groups for entry-level jobs that teens normally would fill.

Smith, the Fed economist, attributes at least half of declining teen employment since the mid-1980s to youths who are being crowded out of the job market by older workers and immigrants, pointing to recent technological changes that have thinned the ranks of midlevel jobs such as bank teller and sales representative.

His working paper for the Federal Reserve points to “potentially troubling long-term consequences” to the extent that jobless teens are not utilizing their time to go to summer school or do other college-preparatory work. His analysis of government data found that jobless teens across all income groups were often spending the extra time watching TV, playing video games and sleeping rather than on educational activities.

Nicole Shaw, 18, of Baton Rouge, La., is working to make sure she isn’t a victim of the jobs pinch. She was hired as a restaurant waitress after a family friend tipped her off about an opening earlier in the year. In a state where teen employment is 10th worst in the nation, Shaw has become the youngest employee in her workplace by several decades while her friends continue to struggle to find summer work.

Still, she gets paid just $2 an hour plus tips, making it hard to accumulate real savings.

“I’m mostly just trying to help out my family and save for college,” Shaw said, expressing hope that she will be able to build on the work experience for the future. “Even though you can be the best waitress you can be, the tips, they tip you whatever. I love my job, it’s just the pay.”