John Derbyshire: The Moral Case For Trump—He Made His Money In Business, Biden Made His In Politics

That President Trump will lose his re-election bid is a common opinion among people who wish otherwise. It’s not just me. I got an email from an old friend who is nine times smarter than I am, and a Trump voter.

On the side of the Democrats are: The FBI, the CIA, the federal bureaucracy, academia, Facebook, Twitter, Google, Hollywood, NBC, CBS, ABC, CNN, NPR, the NYT, every magazine on the shelf, BLM, Antifa, 50 million illegal aliens, and now, the Chinese Communist Party.

If they can't steal an election with that group of supporters, what does it say about their general level of competence?

So Trump has an uphill battle—but he also has poor mountaineering skills. That’s what mainly got my attention in Thursday night's Trump-Biden debate

Some of this has already been elaborated by my VDARE.com colleague James Kirkpatrick here..

The number is likely closer to twenty million; and with chain migration following, that twenty million would bring in another forty, fifty, a hundred million. Why didn't Trump say that?

Biden mocked Trump for having said, twenty years ago, "There's not enough people in jail."

What Trump said in his book The America We Deserve (2000) referencing James Q. Wilson's work, was  “No, the problem isn’t that we have too many people locked up. It’s that we don’t have enough criminals locked up.”

Trump was right; and I think a great many voters, most of them Trump voters, know that.

Trump did, to be sure, remind us that the Obama Administration did this too.

He could, however, kill the whole thing dead by asking the lefty moderator what she thinks should be done with children brought across the border illegally by their parents. Put them into adult jails with the parents? Just release parents and kids together into the population with a stern reminder to the parents to show up for their court hearing two years on?

What would you do, lady?

The U.S.A., as every foreigner notices, is an intensely moralistic nation. If you can make any kind of appeal from personal morality, that's a big plus.

Trump can—but he doesn't, I don't know why.

This is the case: these two guys on the debate stage, Trump and Biden, are both stinking rich. How did they get that way, though?

It's not a mystery in either case. Trump got a head start from his Dad, a successful businessman. However, he did not do the Prodigal Son thing and waste his substance with riotous living; he learned the commercial real-estate business and parlayed his Dad's gift into a huge fortune, creating hotels, resorts, golf courses, and such, for the convenience and enjoyment of his fellow citizens. Then he ventured into show business, and was successful there. Trump's fortune has been honestly earned.

Then, at a point in life where many of us get a good pair of carpet slippers and relax by the fire to read Trollope and bore our grandchildren, Trump transferred his energies to public service, offering himself to voters as a guy who could fix things that many of us thought were wrong with our country.

That's Trump. Now, how did Joe Biden get rich?

From politics, that's how. He's been in politics for fifty years, well-nigh his entire adult life.

Politics doesn't actually pay that well, salary-wise. A conscientious politician, in the older Anglo-Saxon tradition of public service, will live decently well, but he won't get stinking rich. I gave a couple of examples in my book We Are Doomed:

When Harry Truman left office in 1953, he had no income but his army pension of $112.56 a month. He had to take out a bank loan while negotiating a deal to write his memoirs. That was the way of things all over the Anglosphere. It was part of the tradition of modest Anglo-Saxon government. When Bob Menzies, Australia's longest-serving Prime Minister, left office in 1966 after 18 years in power, having given up a lucrative legal career for politics, he could not afford to buy a house in Melbourne.

Well, that was then, when notions of gentlemanly restraint and duty were still current. Ours is a cruder, coarser, more cynical age.

Gentlemanly restraint nowadays would be hooted down as "toxic masculinity." A President who left office with nothing but an army pension to fall back on—and who, like Truman, would not accept offers of extravagant speaking fees or company directorships because it would demean the Presidency—would nowadays be regarded as a sucker.

So if Joe Biden didn't get rich on his politician's salary, how did he get rich? We've been getting some insights into that from these recent revelations about his hobnobbing with Russian and Chinese kleptocrats.

Forbes has the details of Biden's post-Vice Presidential income growth: 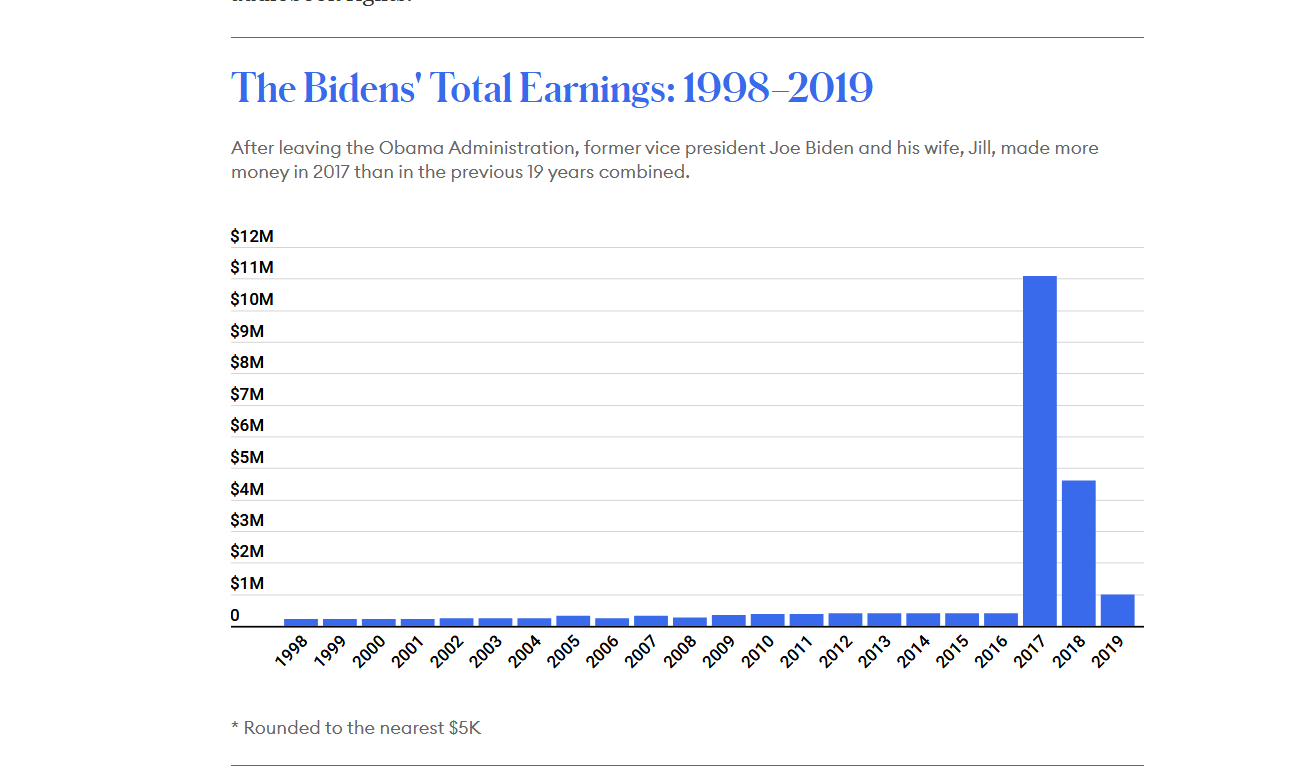 How The Bidens Earned $16.7 Million After Leaving The White House,  by Michela Tindera, October 22, 2020

So comparing these two guys, there is a strong moral case in favor of Trump.

Why doesn't he make it? Poor mountaineering skills.