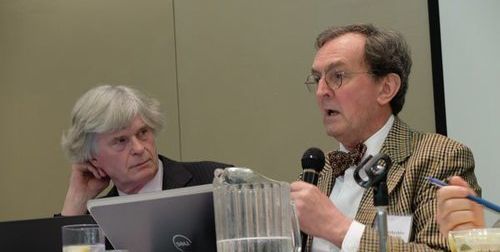 John Derbyshire: The American Political System CAN Solve The Race Problem—For A Given Meaning Of “Solve”

Last weekend Peter Brimelow and I attended the annual American Renaissance conference in Tennessee. Peter gave a feature speech on Saturday morning, title “Immigration: Is This the Breaking Point?”

Then on Saturday afternoon Peter and I formed the affirmative side in a debate on the question: “Can the American political system solve the race problem?” 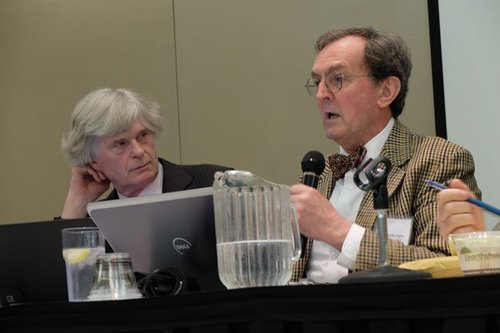 Arguing against us, i.e. that our political system can’t solve the race problem, were Richard Spencer, fresh from his spell in a Budapest jail, and long-time American Renaissance stalwart Sam Dickson.

Jared Taylor, proprietor of American Renaissance and organizer of the conference, gave us guidance to prevent the debate wandering off into unproductive areas.

“Solve the race problem,” Jared told us, was defined to mean, for the purposes of the debate, (a) attain general public recognition of race differences in intelligence and temperament, and (b) bring about the repeal of enough anti-discrimination laws to restore true freedom of association.

At the end a vote was taken to see how many minds had been changed. Not many, was the answer; but Peter and I changed slightly more than Richard and Sam, so victory was ours.

Here is my five-minute presentation. Actually, here are the prompt notes I prepared beforehand. They were too long (1,000 words) for five minutes’ speech (600 words), so I skipped and abbreviated some parts when speaking. I’ve also tidied up for reading and corrected a factual error or two.

The debate was recorded on video and I assume will be issued by American Renaissance soon on RenAudVis.com (video, audio, or DVD by mail.)

I am going to begin with a little lawyering on the title of the debate.

The first word is “can.” I shall argue that, yes, the political system can solve the race problem. I shall raise several reasons to believe it can. Whether it will or not, or the probability of its actually doing so, I leave to your judgment.

And then the sixth word: “solve.” What does it mean to “solve” the race problem? Fortunately Jared has given us some guidance here. For the purposes of this debate, a solution will consist of, first, attaining general public recognition of race differences in intelligence and temperament, and second, the repeal of enough anti-discrimination laws to restore true freedom of association, so that explicitly white—and explicitly black, explicitly Asian, explicitly Comanche, explicitly anything—groups and communities can be formed.

I’m going to assume that the second thing, the restoration of freedom of association, will follow from the first. Here then are a few rays of hope for race realism—some reasons for thinking that general public recognition of race differences in intelligence and temperament can come about within our current political system.

There are six rays of hope here altogether; although the third is a two-parter, so perhaps the total is seven.

Homosexual marriage didn’t go from being a joke to being conventional wisdom because politicians willed it so. The politicians tagged along behind media and show business elites, who in turn were capitalizing on changes of sensibility in the broad upper-middle classes.

2. Nothing grows to the sky. Public attitudes ebb and flow; the pendulum swings. The English puritans banned Christmas and hanged adulterers; twenty years later came the license and gaiety of the Restoration. A century and a half later, Regency dissipation gave way to Victorian primness.

How much further can we go in the direction of reality-denial and ethnomasochism? The nation has twice voted for Barack Obama as President: an affirmative-action hire whose previous executive experience was running a playgroup in Chicago. What next—President Dwayne Elizondo Mountain Dew Herbert Camacho?

3. Redressing the balance … George Canning was a 19th-century British Foreign Secretary who encouraged Spain’s South American colonies to seek independence. Canning, as every English schoolboy used to know, boasted that he had called the New World into existence to redress the balance of the Old.

Race realism may come to an acceptance by a reverse process: the Old World redressing the balance of the New.

Whether the redressing will come from the West or the East of the Old World is an interesting question. I’ll take the possibilities in turn.

3a. … From the West. At the Western end of Eurasia, the Euro end, as we know, and as the presence of our European friends here today happily reminds us, resistance to the multiculturalist project has already taken the form of functioning political parties.

Once opposition to multiculturalism has broken through the respectability barrier, can race realism be far behind?

3b. … From the East. At the other end of the Eurasian landmass, the Asian end, is the rising power of China, a monoracial nation immune to American-style ethnomasochism.

The rise of a competitor superpower with frankly race-realist attitudes can only make the equalist fantasy harder to maintain.

4.Not Good for the Jews. I don’t think it’s controversial to say that in bringing about big cultural changes in our country, Jewish elites in the media, arts, show business, and the intelligentsia have immensely disproportionate influence.

For complex historical and cultural reasons written up by Kevin MacDonald and others, American Jews have been energetic proponents of multiculturalism and white race guilt.

Recently, however, the mass immigration of anti-Semitic Muslims into European countries has convinced many European Jews that multiculturalism may have reached the point of diminishing returns—may no longer be “Good for the Jews.”

American Jewry is some way behind here, but a couple more Charlie Hebdo-style Islamist atrocities may swing them round.

There has always, in any case, been a serious cognitive dissonance between the intense nationalism of Israel and the multicultural transnationalism of most American Jews.

When arguing for immigration restriction against a Jewish open-borders advocate, it has for years been a standard rhetorical ploy to ask: “Can we try out open borders in Israel first?”

Mass Muslim immigration can only make this cognitive dissidence worse. Multiculturalism is not Good for the Jews.

Next up: Designer babies by embryo selection. We can already do some of this. As we get better acquainted with the genome, we shall be able to do much more.

Can the Standard Social Science Model, with its insistence that race is a social construct, survive when fine points of genomic difference are everyday topics of conversation?

6. Breakup of the 2-party system. When I was growing up in England in the 1950s and 1960s there were two parties, Labour and Tory. Things had been that way since the collapse of the Liberal Party after WW1.

At the pre-election televised debate over there earlier this month there were seven party leaders on the stage.

Two-party politics may be just a legacy from the industrial age. It’s not cast in stone. If the duopoly is broken, there is more political space for viewpoints out of the mainstream, and more general willingness to engage with them.

Thank you, ladies and gentlemen.