I wrote the definitive takedown of the State of The Union, which I called "this Stalinesque extravaganza" ten years ago in We Are Doomed. Why don't they listen?

I noted how disgracefully inappropriate this spectacle is to a commercial republic. I pointed out that for most of our history there was no speech, only an "annual message" delivered to Congress in writing. That was done as late as Richard Nixon's fourth State of the Union in 1973. It's a sensible and honorable tradition, to which we should revert.

Plainly we're not going to, certainly not under this president. And I'm bound to say, much as I deplore the whole preposterous, un-republican performance, if we must have the damn fool disgusting thing acted out like this, President Trump did it very well.

His strategy is clearly to position his party as the party of Americans, while the Democratic opposition is the party of foreign scofflaws and unpatriotic, disgruntled minorities. 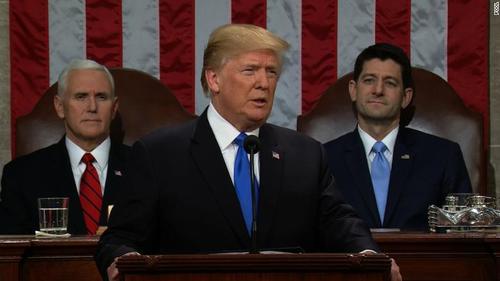 This isn't quite congruent with reality, of course. Quite a lot of Congressional Republicans don't give a hoot for Americans and will move heaven, earth, and the Constitution to appease foreign scofflaws, and the party donors who profit from their cheap labor. One such was sitting right behind the President on Tuesday: Paul Ryan. (Uncharitable souls might want to amend that to "at least one such …" but I'm going to be nice to the Veep here).

Conversely, there are probably still a few patriots in the Democratic Party, if you look hard enough. Jim Webb was still a Democrat last time I checked, although not alas in Congress. Certainly among Democrat voters there are many who still quaintly regard the Democrats as the party of the little guy, while Republicans represent the heartless rich. I know some of those innocents, and I'm sure you do too.

The President's strategy is nonetheless a good one—probably good enough to preserve his party's House and Senate majorities this coming November, if he doesn't do something dumb in the meantime.

I did my due diligence, anyway; sat through the whole thing. Dr Johnson's remark about Paradise Lost is of course apt: "None ever wished it longer."

The Lenny Skutnik business is now totally out of control, I see. For the benefit of younger readers, I should explain that Lenny Skutnik was the first model citizen brought to the State of the Union speech. He had performed a heroic rescue in January 1982 so Ronald Reagan invited him to the SOTU speech that year. His name thereafter became a generic tag for any citizen so honored. I've even seen it used as a verb: "So-and-so's going to be Lenny Skutniked this year."

Mighty oaks from little acorns grow. No State of the Union speech is considered complete nowadays until we've been shown half a dozen of these people at least. God bless them all, but there's a right time and place for everything. The celebrating of our nation's heroes—a category that, this being the 21st century, of course includes victims—does not belong in a merely political event.

The tradition of Lenny Skutniking cynically enlists normal human emotions of admiration and sympathy in a nakedly political cause. We didn't do this before 1982. I wish we'd stop doing it. Our political life is already over-emotionalized. 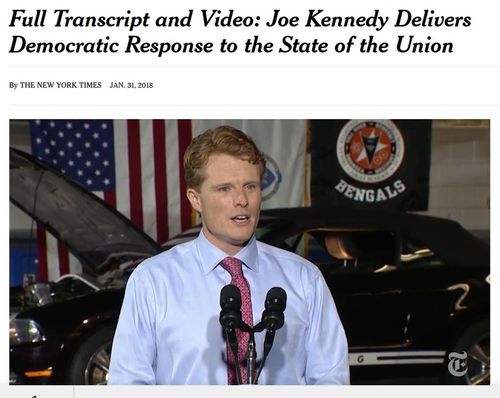 Still in a due diligence frame of mind, I did my best to watch the Democrats' response speech, which was given by some 14-year-old Kennedy princeling. [Full Transcript and Video: Joe Kennedy Delivers Democratic Response to the State of the Union, NYT, January 31, 2018] I hung in there for a few minutes in hopes he might offer something that made sense. But when he said, "This is not who we are," I gave up and went and went back to my jigsaw puzzle, which had been calling to me all evening from the next room.

Now to the President’s comments on immigration. Bill Buckley once scoffed at some public figure for saying that politics is the art of the possible. Was there, Bill asked, any more hackneyed cliché in the political lexicon?

Well, no, there isn't. The thing about clichés, however, is that they're true. Our human nature is so easily distracted away from truth that anything, no matter how shop-worn, anything that draws us back to the contemplation of truth, should be smiled at, not scoffed at.

Politics is the art of the possible. Our President seems to know that.

I'm not sure that "know" is the right word there. The President doesn't strike me as a person who sits down in a quiet room and carefully thinks things through, after reading up on the relevant topics. He's more of a person with superbly good instincts for dealing with people—a master social tactician. By instinct, honed through decades of competitive dealings in the major-league construction business, he has become expert in putting opponents on the wrong foot and getting what he wants.

One area of human activity in which those kinds of honed instincts really pay off is gambling. The problem with gambling of course is, that sometimes even the best gamblers lose.

That all comes to mind in regard to the President's January 29th immigration proposals, and their probable fate. January 29th, I should say, was the official release date of the proposals; we knew what they were, and were commenting on them, some days before.

The proposals, as we've been saying, are nothing to make patriots stand up and cheer. With a bit of congressional tinkering—and presidential proposals don't get to be federal laws without some of that—they could easily morph into another 1986-style bait-and-switch: mass Amnesty of millions of illegals up front, with lots of promises for enforcement and reform. The promises then get forgotten when enough donors have harassed their Republican congresscritters, or when Democrats get control of Congress again. Then we're back where we were before, but with a few million more Democrat voters heading to the polling stations each Election Day.

The President's proposals say nothing about E-Verify or birthright citizenship. They do curtail chain migration, but only effectively after 15-20 years because they permit the current backlog of immigration applications to clear.

They do end the Diversity Visa Lottery, but only sort-of: they actually "re-purpose" it. I guess that means those fifty thousand green cards will no longer be gained by sheer luck, but instead will go to more bogus refugees and software coolies from Bangalore.

They do fund a border wall; but from the public fisc, not—as should be done—by taxing remittances.

So the President's proposals are thin gruel. They have been enough, though, to get the Democrats screeching and fainting and sitting motionless through the State of the Union speech with their angry faces on above their Kente cloth shawls.

Probably that was the point. As I said, the strategy here is to out the Democrats as sternly, resolutely determined to favor illegal aliens over Americans and outhouse countries over our beautiful own.

To judge from opinion polls, Americans at large aren't too ill-disposed to the DACAns. Sure: Lots of us would like to see them loaded into commandeered school buses and shipped to the border. But there's a big good-natured soft center that says: "Hey, give them a break … but could you then please solve the problem, stop any more coming in? And speaking of problems, could you please address this one and this one and this one …"

Still, that good-natured soft center, as good-natured and soft-hearted as it may be, isn't going to turn out to vote enthusiastically for a party that sees Amnesty for the illegals as the be-all and end-all of national policy-making, prior to anything that advances the interests of Americans.

There you see Donald Trump's art: he's fixing the Democrats in voters' minds as exactly that party.

You might say: as a strategic rhetorical ploy, that's all very well, but if he just wanted to get a big negative reaction from the Democrats, why didn't he give it them with both barrels: E-Verify, birthright citizenship, tax on remittances, full and immediate annulling of chain migration, unconditional end to the diversity green card lottery?

The President's gamble here is that the Democrats will keep up their angry-face resistance for nine months, and go into the midterms as the party obstructing reasonable reform on behalf of foreign scofflaws.

I hope he wins that bet. But, as noted, the problem with gambling is that sometimes you lose.

Losing would in this case mean the Democrats saying: "Okay, we'll buy your proposals. Bring them to Congress, allow us to tweak things a little here and there as we customarily do, and we'll vote them through—no prob!"

That would be a disaster for patriotic immigration reform.

Yes, it's a gamble. A set of proposals more Radio Derb-compliant would have been less likely to be accepted by the opposition, but more easy for the Democrats and their Main Stream Media shills to portray as crazy extremism.

I think Trump played a good hand here, doing what he could. If it works, his party will have two more years in control of Congress, with a possibility of real immigration reform and a GOP in awe of his tactical skills and so more inclined to go along with his program.

There is real possibility here. Not certainty: You don't get certainty in politics.