Reassuring Derb And His Radio Derb Listener On E-Verify

Recently John Derbyshire enlightened readers on the problems with the current E-Verify system brought to his attention by one of his multitude of listeners. The gist of the problem with E-Verify is that corrupt employers can game the E-Verify system to extend employment for illegal aliens who have Tentative Non-Conformation (TNC) of their right to work in the United States.

The E-Verify system is a computer based employment verification system for employers who want to avoid the legal liability of employing illegal aliens. It is based on matching names, dates of birth, photographs, and social security numbers, as well as Alien Registration Numbers, commonly called Alien Numbers or A#s by those in the business, from those presented by an employment applicant to the records held by the Department of Homeland Security (DHS), the Social Security Administration (SSA), and the Department of State (DOS).

Besides access to information held by the Federal government, E-Verify is supplemented by the Records and Information from DMVs for E-Verify (RIDE) program that provides DHS access to driver's license photographs to supplement access to passport photographs and photographs of aliens held by DHS.

It is not a perfect system, and the claim of the supporters of illegal immigration is that it will result in denying American citizens, and to a lesser extent, legal aliens, employment. Such claims are not born out by the record, which is ever increasing accuracy in both the identification of illegal aliens and the verification of those legally authorized to work, both U.S. citizens and legal aliens.

From the 2012 report on E-Verify, Evaluation Of The Accuracy Of E-Verify Findings:

The erroneous Tentative Non-Confirmation (TNC) rate for E-Verify in FY 2009 was 0.3 percent and has been declining over time.

The rate for all noncitizens was 1.5 percent.

Now Derb and his listener are concerned with those who will try and game the system once it is made mandatory. Currently, E-Verify is generally not mandatory, but is mandated in certain cases where an employer settles a case of illegal employment with U.S. Immigration and Customs Enforcement (ICE). However, the E-Verify system starts out with requiring employers to post a notice that E-Verify is used, which in itself discourages illegals, especially since it's conveniently posted en Espanol as well. Usually this is enough to dissuade most illegal aliens. 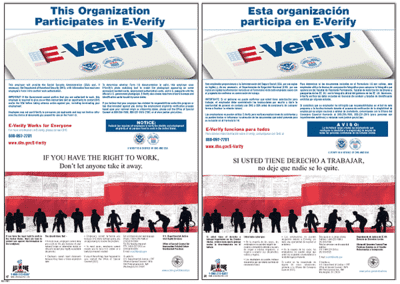 One of the great things about E-Verify system is that employers are required to create a "paper trail" of what they do with their employers and what steps they take if there is a TNC with a new employee. Derb and his reader are greatly concerned that during the process where an employee gets a TNC, the employee remains employed, which is correct.

Now both the E-Verify manual and Derb's listener emphasize that the employee cannot be terminated during the employment verification process. However, that is not a correct interpretation of the law, as the prohibition is actually only on taking action solely based on a TNC.

An employer is always free to take any action based on information that comes to their attention, and is prohibited from employing any alien they reasonably believe may not be authorized to work. Nor are employers required to allow an employee with a TNC to start work. An employer is free to wait until the end of the process to start employment.

But, of course, we are dealing with those employers who don't care about the immigration laws and will be gaming the system. This is actually where E-Verify is strong, as it creates a record of both the initial hiring and the process the employee must go through to fix their TNC.

For instance, the employee must go to the SSA to fix a TNC based on their name or Social Security Number (SSN), or go to U.S. Immigration and Customs Enforcement (ICE) or U.S. Citizenship and Immigration Services (USCIS) to fix problems with employment authorization for aliens. In this paper trail, if the employer is gaming the system, they simultaneously create a record of their participation in any illegal scheme to deceive the E-Verify system, thereby creating knowledge of the crime of employing illegal aliens, a violation of Title 8 United States Code Section 1324a, Unlawful Employment of Aliens.

And this knowledge fulfills the mens rea or intent requirement in criminal prosecution. Something independent attorneys and corporate counsels advise their clients and employers to avoid. Add to the paper trail compelled by a mandatory E-Verify system with the no-match letters from the SSA, and a air-tight case of criminal liability is created for the offending employer, something not recommended if one wants to maintain one's liberty.

So, while E-Verify is not perfect, it is a very strong tool against the hiring of illegal aliens by unscrupulous and other employers. So rather than doomsay on the issue, welcome it as one more tool that President Trump can aggressively use against illegal immigration, because, in the end, E-Verify is only as good at the President behind it. It won't work during the Obama Regime Administrative Amnesty.

But the best argument in favor of E-Verify is that the Treason Bar hates it and thinks it's racist.