As an Oklahoman, I can testify sports at all levels are big here in Flyover Country. They are right up there with Mom, apple pie, patriotism and respect for the military. Evangelicals are just as sports crazy as everyone else and it’s rare to find an evangelical preacher who’s not a bigtime sports fan. Churches even organize parties to view the Super Bowl which is, after all, on a Sunday.

Which is why it’s so significant that, here in Middle America, Donald Trump is winning his war with the NFL.

Mike Pence’s walkout of the Colts-49ers game is the latest blow the Trump Administration struck at the National Football League. [Vice President Mike Pence leaves Colts-49ers game after players kneel during anthem, Fox News, October 8, 2017] A leader has to make hard decisions. But an effective leader forces others to make hard decisions! Trump has done just that, exposing the NFL as a corrupt, elitist and unpatriotic organization that protects criminals and holds the historic American nation in contempt.

Trump never used legal action against the NFL, merely the bully pulpit. The NFL could have simply ignored him. But instead, they fell into his trap.

NFL players are free to support Black Lives Matter or anything else on their own time. But during a game, they are at work (and are paid very well for it). Like any other employees, they can’t just do anything they want.

The NFL has a game operations manual which states:

But the NFL does not enforce this, because it doesn’t want to be called racist. However, it can’t credibly claim to be supporting the players’ right to “free speech”— [Goodell Ignoring League's Own Rules in Letting Players Protest Anthem [UPDATED], September 25, 2017]

Oh, but the NFL did allow Colin Kaepernick to wear socks portraying policemen as pigs.

Some say Trump is wasting his time with the NFL imbroglio instead of policy. But it isn’t an either/or situation. Trump is showing his base that this tax-payer subsidized scam is now an enemy of the Historic American Nation, potentially waking up millions of people.

Sports in themselves aren’t unhealthy. But fandom has become an obsession for too many American men, who obsess over their teams while ignoring problems in their families, churches, communities and nation.

To quote Orwell, “Heavy physical work, the care of home and children, petty quarrels with neighbors, films, football, beer, and above all, gambling, filled up the horizon of their minds. To keep them in control was not difficult.”  [1984, Chapter 7] (By “football” Orwell meant soccer, but the principle is the same).

Our country faces enormous problems including mass immigration, a demographic transformation and a totalitarian multicultural Left which really threatens our freedom.

Yet conservative sports fans have continued to rave on about their sports heroes and favorite teams.

The NFL makes billions off of ordinary Americans. It enjoys sweetheart deals with local governments which force taxpayers to help finance their stadiums, and then still charges an arm and a leg for tickets and parking. Their players are millionaires, some of whom can’t stop committing crimes, while the NFL (the “National Felon League”) protects them.

And despite all these perks, the NFL defends players who won’t salute the American flag.

The sheer shamelessness of it all is unmistakably waking up Middle America. Fans are beginning to boycott games or burning their paraphernalia. Those fans who do still attend are booing at games [N.F.L. Anthem Protests: Players Kneel, Stand and Hear Boos, By Benjamin Hoffman and Ken Belson, New York Times, October 1, 2017]. 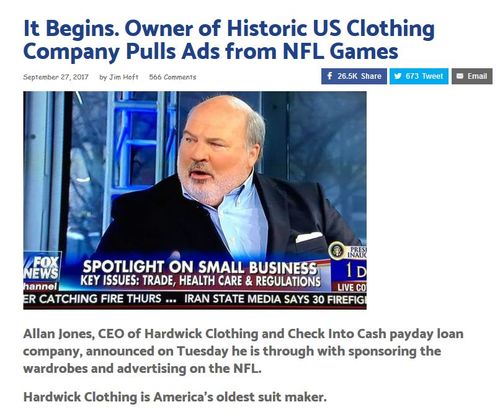 And sponsorships are being re-considered and even cancelled.

And, in the Louisiana legislature, state support for the New Orleans Saints has been called into question, with Representative Kenny Havard going so far as to call “for Louisiana's government to pull state funding, tax breaks and other support from the professional football franchise. “ [Louisiana lawmakers question New Orleans Saints state funding after players protest , by Julia O’Donoghue, The Times-Picayune, September  26, 2017].

The worst part for the owners: the “woke” black players are going to demand even more concessions. Amid plummeting favorability ratings for the league, ESPN just suspended Jemele Hill for floating a boycott of Cowboys sponsors in protest of Jerry Jones’s declaration players must respect the flag [ESPN Reporter Who Tweeted That President Trump Was A ‘White Supremacist’ Suspended After Second Violation of Social Media Policy, by Dylan Gwinn, Breitbart, October 9, 2017].

By enabling their players, the NFL owners have fallen into a trap that could destroy the league.

Trump couldn’t have planned it any better himself.