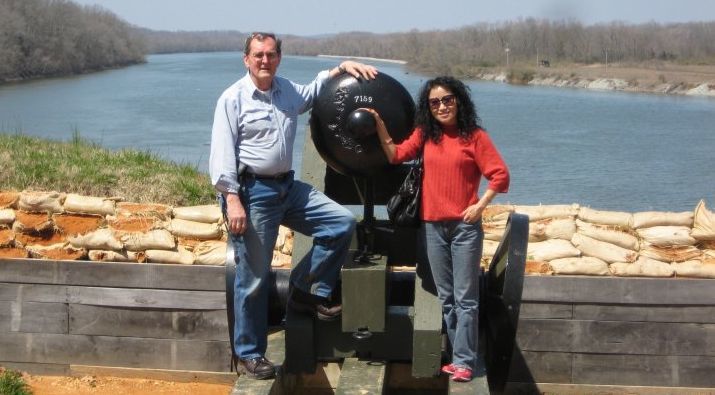 John Derbyshire On The Babes Of AMERICAN RENAISSANCE

I had the privilege of speaking to the American Renaissance conference in Tennessee this past weekend. Here are just a few random personal notes.

Tennessee. A lovely state, in which I’d like to spend more time. The Mrs. and I went down there a couple of days early to do some sightseeing.

Here we are on one of the Confederate batteries at Fort Donelson, looking downriver, whence Union Flag Officer Andrew Foote’s little fleet steamed up to attack the fort on St. Valentine’s Day, 1862. That particular foray didn’t go well, but the fort soon fell anyway. 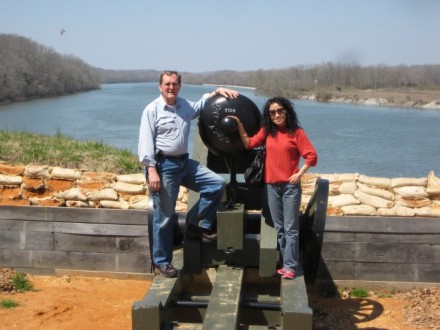 Say what you like about the Feddle Gummint—goodness knows, I’ve said plenty—but the National Park Service does a great job with these battlefields. In furtherance of my project of turning myself into a Civil War buff, I intend to explore more of them whenever I can.

At Fort Donelson there’s a 15-minute movie they show at the Visitors Center to set you up for the tour. It concentrates on Grant and Buckner and their long acquaintance. Mooching around old battlefields is not really Mrs. Derbyshire’s thing; but the personal aspect of the Grant-Buckner encounter got her attention, and thereafter she was clambering over the guns and peering into the powder magazines as enthusiastically as I was. We may have two Civil War buffs in the making here.

Another thing that got my lady’s attention was the Confederate Monument.  She: “You would never see such a thing in China—a monument to those who fought on the losing side.???????, that’s how we think.”

O’Rourke’s law in action. Some years ago P.J. O’Rourke was attending some rally on behalf of the homeless in Washington, D.C. Noticing the straggly hair, coke-bottle glasses, poor complexions, ill-fitting clothes, and globular silhouettes of the gyno-Americans present, he hypothesized that the movement would go nowhere much because rising causes attract pretty women.

If that is right, American Renaissance has a bright future. There were a surprising number of attractive young women in attendance. In fairness I should also say that, so far as this irredeemably heteronormative observer could judge, the number of good-looking young men was also much higher than I expected.

Speechifying. Far be it from me to make invidious distinctions among the speakers, but I must say I thought Ramzpaul was particularly good.

He actually did something difficult: He gave a funny and entertaining presentation that yet managed to cover matters of substance. Under that subversive wit there’s a serious man thinking serious thoughts.

Next Slide, Please. If you’re saying that, you should be disqualified for life from giving PowerPoint presentations. Get a dongle!

A Hero of Our Time. That’s Jared Taylor, the principal and onlie begetter of American Renaissance.

Jared has been plowing his lonely furrow with dogged determination for over twenty years now, in the face of ferocious hostility from all the petty tyrants of our society, including efforts to deprive him of his livelihood (which has nothing to do with American Renaissance or its goals).

He and I have differences of opinion on some particular topics, but I cherish Jared’s friendship and think foul scorn on those who, in the name of a false and malicious ideology, are trying to bring him down.

(Come to think of it, I don’t have much higher regard for those self-styled conservatives who were too cowardly to speak up in Jared’s defense when previous AmRen conferences were scotched by radical-Left agitators. What happened to the Voltaire Principle?)

Jared once quoted to me Robert E. Lee’s remark that “Duty is the sublimest word in our language.” That is undoubtedly how he sees his efforts. Spend ten minutes in this man’s presence with an open mind: you will then see all the cant about “hate” and “supremacy” for the facile gibberish that it is.

One day the canters will be utterly forgotten; but if our civilization survives, there will be statues to Jared Taylor in public squares.

Take-Away Quotes. I’ll leave you to harvest your own when AmRen puts out their full DVD of the conference.  Here’s one that stuck in my mind. It was from Jared’s own address.

“Most people are incapable of holding an unfashionable opinion.”

Apothegms don’t get truer than that. Meditate on it: It explains a lot.

An Apology. I owe an apology to Jared and his followers.

Some years ago I casually retailed unflattering hearsay about the AmRen conference attendees.

I should have sought a second opinion.

For the record, I regret having been so careless, and report that the people I met at last weekend’s conference were intelligent, well-mannered, and non-crazy patriots all. I heard no buzzing.

Lunatics in Attendance. Not that there weren’t crazy people in attendance at Montgomery Bell State Park. There was a whole raft of them. However, the park police kept them corralled away from conference attendees, so we could observe their capering and shrieking with detached amusement.

The protestors’ signs—see the last two pictures here—made even less sense than usual, and were surely inappropriate for persons claiming to be enemies of “hate.” I mean, really: “REPEAT DRESDEN”? I guess they couldn’t spell “Hiroshima.”

I’m glad to know, however, that the anti-AmRen crowd are hostile to gun control. “THIS MACHINE KILLS FASCISTS” said one of the signs, with a crude drawing of what looked like an AK-47.

Although perhaps a weapon emblematic of a regime that murdered tens of millions of its own citizens might not have been the best image to have used in this context. That’s not to mention other nations’ citizens. The bullet marks that could still be seen on public buildings in central Budapest when I visited that city in 1964 were presumably made by AK-47 fire.

(A fellow attendee, a gun enthusiast like myself, remarked as we watched the scraggy-bearded, ill-kempt, and—of course!—uniformly white protesters waving their signs, that if any one of them knew which end of an AK-47 the bullet came out of, he, my companion, would be mighty surprised. Me too.)

Those signs were very crude, by the way: rough patches of cardboard scrawled on with Sharpies. This was the best they could do? For pity’s sake, someone give them George Soros’s phone number.

Southern hospitality. I can’t sign off without a word of thanks to the State of Tennessee employees who made our trip so enjoyable.

The staff at Montgomery Bell park were all friendly and helpful. The state rangers who kept those protesters neatly corralled were courteous and professional. (I thought they were in fact a bit more courteous than duty called for. I got the impression they would have been happy to sit in the conference hall listening to the lectures...)

Thanks to everyone who made this a successful conference, most especially to Jared and his staff. We had a great time, renewed old friendships and made some new ones, and look forward eagerly to future conferences.

VDARE.com, by arrangement with AmRen, has already posted Jared’s address to the conference. My own will be up in the next day or two.