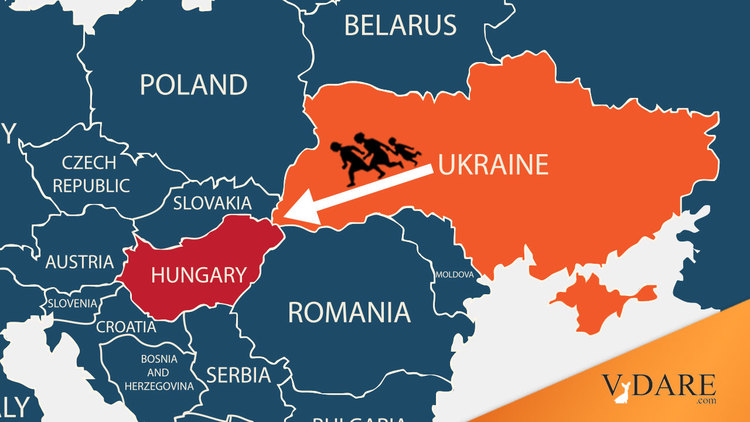 JOHN DERBYSHIRE: If We MUST Take Refugees, Why Not Insist On Cultural Affinity?

Earlier: JOHN DERBYSHIRE: *100,000* Afghan Refugees Coming Here???!!! Why Not Settle Them Amid Co-Ethnics In The 'Stans?

Last night, Thursday night, I attended a Center for Immigration Studies event. CIS is based in Washington, D.C. but they hold occasional events in New York City. They have good speakers with interesting things to say about immigration.

These New York events were suspended for the duration of the COVID panic. That panic now being over—by general popular agreement, if not by government declaration—CIS has resumed them. I was glad to be there for this first one following the resumption.

CIS, I should say, has no formal relationship with VDARE.com. They don't endorse anything we say, and we don't endorse anything they say. Our positions are more radical than theirs. For example: To the best of my knowledge, CIS have never called for a total immigration moratorium, as we have. Also, they limit themselves very strictly to immigration issues, not venturing into other topics related to multiculturalism and national identity, as we do.

None of that has prevented the Southern Poverty Law Center and their glove puppets at Wikipedia from designating CIS as an extremist group of hateful racists filled with hate, burning crosses on immigrants' front lawns and so on.

That's for CIS themselves to deal with though—which they do, calmly and professionally.

VDARE.com and CIS are, as I said, unrelated organizations with different approaches. However, sharing CIS's interest in immigration issues, I naturally attend their events when I can, to hear what their invited speakers have to say.

So there I was on Thursday night to hear a Hungarian scholar, Kristóf György Veres, give us his country's perspective on immigration into the West. As a Hungarophile from way back, I was particularly interested in what Dr. Veres had to say.

He did not disappoint. Speaking in excellent English, he took us through some basic issues with the official, UN-sanctioned definitions of terms like "refugee" and "asylum seeker." Then he described the events of the mid-2010s, when people escaping the Syrian civil war, mixed in with opportunists from places further east and south, flooded up through the Balkans. At its south, Hungary has nearly four hundred miles of border with Serbia, Croatia, and Slovenia, so the flood hit Hungary with full force.

Hungary responded appropriately; appropriately, I mean, to the ideals of national sovereignty we cherish here at VDARE.com [Ukrainian Refugees and Europe: A Marathon, Not a Sprint, by Kristof Gyorgy Veres and Viktor Marsai, CIS.org, April 2, 2022]. They built a good stout double barrier fence along their southern border and defended it very vigorously against would-be invaders—water cannon, tear gas, nightsticks and hand-to-hand engagement when unavoidable.

That solved the problem. It also offered a splendid example of how to solve this kind of problem, for any other country willing to learn—a category that apparently excludes the USA.

But this border also needed a lot of well-trained manpower to keep it secure. When the Russia-Ukraine war started up, that presented the Hungarians with a new problem.

Up in its northeast Hungary has an 85-mile border with Ukraine. Naturally there have been a lot of Ukrainian refugees arriving at that border. This hasn't been so much of a problem in itself since Ukrainian refugees have visa-free access to the European Union nations, of which Hungary is one.

However, a lot of people have been showing up at this border who are not Ukrainian nationals. Whose nationals are they?

They are nationals, says Dr. Veres, of the Middle East, of North Africa, in some cases of sub-Saharan Africa. What were they doing in Ukraine? Studying at colleges there, they tell the Hungarian border guards, or in some cases employed by Ukrainian companies.

Wow, who could have predicted this? (Me). pic.twitter.com/SCDNvZbTgi

Their stories are often hard to verify as Ukrainian corporate HR departments and college administrations have more pressing things on their minds right now than complying with Hungarian requests for documentation.

The refugees are mainly young men, too, which distinguishes them from genuine Ukrainian refugees. Ukrainian men are mostly forbidden to leave the country, which needs them for national defense work.

Could it be that some of these non-Ukrainians are opportunists using the war as a way to get into Europe? The Hungarian border force has to investigate this, while also carrying out the routine processing of Ukrainians. That's manpower-intensive, leaving nothing like enough personnel to guard that southern border with the Balkans.

It was fascinating to hear first-hand nitty-gritty stuff like this from a scholar who's researched it and been intimately involved with it. (And I should say that I was listening too intently to take proper notes. If I have misrepresented anything Dr. Veres said, I hope he'll email me at VDARE.com with corrections, which I'll be glad to publish.)

I did, though, hearing those stories about non-Ukrainian refugees from Ukraine following on from Dr. Veres' remarks about the official definitions of terms like "refugee" and "asylum seeker," I did find myself thinking that those definitions need work. Most especially I think we need to argue for affinity clauses in the definitions.

Certainly there are genuine refugees and asylum-seekers from Middle East Muslim countries; likewise from Sub-Saharan African countries and East Asian countries—Burma, North Korea—and now, with this war going on, from Ukraine, a Western country. I don't doubt that, and sympathize with these people's sorrows.

There are, however, plenty of stable and prosperous Middle East Muslim, sub-Saharan African, and East Asian countries. Ukrainian refugees are being taken in and treated well by other Western countries. Why should not refugees from Syria, Afghanistan, and so on be similarly taken in by their brother Muslim nations? Why should not refugees from Ethiopia, Eritrea, and the Congo be taken in by their fellow Africans?

East Asia seems to be much less of an issue here. The Rohingyas of Burma, who are mostly Muslims, have been taken in by Bangladesh, although not always with good grace [Bangladesh: Move Rohingya from Dangerous Silt Island, Human Rights Watch, July 9, 2020]. North Koreans only want to go to South Korea, and South Korea takes them.

Now I can hear you saying: Come on, Derb, you're being a bit naïve, aren't you? Refugees from Afghanistan, Eritrea, and Burma don't want to be settled in Jordan, or Kenya, or Bangladesh. They want to be in the West, where the living is good. Didn't you hear Dr. Veres use the phrase "asylum shoppers"?

Yes I did. I also heard him talk about the accusations of racism being levelled against Hungary by people seeing Ukrainians waved through the border into Europe while those darker-skinned non-Ukrainian young men are detained and questioned.

That's why I think the United Nations High Commissioner for Refugees, that is the United Nations refugee agency, needs to get to work putting Affinity Clauses into its rules. It should be the case, wherever possible—and it's hard to think of situations where it wouldn't be possible—for refugees and asylum seekers to be taken in by nations with which they share some cultural affinity.

You might respond that yes, maybe it would; but how do we get the United Nations, which is an anti-Western organization, to change its rules in a way that would keep Third World refugees out of Western nations?

That's a tough one, I'll agree; but there must be some avenues we could pursue. How about we threaten to stop helping fund the UNHCR until they get to work on those affinity clauses? For full effect, of course, we'd want other Western countries to join us in threatening. We should at least set an example, though.

And what about the shrieks of RACISM! that would inevitably rise up all around?

I don't see any way to avoid that; but there are things we could do to impose affinity standards without any mention of race. The expression "cultural distance" is already current, and so far as I can tell quite respectable, in discussions of related issues. It won't stop the most fanatical anti-white ideologues from shrieking, but it might pass muster with the U.N. rule-writers, if seasoned with some financial incentives.

So, an interesting and thought-provoking event in New York City last week. The main thoughts it provoked in me were about the need to get affinity clauses into the international rules on refugees and asylum.

Is there any prospect of success with that? Well, I wouldn't bet the farm on it; but we'll be doing something useful if we can just get the concept out there in general discussion. If people don't like the word "affinity" by all means let's use "cultural distance" instead. I won't quibble over an extra syllable.

There's a lot to be said for just getting ideas out there. You never know who'll pick them up.