Hungary’s Prime Minister Viktor Orban has been one of the more stalwart defenders of the nation state, particularly his own during these invasive times. Muslims are not viewed positively in Eastern Europe, where Ottoman tyranny extended into the region. Part of Hungary was ruled for centuries by the Ottomans following the 1526 Battle of Mohacs.

Below, Middle Eastern men mobbed the Budapest station in 2015, hoping to catch a train to the generous German welfare state. 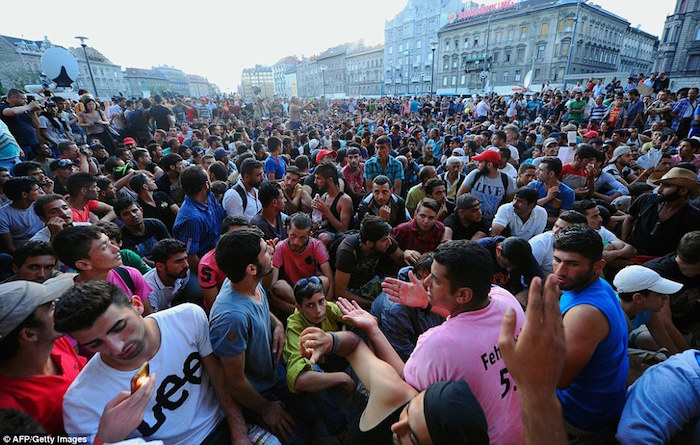 Here is a recent speech PM Orban gave to a graduating class of Hungarian Border Patrol guards. Very cheering, I thought. And when is he going to visit President Trump in Washington, as already discussed?

PRIME MINISTER VIKTOR ORBAN: Dear ladies and gentlemen, dear parents and family members, we came together here today to witness of our fellow citizens taking their oaths. Taking oaths in which they promise they will defend — if necessary, with their lives — Hungary and Hungarian families. To defend our homeland, our women, our homes and our children…

This is the centuries-old moral command. This command gives seriousness and prominence to the present moment. Today you are not just getting a job, a simple position; not just taking an office and not just starting work. No, today you are stepping into service for our homeland and the Hungarian people. With this you accept a higher calling. You — respected oath-takers — can be proud of that. I am asking you to be proud, because your work and resolve are a basic condition for the peaceful future of Europe and Hungary.

You should be also proud that today you are joining a well-tested unit, which has been able to answer the hardest challenges, the frontier warriors of the modern age, the community of uniform-wearing Hungarians police, border control officers and soldiers, whom we can thank, that today we can live in peace and safety here.

Respected ladies and gentlemen, they choose a difficult time to report for duty. Although the daily reports no longer speak of tens of thousands, but only a couple of hundred illegals trying to cross our borders, we cannot sit back comfortably. Nobody should lull themselves into illusions. Right now, even at this moment, we are under siege, The flood of migrants, has slowed down, but it is not over. What happened is that between two large assaults We got a breathing space to strengthen our lines of defense, for the recruitment and training of our forces and to place them into service. The storm did not die down; it has just fallen a bit quieter. The pressure on our borders over the next of years will not cease.

There are still millions preparing — in a hope of better life — to start their journey. At this moment hundreds of thousands are considering starting the trip towards Europe. We can’t count on Brussels and the European Union! Just the opposite, rather they make our job harder. The truth is, we can only count on ourselves. We must defend our borders ourselves.

The migration crisis — respected ladies and gentlemen — will continue until the causes are resolved. It will stay on the agenda, until everywhere they admit that migration is the Trojan Horse of terrorism. Those who are coming to us do not want to live according to our culture, but their own, yet under European standards of living.

Respected ladies and gentlemen, respected oath-takers, I would like to ask you to be definite and humane. Attend to your duties with the rigor of the [law] code, but also with the commandment of humanity. Today you are enter to the service of law. And the law applies to everyone. It includes those migrants who wish to illegally cross the official borders of Hungary. That is the reality and it cannot be overwritten by any kind of artsy-crafty human rights mumbo-jumbo.

The last couple of years taught us that we can only resist the migration pressure if we show force and unity and band together. So far we have succeeded. For this reason we can be thankful that Hungary today is one of the safest countries in Europe. If the world sees that we can defend our borders, if they see that the strengthened Hungarian border fence [wall] is impenetrable, and that we still insist on our own laws and do not for a moment become uncertain, then nobody will attempt to enter Hungary illegally. The Hungarian people have the rightful expectation that the only persons who may enter Hungarian territory, are those who have been thoroughly examined, and whose identity has been confirmed. What his intention is and what he wants.

Respected ladies and gentlemen, we Hungarians do not want impossible things. Just the opposite: we want simple things. We want the sort of country where Hungarians will happily start a family, because they know their children will have a better life than they had. We want a Hungary where everybody has work, and where everyone can receive the respect appreciation they deserve, based on their contributions. We want the sort of Hungary, and the sort of Europe, where being Hungarian means pride and appreciation. Where our traditions are respected, where our history culture are respected. We Hungarians want the sort of Europe where we can live our Hungarian lives. For in this Hungary — which is in our heart — the first condition is safety.

And a safe life can only be found where the law and order are protected by stout-hearted uniformed defenders, who have taken an oath to do so. People like you. Who are courageous, resolute, prepared and ready to fulfill their duty and defend their country. You are at the same time defenders of the free Hungarian life and the hopeful Hungarian future. I urge you to be as proud of yourselves as we are of you. For your work, I wish you bravery and perseverance; for your families I wish good health. God bless Hungary!