Another Border Patrol agent in service to the nation has been slain by its enemies. Agent Rogelio Martinez was killed, and his partner seriously injured, in what has been described as an “attack” along the southern border [Border agent killed, another injured during ‘attack’ near Texas southern border, Fox News, November 20, 2017]. President Trump has already expressed his support for the victims. 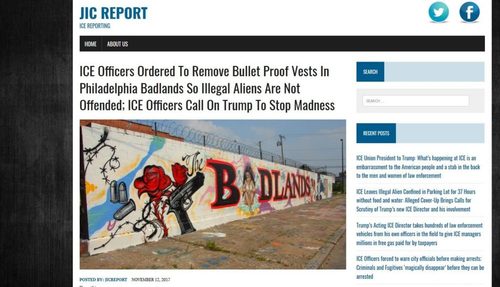 But what does Trump’s support mean? Frontline immigration enforcement officials are already under attack—and sabotaged by their superiors in the federal bureaucracy who don’t want to stop illegal immigration.

Patriot agents are fighting back and taking their message to the American people with a new website for whistleblowers: JIC Report.

The JIC Report is, in its own words:

[A] revolutionary new website that allows employee whistleblowers from within Immigration and Customs Enforcement (ICE) to communicate directly with the American people in an effort to create public awareness, provide oversight and transparency, and seek an end to corruption and mismanagement within ICE and the Department of Homeland Security (DHS).

This is not an anti-Trump site (ICE employees endorsed the President), it is, however, our only means of correcting an agency that is grossly mismanaged and has no outside oversight.

The name JIC Report is a play on the internal misconduct reporting system at Immigration and Customs Enforcement (ICE). The Joint Intake Center (JIC) is used to initiate investigations of ICE employees. No doubt this is ruffling feathers at the ICE Office of Professional Responsibility.

Some of the exposés made on the website are relatively minor in the grand scheme of things, such as wasteful take-home cars provided for ICE supervisors. More important are stories of ICE officers reporting they are being deliberately sabotaged by their own supervisors:

ICE Officers under the Salt Lake City Field Office of ICE Enforcement and Removal Operations (ERO) allege that they are under secret orders requiring them to provide the names and addresses of criminals and fugitives they seek to arrest so that prior notice can be given to city officials prior to ICE Officers entering their city and making an arrest.

ICE Officers allege that high-ranking city officials, to include elected law enforcement officials, “freaked out” when ICE Officers made completely safe, lawful arrests within city limits leading to complaints from the city and a “dirty back room deal” between ICE managers and city officials. ICE Officers believe knowledge of the deal goes all the way to ICE headquarters in Washington, D.C.

[ICE Officers Forced To Warn City Officials Before Making Arrests; Criminals And Fugitives ‘Magically Disappear’ Before They Can Be Arrested, JIC Report, November 13, 2017]

This and other allegations represent behavior which is not only disturbing, but illegal. These local officials are violating Title 8 United States Code (USC) Section 1324, Bringing And Harboring Certain Aliens, which prohibits aiding illegal aliens. They are also violating Title 18 USC 111, Impeding Federal Officers, which prohibits interference with Federal officers executing their duties.

And this is not the sole failing of ICE.  Due to shameless baby-waving by illegal aliens and their advocates, management fails repeatedly to enforce immigration laws and deportations. For example, ICE ERO management recently halted the deportation of an Albanian illegal who entered the country with a passport “that did not belong to her”—even though there was no court order to prevent the law from being enforced.

[Denada] Rondos, who entered the country illegally in 2002 with a passport that did not belong to her, had been ordered in September to leave the country and return to her native Albania. Her husband, Viron Rondos, is the owner of popular Cheshire restaurant Viron Rondo Osteria. Esty, Blumenthal and Sen. Chris Murphy wrote letters to Immigration and Customs Enforcement asking Rondos’ deportation be stayed and her case reopened by an appeals board.

Monday morning, the family learned that the Department of Homeland Security and the 2nd U.S. Circuit Court of Appeals had agreed to temporarily stay Rondos’ removal, citing a “forbearance policy,” said Erin O’Neil-Baker, the attorney representing her.

The forbearance policy, O’Neil-Baker said, is a seldom-visited agreement between the Department of Homeland Security and specifically the 2nd circuit court, by which Homeland Security can elect not to pursue deportation if the court is interested in re-examining a case.

The action by ICE is especially concerning because the woman’s request for asylum was rejected even by the very liberal immigration court in Hartford, CT.

Contrast this with the more discerning and enthusiastic ICE ERO officials in North Carolina who are sending a similar failed asylum seeker back home with enthusiasm. [Winston-Salem man who says he was victim of human trafficking could be deported today, by Michael Hewlett, Winston-Salem Journal, November 14, 2017]

The Department of Justice is also failing in the fight for immigration enforcement. For example, the State of California will soon be implementing legislation (AB 450) that prohibits employers from cooperating with immigration enforcement. But for some reason, Attorney General Jeff Sessions is not seeking an injunction against this interference with the federal government’s constitutional authority.

AB 450 is not the first California encroachment on federal immigration law, and not likely the last. As the courts, federal immigration agencies, and the NLRB are left to sort out federal from state legal rights and duties amid the detritus of this law, California politicians will likely be at it again, concocting new immigration laws, while figuratively quoting a former governor’s thespian line: “[We’ll] be back!”

To date, the DOJ has actually done nothing but bluster on Sanctuary Cities, California’s new Sanctuary State legislation, or AB 450. There has been no enforcement, no arrests, no injunctions, nothing but public demands for compliance that are contemptuously dismissed by criminals supporting illegal aliens.

The Attorney General needs to DO something. (And while he’s at it, indict Janet Napolitano for aiding illegal aliens.)

The emergence of JIC Report is simply a symptom of a much deeper problem: President Trump’s administration is. mysteriously, filled with those who do not support him or his agenda.

And even those who do support immigration enforcement, such as Attorney General Jeff Sessions, are not being aggressive enough in enforcing the laws.

This problem has been noted in other areas: for example, the tremendous damage H.R. McMaster and State Department bureaucrats have done on the foreign policy front [McMaster has the Islamophobes worried. Good. By William McCants, Politico, February 23, 2017]. But the Department of Homeland Security and the Department of Justice has to be the focus for immigration patriots.

VDARE.com has named names of some of the most blatant saboteurs in the bureaucracy

But even the lower levels of DHS in ICE are showing signs of going wobbly, including: As the murder of Agent Martinez and the emergence of JIC Report show, frontline agents are willing to put themselves on the line to hold ICE accountable. Agents want to do their jobs, even as they face danger and death.

If President Trump really wants to support these American patriots, he needs to do more than tweet. He needs to make sure his appointees both support his immigration patriot agenda and those agents in the field who are eager to make it happen.