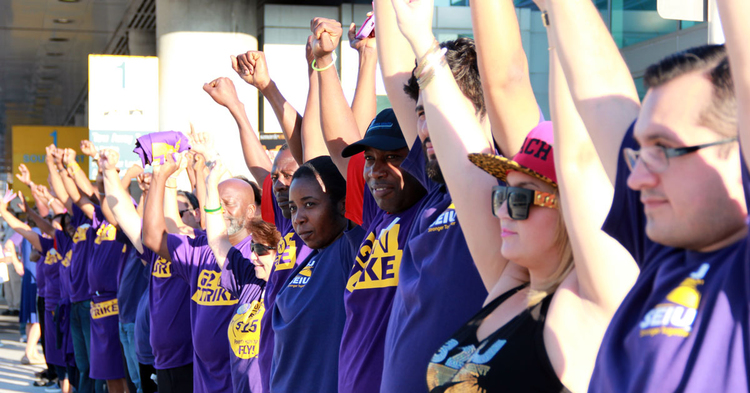 Who are the real thugs? Democrats attack congressional town hall protesters as "Brown Shirts"—likening taxpayer activists across the country to Hitler's storm troopers. But it's the Big Labor hoodlums clad in identical purple shirts—the uniform of Service Employees International Union members—who own the mob label.

Margarida Jorge, a former SEIU organizing director who now serves as national field director for the deep-pocketed, left-wing coalition Health Care for America Now, sent out a memo to her foot soldiers last week on how to counter Obamacare opponents. "You must bring enough people to drown them out and to cover all our bases so as to marginalize their disruptive tactics," she exhorted.

Local SEIU chapters echoed the call to brass knuckles. "It is critical that our members with real, personal stories about the need for access to quality, affordable care come out in strong numbers to drown out their voices," [Screenshot]urged the leaders of SEIU's Local 2001 in Connecticut, according to a memo exposed by The Weekly Standard's Mary Katharine Ham.

These were the first outbreaks of violence since the summer recess began. And that's no coincidence. SEIU President Andy Stern, the militant social worker turned union heavy, boasts of his organizing philosophy: "(W)e prefer to use the power of persuasion, but if that doesn't work, we use the persuasion of power."

Last April, SEIU bussed in hundreds of Purple Shirts to a labor meeting in Detroit, where the union was battling a competitor over representation of nurses and health care workers in Ohio. The SEIU invaders ambushed the conference, sending one attendee to the hospital with a bloodied head and wounding several others. The competing union filed a restraining order against the SEIU. AFL-CIO President John Sweeney responded, "There is no justification—none—for the violent attack orchestrated by SEIU."

California Nurses Association Executive Director Rose Ann DeMoro condemned the violence: "There is an ugly pattern here of physical abuse and tactics of intimidation that have no place in either our labor movement or a civilized society."

SEIU and Stern's shock troops have similarly bullied companies from private equity firms to Burger King to food management company Aramark to security provider Wackenhut Services, who have resisted SEIU's attempts to organizer their workers. The Purple People have organized aggressive protests and a "War on Greed" campaign to pound the employers into submission.

In Oakland, Stern and his Washington crew imposed a trusteeship on a 150,000-member local that had publicly opposed SEIU strong-arm tactics. D.C. headquarters accused the local—known as SEIU United Healthcare Workers West (UHW West)—of financial malpractice and misconduct. The local fought back, charging the Beltway union leaders with manufacturing the allegations to retaliate and to distract from Washington mismanagement. The UHW West president, Sal Rosselli, quit the SEIU executive board and formed a new union in February 2009, which declared: "We don't trust them with our contracts, we don't trust them with our dues—we just don't trust them."

Team Obama and the Democrats—who together received more than $60 million in SEIU independent expenditure funds—remain mum about SEIU thuggery. Obama, after all, promised the SEIU on the campaign trail: "We look after each other!"

Accordingly, SEIU-endorsed Health and Human Services Secretary Kathleen Sebelius openly praised the union's drowning-out campaign against Obamacare critics in a teleconference call last week. She urged her "brothers and sisters" to keep doing what they were doing. SEIU health care chair Dennis Rivera of New York then railed against the "radical fringe" of "right-wingers," whom he accused of "terrorist tactics."