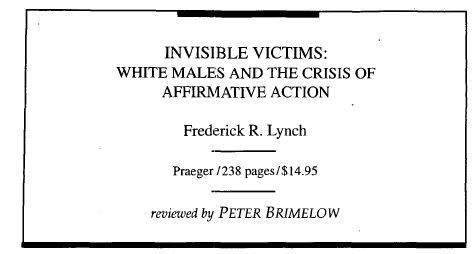 We just found my November 1992 American Spectator review of Invisible Victims, Frederick R. Lynch's seminal study of the impact of affirmative action (a.k.a.) quotas on white males. Quotas are a zero-sum game, so somebody has to suffer. But at that point, as Lynch noted, the double-think about affirmative action was so extreme that its very existence was denied. Similarly, the systematic repression of news and analysis about mass immigration meant that the subject was effectively excised from the public consciousness until well into the 1990s.

At one time, I regarded affirmative action as the key wedge issue in American politics. When I worked for Senator Orrin Hatch in 1979-1980, I put enough stuff into the Congressional Record under his name to ensure (probably) that he could never be confirmed as a Supreme Court Justice.  (Hatch subsequently abandoned the issue.) I think my intuition was confirmed by Stanley Greenberg's finding (see below) that quotas were a major factor costing the Democrats blue-collar support in the 1984 election—particularly remarkable because the subject had remained completely below the Mainstream Media radar. But, of course, the great Blight of Bush (I and II) meant that the wedge issue was never used to build a patriotic majority—in fact, in the disastrous 2003 University of Michigan cases, Bush II came down on the wrong side. Plus now we have the much bigger wedge issue of immigration.

Fred Lynch, who subsequently wrote The Diversity Machine: The Drive to Change the "White Male Workplace"

, is now a tenured professor of government at California's Claremont McKenna College. He is surprisingly cheerful. He writes:

"I've watched the 'diversity machine' roll through one institution after another largely because business-oriented conservatives and moderates: (1) didn't understand sociology's basic insight that systems, structures, and social movements obtain a life of their own, (2) thought they could eventually curb quotas and quota-thought through court challenges and changes in administrative law, (3) became obsessed with the 'anti-victim' mentality that suppressed complaints of working-class white males [Lynch says this macho attitude particularly inhibited talk radio, the white male's natural champion] ; (4) failed to connect demographic change with sociological and cultural change.  Ultimately, perhaps too late, they came to their senses on the political changes of immigration and globalization. You, your writers and readers have known all this for some time."

Lynch tells me he is particularly heartened by anti-diversity humor on satirical shows like South Park.] 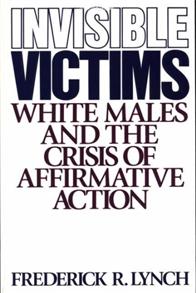 The collapse of socialism, in both its Communist and social-democratic variants, appears to be the central event of our times. Conservatives are hurt and puzzled that they haven't received more credit for being so right about it. One reason can be found in Frederick Lynch's pathbreaking Invisible Victims

: Socialism has actually just mutated. The lust to “put politics in command“, in Chairman Mao's phrase, has adroitly redefined itself in terms of equity rather than economic efficiency. While conservatives have been congratulating themselves about events overseas, the U.S. has been silently and steadily transformed by a race– and gender-based socialism.

Quotas were explicitly banned in the 1964 Civil Rights Act, but have nonetheless been spreading ever since. They have received extraordinarily little attention in the media and even less in academe. Of some 1,300 papers given at a recent American Sociological Association conference on “Race & Ethnic Relations,” only one addressed the topic. Lynch, a sociologist at Claremont McKenna College, has written the first major study of what affirmative action actually does to its main victims, white men.

The scale of the quota revolution has been far greater than conservatives—with the notable exception of Norman Podhoretz's Commentary—have yet realized, and merit-based hiring has been widely subverted. Take, for example, “race-norming”—fiddling test scores to produce racially proportionate results. Many state and local governments race-norm their General Aptitude Test Battery, taken by job-seekers and supplied to potential employers. Private testing agencies race-norm results to “EEOC-proof” their clients. (The federal Equal Employment Opportunity Commission regularly sues to force private business into quotas.)

“Affirmative action has been an administrative revolution imposed by judges and bureaucrats,” Lynch writes. Thus it was not easily opposed, particularly because much of it is implemented informally and orally. The secretiveness has only increased with the Reagan-Bush judicial appointments, whose growing influence has threatened the stability of the liberal judicial establishment. But affirmative action personnel openly say they intend to get around any law.

A few of Lynch's male victims were political liberals who felt obliged to rationalize their fate. But most acquiesced with varying degrees of anger. Some changed jobs. Usually totally isolated, these men felt that no one would help them.

They were right. The older generation of white male managers has in effect compromised with quotas, Lynch argues, because they think the impact will fall only on the younger, baby-boom generation. And the EEOC flatly refuses to accept white male discrimination complaints about corporations with approved—i.e., anti-white male—affirmative action plans. Litigation, for those who have tried it, proved expensive, exhausting, chancy, and immensely time-consuming—one case remains unsettled after more than six years. A further factor in the paralysis: the peculiar male personality itself. These victims seem really to have believed that grown men don't cry. A considerable number did not even mention their disappointment to friends, relatives, or fellow-workers.

Their wives almost never felt such inhibitions. “My wife is mad as hell; she's angrier than I am,” said one man. Some wives absolutely insisted on being interviewed for Lynch's study. One woman pointed out that discrimination against white males injures not only the men themselves, but their wives and families. “This 'hidden' or latent conflict generated by affirmative action between career women and homemaker wives has gone virtually unnoticed in the affirmative action literature,” Lynch notes.

He adds, “Karl Marx insisted that for any sort of class consciousness to arise, there must be communication of a common sense of oppression. With the mass media and the social sciences rarely recognizing the phenomenon, much less portraying it sympathetically, white males have been easily and silently victimized one by one.”

The media have been able to ignore anti-white discrimination partly because neither conservatives nor liberals raised the issue. For example, the likelihood that Robert Bork would find quotas unconstitutional spurred the civil rights establishment's fanatical resistance to his Supreme Court nomination. But White House lobbyists said nothing. The media elite's motives are also partly ideological. From J. Anthony Lukas's best-seller Common Ground

—which dealt with an earlier symptom of race-based socialism, busing—Lynch quotes a Boston Globe reporter: “If they [the Boston Irish] don't like integration, we'll shove it down their throats.” And Lynch was unable to find one television show portraying a white male being damaged by affirmative action.

Lynch cites a typical result of this systematic denial of reality: California Democratic Congressman Don Edwards, a mouthpiece of the civil rights establishment, was able to get away with claiming on the New York Times op-ed page that quotas did not exist—within weeks of three Supreme Court decisions about them. [More Racism From the G.O.P.  June 4, 1991] And supporters insisted that the (Bush-backed) 1991 Civil Rights Act did not impose quotas, although its key point was to override Supreme Court decisions that rejected the notion of racial imbalance as prima facie evidence of employer discrimination.

The result is a “spiral of silence,” whereby people assume their doubts are not shared and suppress them, thus mutually intimidating each other. But opinion polls show quotas are overwhelmingly unpopular, even with the “protected classes” themselves. And when the Democratic party asked pollster Stanley Greenberg to investigate blue-collar defection from the party in 1984, quotas emerged as the crucial factor.[See DEMOCRATIC DEFECTION REVISITED, Stanley B. Greenberg April 1, 1987, PDF] The party promptly tried to suppress Greenberg's report.

Meanwhile, the quota revolution rolls on. Its latest ramification is “diversity management”—permanent quotas, with no pretense that they are remedial or temporary, both for minorities and women, and increasingly for the ongoing wave of non-white immigrants to the U.S.

Quotas are inherently unstable. They inexorably create turf disputes between the various “protected classes.” And they inevitably exacerbate racial polarization, particularly as the articulate white middle classes begin to be hit. Which is why Lynch thinks affirmative action is headed for “crisis.” This vulnerability accounts for quota supporters' mounting fervor—above all their increasingly wild accusations of “racism.” There can be no doubt that, until conservatives break the extraordinary power of this taboo in American debate, they will never get control of the culture.

Getting control of the quota debate itself will be comparatively easy. Recently I wrote an article on Lynch's work in Forbes magazine —one of the very rare occasions when I've been allowed to address this topic. The first reactions, from victims, were pathetically grateful.

The later reactions—probably the result of Xeroxed copies reaching affirmative action enforcers who don't normally bother to read the business press [PB in 2007: This was before the internet!]—expressed outrage that the article had appeared at all. And there was none of this elaborate flimflam about the equal opportunity meaning equal outcomes or remediality or transitional periods with which liberal judges have cloaked their corruption of the law. These letters rashly echoed the response of the California prisons official quoted by Lynch. Asked about reverse discrimination against white officers, “He simply smirked and stated, 'It's your turn now.'“

This is an argument that even George Bush [Senior] could have won.