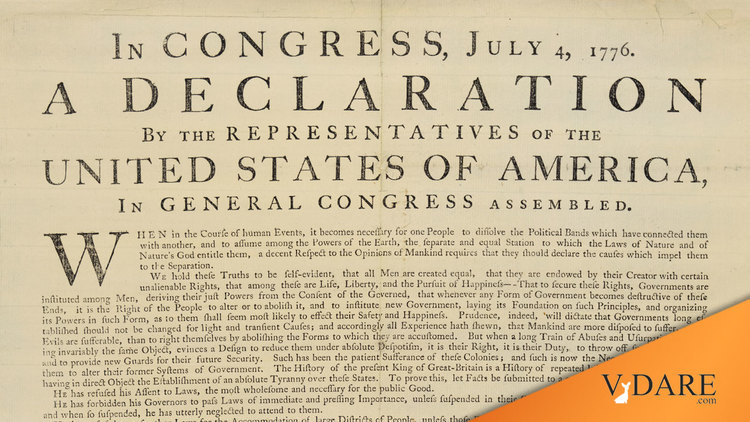 On this Independence Day, it behooves us to recall the principles of America's founding, especially in light of the ongoing attempt by today's political and commercial leaders to merge the United States into a hemispheric government.

In fact, the clarion call for independence is just as fundamental, just as revolutionary as it was 231 years ago. Regarding the signing of the Declaration of Independence John Adams said, "[Independence Day] will be the most memorable epoch in the history of America. I am apt to believe that it will be celebrated by succeeding generations as the great anniversary festival. It ought to be commemorated as the Day of Deliverance by solemn acts of devotion to God Almighty. It ought to be solemnized with pomp and parade, with shows, games, sports, guns, bells, bonfires and illuminations, from one end of this continent to the other, from this time forward forevermore." Adams went on to say, "You will think me transported with enthusiasm, but I am not. I am well aware of the toil and blood and treasure that it will cost us to maintain this Declaration, and support and defend these States. Yet through all the gloom I can see the rays of ravishing light and glory; I can see that the end is more than worth all the means, that posterity will triumph in that day's transaction, even though we should rue it, which I trust in God we shall not."

Indeed, the signers of America's Declaration of Independence endured the sacrifice of toil and blood.

Pertaining to the lives of the signers, David Limbaugh writes, "Of those 56 who signed the Declaration of Independence, nine died of wounds or hardships during the war. Five were captured and imprisoned, in each case with brutal treatment. Several lost wives, sons or entire families. One lost his thirteen children. Two wives were brutally treated. All were at one time or another the victims of manhunts and driven from their homes. Twelve signers had their homes completely burned. Seventeen lost everything they owned."

Yes, America's Declaration of Independence, which is our nation's birth certificate, was purchased at a very high price. Rightly did its primary author, Thomas Jefferson, invoke God's name no less than four times in the Declaration. Without God, our struggle for independence and freedom would have surely failed! Jefferson, along with the vast majority of America's founders, knew that freedom was first the gift of God, not the accomplishment of men.

He further understood that man's law must be subordinate to the natural laws of God. Therefore, with an appeal to Heaven for the "rectitude of [their] intentions," America's Founding Fathers courageously forged a document that would put their own lives at risk, but would also change the course of history. The question now is, "How long can we maintain our nation's independence?" The forces of global government seem to dominate both major parties in Washington, D.C., most corporate boardrooms, and most newsrooms (including the Fox News Channel). In fact, hemispheric or regional government never had a more powerful and committed ally than President George W. Bush. Mark my words, if and when America loses its independence, it will have been G.W. Bush that led the way in making it happen. I will even be so bold as to say that G.W. Bush is the worst enemy American independence has had since old King George III of England!

Even as I write, Bush is pushing forward with his intentions to merge the United States into a trilateral government with Mexico and Canada. This is why he lobbied so intently for the just-defeated amnesty bill for illegal aliens. To George W. Bush, there is no such thing as an illegal alien, because he has already agreed to unite the three countries into one. If the United States is going to maintain its independence and freedom much beyond the year 2010 (the year Bush's new North American Union is scheduled to be in place), it will only be because millions of freedom-loving Americans are willing to fight for it. Both John Adams and Thomas Jefferson died on July 4, 1826. Daniel Webster gave the eulogy for both men on August 2. Included in his remarks on that notable day were these words: "It [the Declaration of Independence] is my living sentiment, and by the blessing of God, it shall be my dying sentiment. Independence now, and independence forever."

To Webster's words, I say a hearty AMEN! I promise no loyalty to the North American Union, to the United Nations, or to any other brand of global government. When the day comes that I am required to submit to any form of global authority, I will be an outlaw! There is no freedom without independence, and there is no independence without eternal vigilance. To my dying breath I will say with Daniel Webster, "Independence now, and independence forever!"