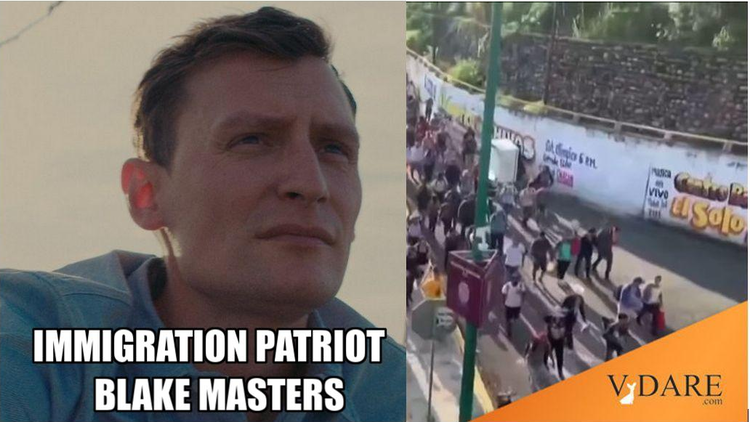 Immigration Has Democrats On Defense But They’re Still Plotting Amnesty. Why Doesn’t GOP Call Them Out?

When even radicalized Democrats are sounding retreat on the immigration issue, that should be a sign the GOP/GAP should attack. But national GOP “leaders” are, as usual, missing in action.

Unfortunately, the national GOP has vacillated about supporting the underfunded Masters. And it doesn’t have a coherent message on immigration, even though the Biden Regime is reportedly preparing a Lame Duck Amnesty drive. The GOP can and should have turned the midterms into a referendum on this single issue.

Masters’ immigration focus is letting him close the gap in what was once seen as an unwinnable race, despite Mitch McConnell having essentially cut him off [Scoop: McConnell-aligned super PAC pulls out of Arizona, by Josh Kraushaar, Axios, September 20, 2022]. (President Trump recently attacked McConnell for this, pointing out that, in contrast, he is spending money that should have been spent in the general election to support Alaska RINO Senator Lisa Murkowski in her primary [Trump slams McConnell over lack of funding for Masters in Arizona, by Chloe Folmar, MSNBC, October 10, 2022].). Masters still trails (and has always trailed), but the deficit has significantly fallen [Battle for Senate majority remains a nail-biter, by Steven Shepard, Politico, October 9, 2022]. RealClearPolitics has moved the race to “Toss Up.” And there are signs the national GOP might be finally coming home [GOP renews backing for Arizona Senate candidate Blake Masters, by Natalie Allison, Politico, October 6, 2022].

In their debate, Masters put Kelly in full retreat. The incumbent senator claimed that he pushed back against President Biden “when the president decided he was going to do something dumb,” namely ending Title 42, which allowed the U.S. to turn away “asylum-seekers” [Kelly breaks with Biden over ‘dumb’ decision on immigration in heated Arizona Senate debate, by Allan Smith and Sahil Kapur, NBC, October 6, 2022]. Masters’ killer comeback: “If that’s the best you can do, I respectfully request that you resign”  [Sen. Mark Kelly burned in debate, distances himself from Democrats’ responsibility for border chaos, by Joseph Clark, Washington Times, October 7, 2022].

MARK KELLY: "I've been focused on the border since day one."

BLAKE MASTERS: "We have a wide open southern border, so if that's the best you can do, I respectfully request you resign." 🔥

In Nevada, the situation looks even better for the Republicans, with incumbent Democratic Senator Catherine Cortez Masto losing to Adam Laxalt [Cortez Masto trails in poll of key Nevada Senate race, by Julia Shapero, The Hill, October 6, 2022]. At the least, this will force Democrats to spend money defending a seat that should be safe.

But, as in Arizona, the Democrats enjoy a massive cash advantage, and Laxalt, unlike Masters, is running a standard, even boring, party-line GOP campaign [How Nevada could doom Democrats’ hopes of holding Senate, by Andrew Romano, AOL, September 27, 2022]. Essentially, Laxalt is gambling that the standard midterm advantage for the opposition party plus inflation will be enough him to make it over the finish line. With the recent awful CPI numbers and the decision by OPEC and  OPEC+ to slash production, that might be enough [How Will OPEC’s Oil Production Cuts Affect Gas Prices And Inflation, by David McHugh, 4NewYork, October 7, 2022]. Still, it’s not stopping the hysterical charges that this eminently conventional candidate is somehow a threat to democracy itself [Laxalt’s anti-democratic actions, rhetoric disqualify him from elected office, Editorial, Las  Vegas Sun, September 22, 2021].

Of course, the best way to counter such artificial controversies is to put the immigration issue front-and-center. Whatever the merits of Gov. Ron DeSantis and his tactic of sending migrants to Martha’s Vineyard, it did that. Hence New York City Mayor Eric Adams declared a “state of emergency” because apparently Gotham can’t handle all the illegal immigrants that are being sent its way [New York declares state of emergency to respond to immigration crisis collapsing its asylum system, by Daniel Stewart, MSN, October 7, 2022]. “We have not asked for this,” said Mayor Adams [Transcript: Mayor Eric Adams Declares Asylum Seeker State of Emergency, Calls for Urgent Aid From Federal, State Governments, New York City Website, October 7, 2022]. Well, they kind of did. New York is a Sanctuary City. Besides, El Paso, run by Democrats, sends more migrants to New York City than does Governor Greg Abbott [Dem Mayor of El Paso Oscar Leeser sends twice as many migrants to NYC as Texas Gov. Greg Abbott, by Bernadette Hogan and Bruce Golding, New York Post, October 6, 2022]. And if Diversity is Strength and illegal immigrants grow the economy, how can there possibly be a “crisis?” [Adams drifts to a political island as New York’s migrant crisis grows, by Sally Goldenberg, Politico, October 7, 2022].

The potential political benefits for patriots are obvious. A New York Times / Siena College poll released in September found a majority of voters agree with Republicans on “undocumented immigration” [Slim Majority of Voters Agree With Republicans on Undocumented Immigration, by Zoe Strozewski, Newsweek, September 16, 2022]. According to a Deseret News / HarrisX poll, voters concerned about immigration, crime, and Political Correctness side with Republicans [Which issues help Democrats and Republicans the most? New national poll has answers, by Suzanne Bates, DeseretNews, October 6, 2022]. A separate Reuters/Ipsos poll had similar findings. Republicans enjoy an eight point advantage as the party trusted to confront immigration, and a nine point advantage on crime [Republicans have edge on crime, immigration ahead of U.S. midterms – Reuters/Ipsos poll, by Ted Hesson, David Morgan, and Jason Lange, Reuters, October 5, 2022].

These two issues are also connected. One example: the stabbing spree in Las Vegas that killed two, committed by an illegal immigrant who already had a criminal record in California [Las Vegas Strip stabbing: What we know about the suspect reportedly with California criminal record, by Koco McAboy, Fox11 Los Angeles, October 7, 2022]. A sane country would have already deported him.

The immigration issue is also going to have increased salience, as the 5th Circuit Court of Appeals ruled the Deferred Action for Childhood Arrivals (DACA) policy must be reviewed again by a lower court [An appeals court rules against DACA, but the program continues – for now, NPR, October 5, 2022].

Of course, many Republicans are taking a lackadaisical approach. Maryland Governor Larry Hogan, probably the Never Trumpers pick for the GOP nomination in 2024, has accused those who are busing migrants of not having a “serious discussion or a good solution” [GOP Gov. Larry Hogan called Republican governors DeSantis and Abbott busing migrants a ‘terrible idea’ and a stunt to ‘get on TV,’ by Katie Balevic, Yahoo News, October 9, 2022]. Yet the border is broken now and drawing attention is necessary before any solution can be offered.

Dr. Mehmet Oz has somehow managed to fall behind Pennsylvania Democrat and Lt. Governor John Fetterman in his Senate race on immigration, crime and even the economy, despite voter disapproval of President Biden. Oz’s campaign has seemed listless and cowardly [Voters trust John Fetterman over Dr. Oz on the economy, crime, and immigration: poll, by Aubrie Spady, Fox News, October 5, 2022].

In New York itself, GOP Richmond County chairman Rep. Michael Tannousis has decided that “fear how changing demographics will affect our city’s political landscape” should be ignored in favor of preaching “Republican values” [Staten Island GOP Assembly member’s message to party: Embrace legal immigrants, by Lauren Lovallo, SILIVE.com, October 8, 2022]. But what are those values other than bland platitudes about “growth” or “opportunity?”

The GOP will need an answer soon. The Democrats are preparing an existential challenge that will force the Republicans to get specific. The Biden Administration is readying another amnesty push [The White House is discussing a push around immigration – after the midterms, by Mike Memoli, Peter Nicholas, and Carol E. Lee, NBC News, October 4, 2022]. The reason why it is after the midterms is because Democrats now are too afraid of the issue and know support for Amnesty is a political death sentence [Democrats in tight races won’t say if they oppose amnesty for illegal immigrants, by Aubrie Spady, Fox News, September 20, 2022].

The solution is obvious. Force opposing candidates to go on the record on this single issue. Turn the midterms into a referendum on Amnesty. Highlight the current chaos on the border [With record arrests at the border, immigration a political flashpoint before election, by Gary Martin, Las Vegas Review-Journal, September 30, 2022]. Even fiscal conservatives should seize on the issue, with a recent study showing illegal immigration after President Trump was deposed costs us billions of dollars every year [Illegal immigrants who entered US since Biden took office to cost taxpayers $20+ billion a year: analysis, by Adam Shaw, Fox News, September 13, 2022].

The Democrats are on the defensive. The question is simple. Amnesty, yes or no? More directly, America’s survival, yes or no?

If the GOP can’t focus on that central point when the Democrats are desperately trying to hide, they deserve to lose these elections.

But American patriots don’t deserve to lose our country.

James Kirkpatrick [Email him | Tweet him @VDAREJamesK] is a Beltway veteran and a refugee from Conservatism Inc. His latest book is Conservatism Inc.: The Battle for the American Right. Read VDARE.com Editor Peter Brimelow’s Preface here.