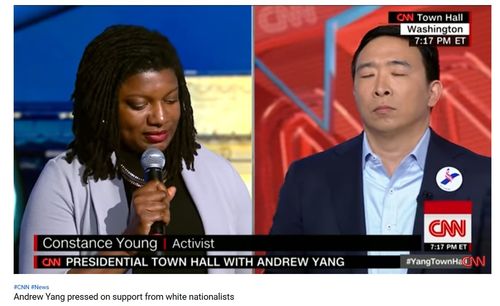 A Reader Has Questions About A Black Activist “Survivor” Of Charlottesville

From: A Reader [Email him]

While watching Andrew Yang's town hall on CNN, I saw a woman named Constance Young refers to herself as "a survivor of the Charlottesville car attack." (See the clip below.)

I followed the Fields story, but I never heard of Constance Young, and so her appearance made me curious enough to do a search for her name.

"Constance Young, an organizer with the Shut It Down DC activist group, had travelled to Charlottesville with an interfaith group."['Unite the Right': DC braces for far-right rally, counterprotests, by Patrick Strickland & Laurin-Whitney Gottbrath, August 11, 2018]

It is unclear to me whether Shut it Down DC is the "interfaith group" that the article alludes to, but regardless, Young's apparently significant role in a group named "Shut it Down" does not incline me to believe that she was a peaceful protester. According to the group's website, they follow a set of rules called the St. Paul Principles, which include this statement:

"Our solidarity will be based on respect for a diversity of tactics and the plans of other groups. […] We agree not to assist law enforcement actions against activists and others."

It sounds like Shut it Down DC is saying that they tolerate violence, but they don't tolerate reporting violence to the police.

I did a search for "St. Paul Principles," and it looks like they come from efforts to “shut down” the 2008 Republican National Convention in St. Paul, Minnesota. [RNC Strategy: Swarm, Seize, Stay / Sectors / Three-Tier Strategy / St. Paul Principles, Indybay.org,  reposted from noNRC.org,  July 24th, 2008]

I do not know if Constance Young has committed or officially endorsed violence, but she has a significant role in an organization that openly facilitates violence, and this organization follows a set of rules that were devised for the specific purpose of forcibly preventing a peaceful gathering. I don't know anything more about the legal system than what Hollywood puts in their courtroom dramas, but shouldn't this have come up in the James Fields trial?

James Fulford writes: I find it annoying that people say that they're "survivors" of things that never put them in any danger whatsoever. The man who's written articles here under the name of "Charlottesville Survivor" was in much more danger, because while the "Unite The Right" protesters had come for a genuinely peaceful protest, if allowed, all the "counter-protesters" had come to shut them down by force.