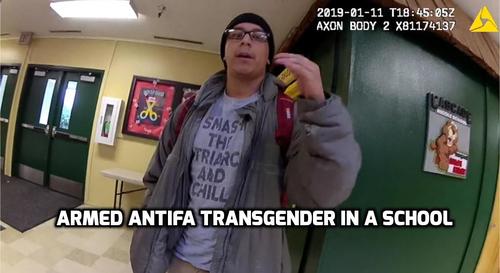 Fundamental Contradiction: Will Feminists Submit To Domination By Transsexuals?

Transsexuals are busting out all over—not surprisingly, since most of them are male-to-female and, as I showed a while ago, are actually very high testosterone men. Thus Charles Landeros (above) the Portland, Oregon Antifa leader recently killed in a wild January 11 school house brawl with police, was a transsexual who identified as “they” (and also an immigrant). [Fatal police shooting in front of Cascade Middle School was justified, DA rules, by Christian Hill, January 24, 2019]  But in promoting “Trans rights”—including the dogma that a “Trans woman” is just as much a female as, well, a female—the Left may have fallen afoul of what Marxists call a “fundamental  contradiction.” “Trans women” are inevitably going to triumph over real women in sport, politics, or any other area of life where they are accepted to be female. Will real women—feminists in particular—submit to this?

Part of the problem: Leftist have a schizophrenic attitude towards “gender.” When it suits them, “gender” is biological. Thus it was recently reported in Britain’s Leftist Independent that “girls” have a genetic “biological survival advantage,” however this can somehow be reduced by “sexism” .  [Sexism cancelling out girls’ inbuilt biological survival advantage, child mortality study suggests, by Maya Oppenheim, Independent, October 31, 2018] Consistent with this biological view, women compete separately for most sports and there is “Positive Discrimination” a.k.a. Affirmative Action in their favour in “male dominated” areas such as politics, where Britain’s Labour Party now operate a system of “All Women Shortlists” for those who want to be adopted as a parliamentary candidate for certain winnable constituencies (= congressional districts).

But, at the same time, the Left claims gender is a social construct—that a man who mutilates his body, or simply announces he is a woman, is just as much a “woman” as someone with two X chromosomes. And anyone who disagrees provokes totalitarian “outrage” .  [Jenni Murray: trans women shouldn't call themselves “real women” Presenter of BBC Radio 4’s Woman’s Hour sparks outrage with article on transgender women in Sunday Times magazine, by Maev Kennedy, The Guardian, March 5, 2017, ]

This anxiety-inducing cognitive dissonance—where, like Alice Through the Looking Glass’s Red Queen, you must believe something you know is impossible—probably goes a long way to explaining the highly emotional reactions that critics of the “Trans Lobby” are subject to.

Writing in Barb Wire, Dr Michael Brown has drawn attention to way in which the non-Cis community, and their virtual-signalling groupies, are now targeting scientists. [More Evidence that the Transgender Revolution Will Fail, October 24, 2018]

Despite what transgender people may claim about being “a woman in a man’s body” or vice versa, the reality is that, in most cases, they suffer from gender dysphoria, normally around the time of puberty. A study in the leading journal PLOS ONE—researched by a female, Lisa Littman—found that many cases of gender dysphoria seemed to have environmental causes, such as exposure to certain ideas online, something especially true of teenage girl sufferers. [Rapid-onset gender dysphoria in adolescents and young adults: A study of parental reports, August 18, 2018 ]. This, along with the rapidity with which transgenderism and being “non-binary” has become fashionable among teenage girls, would imply that, as Steve Sailer has argued, it is a kind of communal hysteria akin to anorexia.

The sufferers are very similar: educated-background, white, and academically gifted, with the add-on that they’ve expressed confusion over their sexuality prior to deciding they are “transgender”. In other words, they’re going through a—likely passing—phase of homosexual feelings which they decide means they are transgender.

In line with this, Littman found that 80% of these girls were in no way inclined to dress in opposite sex until puberty, in stark contrast to “traditional” transgender people.

But Littman’s Brown University, under pressure from the Trans Lobby, removed the study from its website. Brown’s bogus claims about quality concerns were revealed as spurious simply by the peer-reviewed nature of the journal where it was published. Over 100 academics have signed a petition protesting against this insanity, weathering SJW calls for their dismissal in the process. Unlike racial minorities, transsexuals are too small a group to be allowed to dictate what can be researched for very long.

In line with Sailer’s hysteria hypotheses, only 0.58% of Americans claim to be transgender. But among younger cohorts its as much as 3%, with 20% of millennials claiming to be LGBTQ compared to 12% of the population [How big is the transgender population, really?, Ana Valens, The Daily Dot, June 14, 2017]

But it is male-to-female transgenderism that seems to have more serious implications. Most transsexuals, who actually make serious changes to themselves, are biologically male.  [Mortality and morbidity in transsexual subjects treated with cross-sex hormones, by P. Van Kesteren et al., Journal of Clinical Endocrinology, 1997]

It is here that the SJWs have shot themselves in the foot.

Many people like watching sports, meaning that the Trans Lobby can expect a very strong negative reaction to any attempt to interfere with that. But this is exactly what they are doing. A biological man was recently allowed to compete in—and, of course, won—the UCI Track Cycling World Championship. The woman—a real woman—who came third had the courage, unlike the organizers, to declare that this “completely unfair”. [“Not fair”: World cycling bronze medalist cries foul after transgender woman wins gold, by Caleb Park, Fox News, October, 19 2018]

In Connecticut, a boy who had previously competed as a boy was permitted to compete as a girl in a sprint championship and, of course, nearly won—losing to another Trans woman. [Students and parents demand 'unfair rule' change after two transgender teen sprinters come first AND second in the girl's state championship, months after one competed as a boy, by Minyvonne Burke, Mail Online, June 12, 2018]

For SJWs, it is especially ominous that it is women, very much a protected group in contemporary culture, who are becoming unhappy.

And women should be unhappy. Pressure from the Trans lobby means that they are now far less safe. It emerged in the UK in July that a pre-op transsexual man decided to “identify as female,” allowing him to be placed in women’s prison in Wakefield in Yorkshire in the Northeast of England. Within days of his arrival, this man, who had been “living as a woman for two years” had sexually assaulted four women inmates, with one of them distinctly recalling that she could see his (or should that be “her”?) “erect penis” during her ordeal [Transgender prisoner who was put in a female jail despite not having sex-change surgery “sexually assaulted four women inmates before being moved to a male prison”, by Rod Ardehali, Mail Online, July 18, 2018]

Women, it appears, don’t especially like mentally unstable men watching them get undressed and exposing themselves to them. Yet, in Florida just such a man—who “identified as a woman”—was permitted to use the female changing rooms of a gym and expose himself to the females [Planet Fitness bans woman for objecting to sharing locker room with “transgender” man, by Doug Mainwaring, Life Site, July 16, 2018]

However, when a pupils at the girls’ private school St Paul’s in London decided to “identify as a male,” rather than expel them at once for no longer being females at an exclusively girls’ school, they were allowed to wear a boys’ version of the school uniform. [Top London girls school allows pupils to identify as male or gender neutral, by Rachel Pells, Independent, February 20, 2017] One might think that a genuine “boy” would be unhappy at an all-girls school.

This showdown within the Left has already begun. The letters page of Britain’s Communist newspaper The Morning Star—for which, significantly, the country’s Labour Leader of the Opposition, Jeremy Corbyn, used to write—has played host to an acrimonious debate between Labour-supporting feminists who think that “All-Women Shortlists” should be exclusively for biological women and the even more unpleasant Leftists who insist they should be open to biological men who claim they are women. The latter camp have also demanded that the Morning Star shouldn’t even publish letters by Feminists who demand that the shortlists remain feminine [Morning Star Readers Against Transphobia], because these “Feminists” are manifestly “Enemies of the People.”

Feminists are right to concerned. The SJWs who dominate the Labour Party will gladly adopt a “trans woman” if they have the chance—and he’ll likely have the aggression and drive of a man, making him more suited to politics anyway.

Poor Britain’s only hope is that voters have enough sense not to elect a “trans woman,” intuiting that such people are mentally ill. Transgenderism does correlate with depression, anxiety and many other psychological problems. [Review and theory of handedness, birth order, and homosexuality in men, by Ray Blanchard, Laterality, 2008] Indeed, it seems to be a reflection of these pathologies. The sex change does very little to alleviate the propensity towards depression suffered by transgender people. Their rates of depression are double those of “cisgender” people [Beyond Depression and Suicide: The Mental Health of Transgender College Students, by S. Oswalt and A. Lederer, Social Sciences, 2017].

Significantly, the majority of male-to-female transsexuals claim to be lesbians [Sexual Orientation Identities, Attractions, and Practices of Female-to-Male Transsexuals, by H. Devor, Journal of Sex Research, 1993]. This obviously wouldn’t be the case if they really were females born into the wrong body.

And there is a growing problem of transsexuals deeply regretting what they’ve done to themselves and even having reversal operations. Decades ago, the stigma attached to transsexuality meant that some depressed teens would go through a phase of questioning their gender, but it would pass. Now, they are encouraged to act upon it, to believe they are “normal”, and to pump themselves full of hormones which can lead to serious physical conditions and even elevate their suicide-proneness. [Hormone therapy linked to dangerous health issues in trans women, by Gwendolyn Smith, LGBQ Nation, July 14, 2018]

It may well be that the Virtue Signallers have gone too far this time. In this case, we are not being told to believe that “Black is equal to White” but that “Black IS White.” And, crucially, it among women, another “protected group”, that we are seeing a backlash.

For Britain’s Labour Party, it could well result in their losing seats in parliament, as a “trans woman” is adopted for a safe Labour constituency only to be shunned by its white working class or, increasingly, Muslim voters.