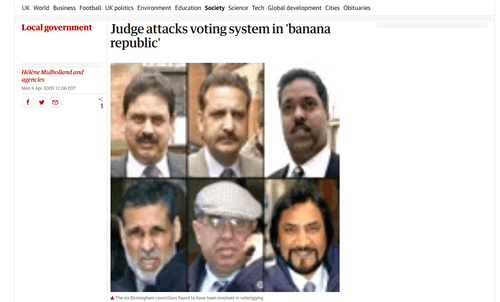 We Have Trained Ourselves To Always Ask "What Color" Corrupt Politician, Because If They're NOT White, It Won't Be Mentioned 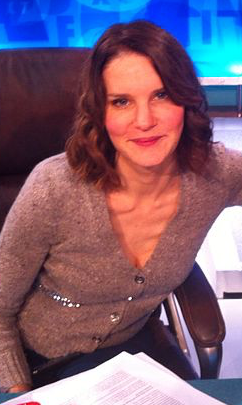 So I'm trying to relax and not think about race, crime, and immigration by reading Fanboys and Overdogs: The Language Report, a 2005 book about  interesting words by Susie Dent, the charming English lexicographer who not only writes books of words, but is a regular on the British comedy show 8 Out of 10 Cats Does Countdown, when I come across this:

Meanwhile, electoral fraud became a dominating theme. In Birmingham, six Labour councillors were found guilty of running the most corrupt electoral campaign in Britain for well over a hundred years. Over 3,000 postal votes were 'stolen' or amended in favour of the Labour Party, leading the British press to question the integrity of the entire election. In the verdict of the judge, the scandal of Birmingham's local election involved 'electoral fraud that would disgrace a banana republic'. Banana republic, a term dating back to 1935, was resurrected on several occasions in the course of subsequent election debates.

At this point I have to stop reading, take my iPad, and try and find out the answer to the question "What color are these Labour councillors?"

Those two wards in the formerly British city of Birmingham have white British populations of, respectively, 26 and 25 percent. One of them is 35 percent foreign born.

If I hadn't spent years looking things like this up, I would have assumed they were corrupt white British politicians, like the characters in a Michael Gilbert novel.

By the way, if the 2005 election was the most corrupt in 100 years, it's worth noting that in 1905, the white British population of the city was approximately 100 percent.