Even before the grand jury dares to  admit whether or not it wants to railroad police office Darren Wilson, the St. Louis area seems on the brink of racial chaos. After a black man was shot and killed by a police officer on Wednesday, October 8 (the “victim” reportedly fired three shots at the officer—just another day in the barely controlled anarchy that characterizes America’s black neighborhoods) protesters responded, significantly, by burning American flags. [Unrest in St. Louis After Police Officer Shoots, Kills Man, ABC News, October 9, 2014] Ominously, mau-mauing is working: the Main Stream Media/ Obama Regime’s witch-hunt has already terrified the authorities responsible for maintaining what civilization into sacrificing several white police officers. They are the “Invisible Victims” of the Ferguson farce. 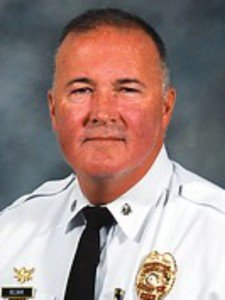 The key figure now: Chief Jon Belmar of St. Louis County, who has been meeting with other jittery Missouri police chiefs three times a week, drawing up contingency plans for the Fire Next Time. [Missouri Police Plan for Possible Riots if Brown Cop Not Charged by Reuters, Newsweek, October 7, 2014, at 3:00 P.M.]

Belmar appeaars afraid of meeting the fate of his Ferguson counterpart, Chief Thomas Jackson. On August 14, after several nights of rioting, in a move of dubious legality, white, liberal Democrat Gov. Jay Nixon removed Chief Jackson from local command, and replaced him with black Missouri State Highway Patrol Capt. Ronald Johnson. (The weight given to the racial symbolism can be judged by the replacement of a chief by a lower ranking captain).

The result was catastrophic. On Day One, Capt. Johnson marched side-by-side, in uniform, with uniformed members of the racist Bloods street gang. No blacks rioted or disrespected him, and the MSM lionized him.] He apologized to and posed for photographs with black demonstrators, which sent the clear message to the rioters and potential jurors that he thought that Officer Wilson was a murderer, and that failed, would-be cop-killer Mike Brown was an angelic martyr to racism.

A veteran Midwestern lawman recounted to me how, after the subsequent riots, reporters asked Capt. Johnson about how many wounded policemen and destroyed police vehicles there were. Johnson waved them off with, “I don’t want to get into little details.” My source asked, flabbergasted, “At what point did that become negligible?!”

In an age of anarcho-tyranny, Capt. Ronald Johnson was the perfect “counter-policeman.” Instead of imposing order on criminals, he imposes the rule of crime and anarchy on the law-abiding. Even after Johnson’s failure, when he was quietly replaced by Col. Ron Replogle, the MSM acted like Jonson was still in charge. [Jay Nixon: National Guard to Ferguson by Jonathan Topaz, Politico, August 18, 2014.]

What happened in Ferguson fits the larger pattern of what is happening in Missouri. White cops are being removed from the service for being an obstacle to our hostile elite’s de facto support of the rioters. [Three Missouri police officers out of jobs in wake of Ferguson protests by Nina Golgowski, Meg Wagner, Corky Siemaszko, New York Daily News, August 29, 2014.]

Which, of course, only emboldened further demands.

So far, four white policemen who either served during Ferguson’s riots or commented on them on Facebook have been fired or forced to resign.

Lemon then sought revenge against Sgt. Page. Someone at CNN found a video of Page addressing a group of Oath Keepers, devout, politically conservative Christians. Page claimed to have been an Army command sergeant major and Green Beret, and to have killed a lot of men in battle. [Sgt. Maj. Page to St. Louis Oath Keepers: The End of American Sovereignty & Constitutional Rights by thenewsurvivalist, Youtube, April 23, 2014.]

I have listened to the video. I thought Page came off as a blowhard and a braggart. But he still is protected by the First Amendment.

However, the MSM engaged in a deliberate effort to destroy him. For example, Daily News “reporter” Sasha Goldstein emphasized that Lemon was black, and insinuated that Sgt. Page had no right to enforce the law where blacks were concerned. Goldstein also mischaracterized Page’s comments as focusing primarily on race, when it was actually more of the “conspiracy theory” type rhetoric that is accepted as mainstream among blacks. [St. Louis County cop suspended when racist, sexist rant goes viral after patrolling unrest in Ferguson, Mo., by Sasha Goldstein, New York Daily News, August 22, 2014]

Meanwhile, MSNBC was shocked, shocked to learn that Sgt. Page will be getting his full pension. [Cop who threatened to ‘kill everybody’ expected to get full pension by Collier Meyerson, MSNBC, August 29, 2014.]

Apparently, any speech that disagrees with racial socialism is “hate speech,” and should result in the speaker being fired, losing any pension he has earned, and being prosecuted.

Unfortunately, this clearly cowed Sgt. Page’s boss, St. Louis County Chief Jon Belmar. He denounced and suspended Page on August 22, and pulled a page out of the old Soviet playbook by insisting that Sgt. Page get “psychological counseling.”

As the Elgin Courier-News reported,

Elgin Police Officer Jason Lentz was fired Monday over controversial posts on his personal Facebook account that could be considered racist [N.S.: By whom?].

In one of those posts, Lentz said that the Ferguson, Mo., police officer who shot and killed a young man last month “did society a favor.”

Police department leaders had placed Lentz on administrative leave Aug. 26 after the social media postings were pointed out by another Elgin officer.

An AP operative seemed to feel that the case for firing Officer Lentz was bolstered by a statement Lentz had made that was less than submissive towards Islam, and by one putting Veterans Day on a par with Martin Luther King Jr. Day. [Elgin police officer fired due to Facebook comment, Associated Press/ABC News, September 30, 2014.]

But already around that time, Chief Jackson had promised to hire more black officers—which conceded both that he had previously been guilty of racial discrimination, and that the local black felons were burning down stores as their way of saying, “Hire more black cops!”

Since then, Chief Jackson has only gotten worse, and has thrown not only Officer Wilson, but every white cop in his department under the bus.

On September 25, in an abomination of obsequiousness, he made a propaganda video scripted and shot by the PR firm, Devin James Group, in which he apologized to the would-be cop-killer’s family and supporters for leaving the perp’s corpse lying in the street for over four hours.

As I pointed previously, Brown’s corpse could not be moved, because the racist black mob was firing shots, and threatening the lives of the white personnel there to move it.

"I'm truly sorry for the loss of your son. I'm also sorry that it took so long to remove Michael from the street… You have every right to be angry and upset….” [Ferguson police chief issues apology to Brown family by Christina Coleman and Greg Toppo, USA TODAY, September 25, 2014.]

Is Chief Jackson saying that he wishes Mike Brown had succeeded in murdering a decorated white policeman? That is the logical consequence of his statement.

Needless to say, Brown’s parents responded to Chief Jackson’s groveling by demanding his dismissal, and yet again demanding the arrest of their son’s victim for murder. Chief Jackson refused to resign. [Michael Brown's Parents Unmoved by Ferguson Chief's Apology by the Associated Press, NBC News, September 27, 2014.]

The night Chief Jackson released his apology video, he tried to make nice with the “demonstrators” calling for his resignation in a march to Ferguson police headquarters, by marching with them, like Capt. Johnson, but in civilian clothes. But once they realized that Jackson was among them, they rioted, and cops had to rescue the chief who had betrayed them. Media operatives asserted that it was Jackson’s presence that provoked the riot—as opposed to all the riots where he had not been present. [Ferguson police chief marches with protesters calling for his resignation; aggravated crowd turns violentby Meg Wagner andJason Molinet, New York Daily News, September 26, 2014.]

When white Ferguson cops started wearing wristbands saying, “I am Darren Wilson” Eric “My People” Holder’s DOJ ordered him Jackson to make his men doff the wristbands. Chief Jackson could have told the DOJ to go to hell, but instead submitted. [Feds Tells [sic] Ferguson Police to Ban 'I Am Darren Wilson' Bracelets by M. Alex Johnson, NBC News, September 26th 2014.]

The fruits of appeasement are becoming clear. Chief Belmar of St. Louis should learn from Chief Jackson of Ferguson’s failure. There’s only one way to deal with these riots – ruthless coercion.