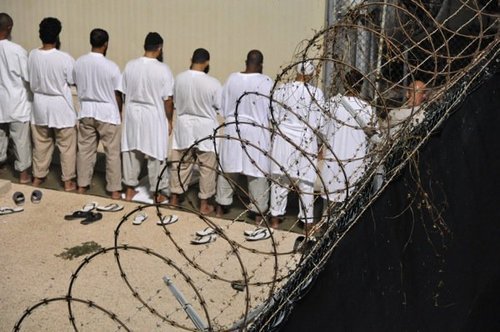 No Means No: Keep Gitmo Jihadists Out of U.S.A.

Get off that late-summer snooze button, America. The Obama administration is plotting to break a major promise made under oath—and jeopardize our nation in the name of social justice.

This week, top White House officials floated renewed plans to close down Guantanamo Bay in Cuba. Pentagon and Justice Department bureaucrats have been powwowing over how to shutter the facility and import up to hundreds of detained jihad suspects into the U.S. It's a longtime legacy promise President Obama wants to fulfill to progressives before he rides off permanently to Martha's Vineyard and Hawaii's lushest golf courses.

There's one teeny-tiny problem: the promise former Attorney General Eric Holder swore to Congress after the last time his stubborn boss tried to dump the detainees on American soil. Somehow, as they busied themselves with the nitty-gritty details of transferring Islamic enemy combatants to Gitmo North, key members of Team Obama suffered a disturbing bout of national security amnesia.

Let's refresh their leaky memories. In 2009, the White House first floated the idea of using the Thomson Correctional Center, a high-security prison in Illinois, to house Gitmo denizens. Family members of 9/11 victims, God bless them, raised a national uproar. Debra Burlingame, sister of American Airlines Flight 77 pilot Chic Burlingame, blasted the feckless president's assertion that no one would be put in danger by his Gitmo relocation program.

Citing convicted shoe bomber Richard Reid's successful push (backed by liberal ACLU lawyers) to proselytize about Islam at the supermax facility here in Colorado, where I live, Burlingame cut through the bullcrap. "Mr. Obama has repeatedly suggested that the security challenge of bringing more than 100 trained and dangerous terrorists onto U.S. soil can be solved by simply installing them in an impenetrable fortress. This view is either disingenuous or naive," she wrote.

"The militant Islamists at Guantanamo too dangerous to release believe that their resistance behind the wire is a continuation of holy war. There is every reason to believe they will continue their jihad once they have been transported to U.S. soil where certain federal judges have signaled a willingness to confer upon them even more rights."

And don't forget the legions of jihadi-lovin' lawyers out there ready, willing and able to abet them. Remember Lynne Stewart, who was convicted in 2005 of helping World Trade Center bombing mastermind terrorist Omar Abdel Rahman—the murderous Blind Sheik—smuggle coded messages of Islamic violence while behind bars to outside followers in violation of an explicit pledge to abide by her client's court-ordered isolation? The Obama administration released her from prison in January 2014, citing "compassion" for her health.

The breast cancer-surviving terrorist helper, who remains defiantly unapologetic about her service to jihad, is alive—and more than a year and half later has been happily kicking our country in the gut on the far-left America-bashing speech trail.

After citizens and public officials in Illinois, Michigan and Kansas (where another Gitmo North alternative, Fort Leavenworth, is located) staged vocal protests against Obama's sneaky plans three years ago, Rep. Frank Wolf, R-Va., chairman of the House appropriations subcommittee overseeing the Justice Department's budget, moved to block the administration from using unspent Justice Department funds for the Thomson deal. With bipartisan support, Congress passed a law barring the transfer of Gitmo detainees to Thomson or any other civilian prison.

As I reported at the time, the message was clear: Taxpayers don't want manipulative Gitmo detainees or their three-ring circuses of transnationalist sympathizers and left-wing lawyers on American soil. Period.

Insolent as ever, the White House went ahead and acquired Thomson for $165 million as part of its Gitmo gambit. The backlash forced Holder to vow to Capitol Hill in 2012: "We will not move people from Guantanamo, regardless of the state of the law, to Thomson. That is my pledge as attorney general."

And if you like your doctor, you can keep your doctor. This will be the most transparent administration in history. We will do whatever it takes to prevent Iran from producing an atomic bomb. Yadda, yadda, yadda.

For those who are awake now, I ask:

Do you want Gitmo jihadists in your backyard? Or your front yard?

Do you know what, if anything, your representatives in Washington are doing to ensure America's safety?