Ruth Bader Ginsburg recently opined that there will be only be enough women on the Supreme Court “when there are nine” [When will there be enough women on the Supreme Court? Justice Ginsburg answers that question, PBS NewsHour, February 5, 2015]. Significantly, Ginsburg’s fellow female justices Sonia Sotomayor and Elena Kagan joined recently in attempting to strike down the Texas voter ID law. Immigration patriots are going to have to confront the reality that their opponents are being driven by free-floating resentment, and, as Ginsburg suggests, will not be satisfied with anything less than total domination.

Ginsburg Does not Approve of Your Male Dominance 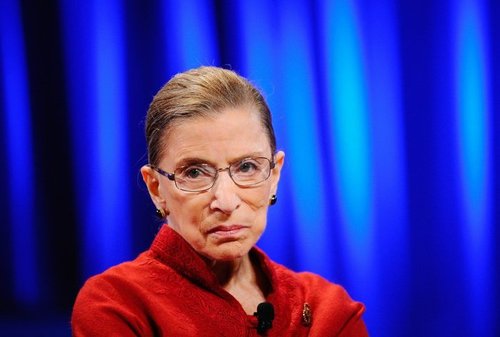 From 51 Seriously Badass Ladies Who Will Make You Proud To Be A Woman, by Ashley Perez, BuzzFeed, July 18, 2014.

From an objective point of view, it does not seem to make sense that respect for women’s rights would necessarily lead to support of mass immigration. After all, the Third World peoples colonizing the West hardly have enlightened views on female liberation.

In Rotherham, England, mass Muslim immigration enabled the sexual abuse and exploitation of the young women of the town with the silent collusion of local Labour council. Throughout Europe, Muslims sexually denigrate and rape white women, to the indifference of the national governments.

And the United States is no exception to this pattern. According to the findings of the Population Reference Bureau, the barbaric practice of female genital mutilation [FGM] is now a real concern here precisely because we have imported it.

FGM/C has gained attention in the United States in part because of the rising number of immigrants from countries where FGM/C is prevalent, especially sub-Saharan Africa. Between 2000 and 2013, the foreign-born population from Africa more than doubled, from 881,000 to 1.8 million.

[Women and Girls at Risk of Female Genital Mutilation/Cutting in the United States, by Mark Mather and Charlotte Feldman-Jacobs, Population Reference Bureau, February 2015]

Yet feminists are an important part of the coalition for mass immigration and Open Borders. Most official feminist organizations will even claim that pushing for an Amnesty/Immigration Surge is a “feminist issue”. [Immigration as a Feminist Issue, National Organization for Women, Accessed February 12, 2015] And unlike the cheap labor lobby Republicans who claim they want “workers” to help the economy, feminist rhetoric about immigration tends to revolve around the need for the U.S. to provide “high-quality social services” to these people who shouldn’t even be here in the first place [Is Immigration A “Women’s Issue?”, by Irin Carmon, Jezebel, May 5, 2010].

As Ginsburg implied with her demand for an all-female Supreme Court, the driving force behind contemporary feminism is resentment. This is also the primary motivation for other ethnic and minority grievances, with the Muslims being perhaps the most extreme example.

Conservatism, Inc. believes that its banal big tent will reel in the wretched of the earth. But as the Ginsburg demand makes clear, the Coalition of the Oppressed will not be satisfied with token gestures. Parity today doesn’t remedy yesterday’s evils.

And once you accept the progressives’ premise, the Left has it right. How can one generation of “equal opportunity” for women make up for centuries’ worth of women kept “barefoot and pregnant?” When you start with an expectation of equality, and a disdain for “male-dominated” society, then you logically end up where Ginsburg did.

The multicultural Left has been sharpening its knives for generations. They are waiting to “have the whip hand over the white man,” as Enoch Powell quoted a constituent saying in reference to blacks in England back in 1968. The multicultural Left has near-complete control over our entertainment and educational system, and its political power is verging on the tipping point, thanks to our treasonous immigration policy.

As the diverse, non-white people with high levels of illegitimacy increase in number, it will be easier for the traditional Left to foist the welfare state on the rest of us. The welfare state must expand and compensate for all of broken families and absent men who aren’t there to provide for their families. The single woman who needs government to compensate for family and provide for her is a natural feminist as well as a natural liberal. In fact, the single mother may be the most destabilizing element in American society- especially when they are carrying an “anchor” with them.

The Beltway Right’s economism has nothing to offer such a figure.

With mass immigration, you’ll get more female genital mutilation, but you’ll also get more advocates for the welfare state and cultural Marxism. And that’s a win for feminism, an ideology that actively depends on fostering resentment, conflict, and instability.

It’s not just the entitled minorities and their white liberal allies we need to worry about. Too many women, even some of the Republicans like Renee Ellmers, are easily led into corrosive, anti-male gender politics and the treason of Amnesty. There is no coincidence that Ellmers is appears obsessed with the “woman’s perspective” on issues, an obsession that leads her into idiocy like this:

[M]any of my male colleagues[in Congress], when they go to the House floor, you know, they’ve got some pie chart or graph behind them and they’re talking about trillions of dollars and, you know, how the debt is awful and, you know, we all agree with that… We need our male colleagues to understand that if you can bring it down to a woman’s level and what everything that she is balancing in her life – that’s the way to go.

Emotion, resentment, and jealousy can’t be the basis of a stable polity. But as our public debate is increasingly dominated by unstable “Social Justice Warriors” and professional victims, we can see that the logical endpoint is a dysfunctional society run by the perpetually aggrieved.

Immigration patriots need to understand that there can be no common ground with an opponent arguing in bad faith. We don’t just have a disagreement with Open Borders advocates on policy, we have no common interest in making the country better.

All the disparate tribes of the Left—from patriarchal Third Worlders to bisexual feminists—stand for Open Borders. They know it will make the United States less successful, less stable, and less free. That’s precisely why they need it so badly.