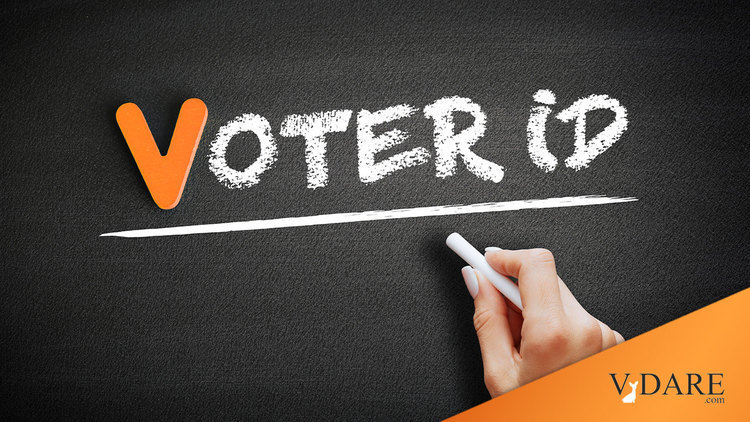 A federal judge struck down the  Texas Voter ID law (see here) , after that a Circuit Court panel upheld the law at least for this election (see here), and now the U.S. Supreme Court has ruled on the issue.  From Supreme Court allows Texas to enforce new voter ID law, sparking mixed reaction[Fox News, October 18, 2014]

In a rare weekend announcement, a majority of the high court’s justices rejected an emergency request from the Justice Department and civil rights groups to prohibit Texas from requiring voters to produce certain forms of photo ID to cast ballots. Three justices dissented.

The law was struck down by a federal judge last week, but a federal appeals court had put that ruling on hold.

The judge found that roughly 600,000 voters, many of them black or Latino, could be turned away at the polls because they lack acceptable identification. Early voting in Texas begins Monday.

"We are pleased the Supreme Court has agreed that Texas' voter ID law should remain in effect,” the state’s Attorney General’s Office said. “The state will continue to defend the voter ID law and remains confident that the district court's misguided ruling will be overturned on the merits.”

The high court’s order was unsigned, as it typically is in these situations. Justices Ruth Bader Ginsburg, Sonia Sotomayor and Elena Kagan dissented, saying they would have left the district court decision in place.

"The greatest threat to public confidence in elections in this case is the prospect of enforcing a purposefully discriminatory law, one that likely imposes an unconstitutional poll tax and risks denying the right to vote to hundreds of thousands of eligible voters," Ginsburg wrote in dissent.

"Discriminatory" law, "denying the right to vote".  Please.  Anybody who wants to vote can vote.  The only group of people this discriminates against are illegal voters, who should be discriminated against.

The law sets out seven forms of approved ID — a list that includes concealed handgun licenses but not college student IDs, which are accepted in other states with similar measures.

In the future, Texas might consider setting up a Mexican-style voter registry and just provide ID to all legal voters.

"Hundreds of thousands of eligible voters in Texas will (now) be unable to participate in November's election because Texas has erected an obstacle course designed to discourage voting,” said Sherrilyn Ifill, president and counsel for the NAACP’s Legal Defense Fund. “A federal court has found that the obstacles erected by Texas were designed to discriminate against black and Hispanic voters. This is an affront to our democracy. "

The 143-page opinion from U.S. District Judge Nelva Gonzales Ramos called the law an "unconstitutional burden on the right to vote" and the equivalent of a poll tax in finding that the Republican-led Texas Legislature purposely discriminated against minority voters in Texas.

Texas had urged the Supreme Court to let the state enforce voter ID at the polls in a court filing that took aim at the ruling by Ramos, an appointee of President Obama. Attorney General Greg Abbott, a Republican who's favored in the gubernatorial race, called Ramos' findings "preposterous" and accused the judge of ignoring evidence favorable to the state.

The defense fund, which is separate from the NAACP, presented testimony and oral arguments in the lower court trial.

“This battle isn’t yet over, said Natasha Korgaonkar, a lawyer for the group’s political arm.

Two years ago, the group and Justice Department joined other organizations in blocking the implementation of a photo-ID law in Texas.

The Supreme Court has ruled on other states' Voter ID laws:

The court had intervened in three other disputes in recent weeks over Republican-inspired restrictions on voting access. In Wisconsin, the justices blocked a voter ID law from being used in November. In North Carolina and Ohio, the justices allowed limits on same-day registration, early voting and provisional ballots to take or remain in effect.

Ginsburg said the Texas case was different from the clashes in North Carolina and Ohio because a federal judge held a full trial on the Texas election procedures and developed "an extensive record" finding the process discriminated against ballot access.

Texas has enforced its tough voter ID in elections since the Supreme Court in June 2013 effectively eliminated the heart of the Voting Rights Act, which had prevented Texas and eight other states with histories of discrimination from changing election laws without permission. Critics of the Texas measure, though, said the new ID requirement has not been used for an election for Congress and the Senate, or a high-turnout statewide election like the race for governor.

Ramos' issued her ruling on October 9. Five days later, the 5th U.S. Circuit Court of Appeals in New Orleans put her decision on hold and cited a 2006 Supreme Court opinion that warned judges not to change the rules too close to Election Day.

The challengers in Texas said that the last time the Supreme Court allowed a voting law to be used in a subsequent election after it had been found to be unconstitutional was in 1982. That case from Georgia involved an at-large election system that had been in existence since 1911.