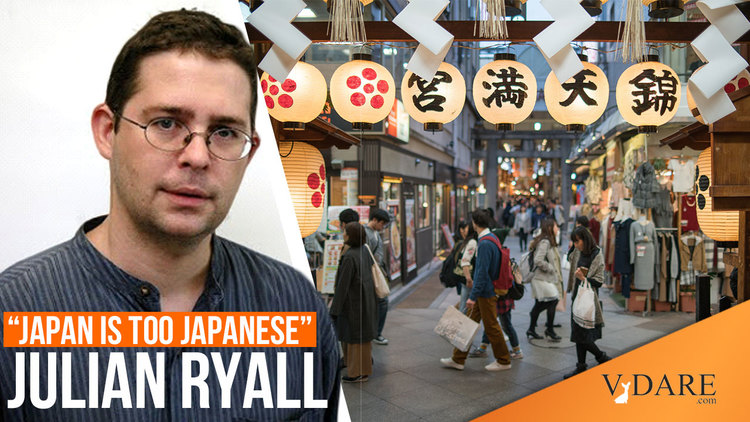 EXPEL THE BARBARIAN!—Why Does Japan Put Up With Expatriate Hack Julian Ryall, Who Campaigns To Destroy It With Mass Immigration?

Most people visit or move to Japan because the country and its people fascinate them, and they don’t judge them for being, well, Japanese. Not so with Julian Ryall a free-lancer, correspondent for The [UK] Telegraph and the South China Morning Post. Ryall thinks Japan is too Japanese. It has not adopted his enlightened views on race and immigration. While most of his work parrots Establishment bromides about the economy and the China conflict, he also writes something of a regular Two Minute Hate about the Japanese. They are, he clams, incorrigible racists. You’d think a man who has earned his daily rice bowl in the country for a quarter century would be a little more grateful. But alas, gratitude has never been a strong suit of the Leftist media.

Let’s leave aside Ryall’s departure from diverse, high-crime London for the monochrome, low-crime Yokohama just outside Tokyo, and what that says about his anti-racist bona fides. Let’s focus instead on his openly anti-Japanese journalism. Typically, Ryall doesn’t himself claim the Japanese are racists; he lets his interview subjects and headline writers do it for him.

This is typical: Why is racism so big in Japan? [SCMP, December 9, 2017]. The main source is an American expatriate named “Debito Arudou, a human-rights activist who was born David Schofill in California and became a naturalized Japanese citizen in 2000.”

Arudou was quite exercised that “most Japanese do not want to believe [racism] exists in their society because they have been told there is only one race in Japan.”

The Japanese are right to believe that. But Ryall and his American interlocutor expect Japan to adopt open borders and permit a mass influx of refugees:

And when the domestic media plays up violent incidents involving immigrants in France, Germany and Britain, it comes as no surprise that Japanese resist the idea of permitting foreigners to settle permanently in Japan, even when they are refugees seeking sanctuary from violence in their homelands.

“It is well known that Japan accepts a minuscule number of refugees each year and yes, the media here and the public at large look at the problems that have occurred in Europe and say those problems could never happen here because there are no immigrants,” Arudou says.

“They say this is a mono-culture where everyone understands each other. And while that is nationalist claptrap that completely ignores any crimes committed by Japanese, it is how they think. It’s the narrative they tell themselves to reassure each other. But it’s not an honest narrative.”

Another of Ryall’s hit pieces complained that Japan is “still racist” despite accepting foreign workers [Japan: now open to foreign workers, but still just as racist?, SCMP, May 11, 2019]. For that one, Ryall found a French expatriate to unload on the country that took him in:

“What can you do?” said Fior, 47. “Japan is such a polite country on the surface and everyone smiles and bows, but there are a lot of times when you get the sense that not far below the surface is the wish that us foreigners were just not here.”

The Japanese probably do wish that. And no one can blame them.

Well, almost no one. Ryall and his angry sources can blame them, and so he continued in 2020 with a piece that examined how silly the Japanese were to dislike an advertisement from Nike that accused Japan—you won’t believe it—of racism and bullying.

“The video depicts the experiences of three teenagers, including a biracial Japanese girl, who experience discrimination and bullying,” Ryall wrote:

While some people welcomed the message, others slammed the US company for passing judgment on Japan’s social and cultural values

A Nike video advertisement about bullying and racism has triggered a fierce backlash in Japan, including some calls to boycott the sporting goods giant.

Being a GoodWhite journalist, Ryall found a black victim of Japanese racism and a black American college student only too happy to instruct the Japanese on right thinking:

One scene shows a girl, who has a Black father and Japanese mother, having her hair pulled by students. Also featured are an ethnically Korean girl, and a Japanese teenager who is the target of bullies while also receiving academic pressure from her parents.

Tiffany Rachel, 22, an African-American university student who has lived most of her life in Japan, said the Nike video could play a role in encouraging young people to begin talking about race…

“But in Japan, they do not want celebrities to do that … So Japan is not having that debate,” she said.

Is Rachel on Ryall's speed dial? How did he find her? Why must the Japanese listen to a random black American's complaints about her hard life in Japan? If Japan is so bad, why did she stay most of her life?

She isn’t even a hafuu, half-Japanese, half alien, like the girl in the advertisement. She’s “African-American.” She should be content to live in a safe and orderly Japan. She might otherwise have been living in Chicago or Baltimore, and become a victim of her fellow blacks due to the Floyd Effect.

However, there is hope for Japan, and as VDARE.com’s John Derbyshire once said, it lies in the comment threads. Ryall reported:

While there were many comments supportive of the campaign, some people in Japan were critical of a foreign company passing judgment on the country’s social values.

“I’m tired of companies and celebrities thinking they have some kind of moral platform,” one person wrote on the SoraNews 24 website. “Nike, like many clothing companies, uses forced labor in China and other parts of the world. Maybe they should do a commercial about that.”

A user on Twitter said foreigners who did not like Japanese culture and values “should not live in Japan. … I would like you to go elsewhere.”

But Ryall didn’t take that advice. Instead, he continues his long-running campaign to make Japan less Japanese.

His latest attack on the country that graciously permits him to live and work there involves its supposed mistreatment of Koreans: Why Is Anti-Korean Racism In Japan On The Rise Again?, SCMP, January 23, 2022.

“An upswing in hate crimes has seen homes burned and death threats made towards ethnic Korean communities—whether allied to North or South—in Japan,” was the subhead on this broadside:

Nearly 20 years ago, after Pyongyang admitted that its agents had abducted Japanese nationals, someone smeared on the walls of Chung Hyon-suk’s Tokyo home: “North Koreans live here. Be careful.”

The sense of danger she felt that day has returned.

“Japan’s relationship with the two Koreas has always been complicated due to Tokyo’s colonial rule of the peninsula, but things changed for North Korean residents of Japan after they confirmed the abductions,” she said.

“Politicians and the Japanese media kept up a constant attack on everything about Korea and for the next decade it was difficult to live here,” said Chung, who was born in Japan and has lived in the country all her life. Her grandparents were originally from North Korea and she is a member of Chongryun, the association of North Korean residents of Japan.

“Our house was damaged and I was very worried about my two sons, who were at primary school at the time, so I went to the police,” she said.

Nor does Ryall care that Koreans maintain a separate, subversive identity in Japan:

At those special schools, Koreans learn not in Japanese and about Japan, but in Korean and about Korea. I’ve written about them at my own website [The Japan That Can Say Abe Shinzō, October 5, 2019].

Ryall’s claim of Japanese “racism” against Koreans is somewhat curious. The two peoples are the same East Asian phenotype. Japan’s first settlers came from the Korean peninsula. While modern Koreans differ from the Japanese because of their deeper epicanthic fold, the difference is often imperceptible. Yet Ryall deploys all the buzzwords of the modern anti-racist. Maybe Ryall should visit South Korea to see racism in action [In Korea, double standards on racism, by Da-Sol Goh, Asia Times, March 24, 2020]. (Not that the two Koreas are any more obligated to import blacks or Muslims than Japan is.)

Ryall is not just against “racism.” He’s pro-black, pro-Korean, and pro-immigration. But why? Why such a focus on “racism” and attacking Japan?

Answer: His paymaster is in Hangzhou, China. SCMP is owned by the Alibaba Group, a Chinese tech company. The newspaper is the “leading edge of China’s efforts to project soft power abroad,” as the New York Times described it:

Every day, The Post churns out dozens of articles about China, many of which seek to present a more positive view of the country. As it does, critics say it is moving away from independent journalism and pioneering a new form of propaganda.

So Ryall is a Chinese propagandist. That doesn’t mean he’d write anything differently if he were a real journalist, of course. He undoubtedly believes what he’s writing.

If I were Japanese, I’d deport him and the rest of the foreigners who malign my country because its people want to preserve their race and way of life.

Recall the slogan of the Japan First movement’s 19th-century predecessors, who mobilized after the country opened its doors to Western trade: