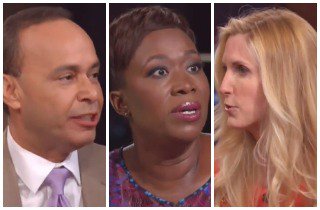 Donald Trump has single-handedly upset the applecart of official blather about immigration, the style of diction that Steve Sailer has called, quote, "comically mercenary fraud covered up by pious cant." The apples are rolling all over the street now, and the faithful minions of Chambers of Commerce racketeers, foreign governments, globalist bankers, and ethnic lobbyists are scurrying and squealing all over trying to get them back in the cart.

Speaking as a political observer, this is the most fun I've had for ages. More popcorn! 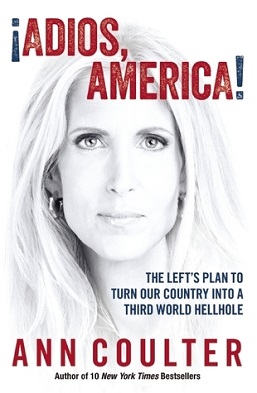 But if patriotic immigration reform has a hero in Donald Trump, it also has a heroine. That would of course be Ann Coulter.

That's a simply wonderful showing for a book that lays out in detail, with full supporting references, all the stupidity and dishonesty of our immigration system, displaying it all to public view.

To take one small example at random, from a hundred I could have taken: You know how politicians come up on your TV screen, look you straight in the eye, and tell you that they support Amnesty for illegal aliens but only if the alien pays a fine, pays back taxes, and learns English?

Well, that's all bogus. As soon as Congress passes Amnesty, all those conditions will be dropped.

How do we know this? Because we already had one Amnesty: IRCA, the Immigration Reform and Control Act of 1986. IRCA had those fees, those fines, those requirements to pay back taxes, and, yes, a requirement that the alien — and here I quote from the actual text of the IRCA law, Title II, Section (b), subsection (1), item (D), paragraph (i):

What happened to those requirements? Let Ann tell us. From Adiós, America!, page 44:

I urge you to read Ann's book if you haven't already done so. For those of us who've been toiling for years in these vineyards, it's wonderful to see the topic getting front page exposure at last.

I can claim to be a fifteen-year veteran of patriotic immigration reform. That's how long ago I published my first article at VDARE.com. VDARE.com Editor Peter Brimelow was pruning the vines eight years before that with his ground-breaking cover article Time to Rethink Immigration? in the issue of National Review dated June 22nd 1992.

We flatter ourselves that Ann got some of her facts from reading us, along with other sites exposing the current sham, sites like Center for Immigration Studies and NumbersUSA.

Immigration has been a niche interest, though. Those of us trying to bring it to the political front burner have been working…how shall I put it?...ah…in the shadows, as respectable opinion has for decades deemed any criticism of immigration policy to be motivated by malice and cruelty.

Now the ice is breaking at last. A lot of the credit for that goes to Ann Coulter. Thank you, Ma'am.

Let's take a glance at how the new openness on immigration is affecting the course of the Cold Civil War — that everlasting conflict between wise, moral, progressive goodwhites on one side, and dumb, evil, reactionary, gap-toothed redneck hillbilly badwhites on the other side, with minorities conscripted in to feed the horses and dig field latrines when necessary.

For illustrative purposes here we can take the June 19th airing of Real Time with Bill Maher, a political talk show hosted by, of course, Bill Maher.

Maher is one of the smirkers, along with Jon Stewart and Stephen Colbert. He's a champion of the goodwhites. His smirk, in fact his entire demeanor, says to badwhites:

"I see through your lies and pretense. You claim to be religious and patriotic, but I'm too smart for you. Your religion and your patriotism are just cover for the real interests of your wealthy puppet-masters. If we goodwhites don't keep hard at work exposing you and keeping you off balance, you'll be reinstating slavery, massacring Indians, persecuting Jews, and invading Poland first chance you get."

Well, on June 19th Ann's book was just out and Maher had her on the show to talk about it. To feed the horses he'd shipped in some colored folk: A fat, angry-looking black woman, and Congressman Luis Gutiérrez, a Latino—or as he says, La-THEEEN-o—supremacist, who is on record as saying, quote: "I have only one loyalty, and that's to the immigrant community."

Maher went for the race angle at the first opportunity. The fondest conceit of the goodwhites is that they are free of all racial prejudice, while badwhites are seething with animosity, yearning to bring back lynching and Jim Crow.

Ann:  We didn't used to take people just because they lived within walking distance. We used to have an immigration policy where we would choose the best in the world, and that was changed …

Bill:  Well, we would choose the whitest in the world. 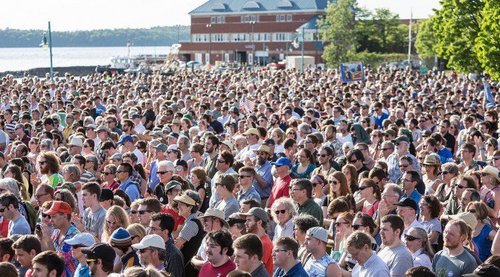 Further for the record, Bill Maher lives in Beverly Hills, California, whose population is 78.5 percent white and only 2.5 percent black. Perhaps President Obama's Fair Housing Initiative will even things out there.

Congressman Gutiérrez pointed out that a million Latinos—I beg your pardon, La-THEEEN-os—come of age in the U.S.A. every year; to which Ann responded, so do four million whites.

That's what we badwhites call a hatefact, and you could see that Ann's brow was dark with hatred as she uttered it. It is, none the less, something the Republican National Committee might want to ponder as they scrape Sheldon Adelson's shoe polish off their tongues.

The black lady then got to speak.

Black Lady: I think one of the things we have to do in this country is to stop lying. [Applause.] We were earlier talking and touched on the issue of slavery …

I make that 7.12 seconds of talk, including a pause for audience applause, before the black lady mentioned slavery. That shows extraordinary restraint on her part, for which I think we should congratulate her.

She went on to argue that today's mass Third World immigration is a modern equivalent of slavery, run by selfish corporate elites seeking cheap labor.

Since Ann makes a similar argument in her book, many times over, the black lady was revealing that she hadn't actually read the book she'd been invited on prime-time TV to discuss; or, if she had read it, she had utterly failed to understand what she read.

The thought crossing Bill Maher's mind at this point had to be: "Sheesh, you just can't get good help nowadays."

Let's hope the black lady is at this point back to digging field latrines, which I'm sure she does very well.

Congressman Gutiérrez is no doubt back pursuing his one and only loyalty, whipping up La Raza against the hated gringos. Hey, Congressman: To judge from that studio audience, not even you hate white people as much as goodwhite people hate themselves and their ancestors.

You I call it a clear victory for us badwhites; which is pretty sensational, as there was only one of us there and a whole studio packed with goodwhites.

Long odds; but not too long for Ann, bless her.