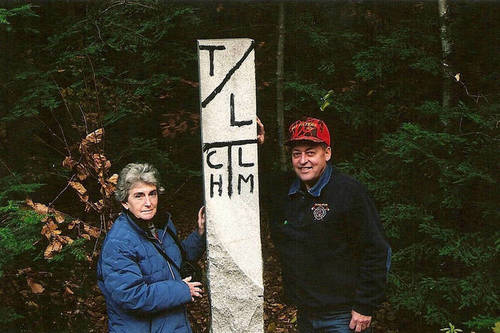 Contra the “proposition nation” rhetoric, the U.S.A. is not an “idea”, but a real flesh-and-blood nation, with its own culture, history and traditions.

I ran across an article (on the Wall Street Journal, ironically) describing the interesting “perambulation” tradition still practiced in New Hampshire.

ON THE ALBANY-MADISON TOWN LINE, N.H.— Paul King hiked through deep woods and scrambled over boulder-strewn hills, hunting for his next clue. “It’s still here,” he exclaimed at the sight of a bent red pine tree, one of eight landmarks demarcating the border between two northern New Hampshire towns: Albany, population 735, and Madison, home to 2,500 people and a famously large rock.

So what’s going on here?

The towns hired Mr. King, a surveyor, to spend a sunny day in early May fulfilling a 17th-century duty that has survived into the era of Google Maps and the Global Positioning System. New Hampshire law requires officials to physically walk their towns’ borders every seven years and spruce up boundary markers, often granite tablets or wooden stakes anchored by rock piles.

Perambulation, a kind of septennial scavenger hunt, is one of New Hampshire’s oldest and oddest traditions. Critics call it an archaic hassle and many towns simply ignore the duty. But its passionate defenders say the practice is essential to ensure buildings and people are exactly where they should be for the purposes of property taxes, school-district assignments and emergency services.

One advantage is to actually have a civic representative physically walking the town’s boundaries.

“GPS is a wonderful tool, but it’s a tool, like the compass and the surveyor’s chain,” State Archivist Brian Burford said. It can give approximate locations, but “if you go out there and find a stone [marker] standing there, you know you’ve found the spot.”

There’s been opposition, but the Granite State has been able to preserve this tradition as law.

The custom didn’t originate in New England, but in the Mother Country.

Perambulation traces its roots to early England, where some places still observe the custom of “beating the bounds.” It crossed the Atlantic Ocean to New England, where perambulation of property lines was both legal procedure and ritual.

It [perambulation] was “one of the ways of conquering the land and making it your own, and establishing English law and customs and property rights, and even the concept of owning land and being the master of land,” said Allegra di Bonaventura, assistant dean at Yale University’s Graduate School of Arts and Sciences, who studied early New England perambulations.

Mr. Burford traced New Hampshire’s requirement for periodic perambulations to 1651, when it was still part of Massachusetts Bay Colony. The law has been in roughly its current form since 1791, declaring that town lines “shall be perambulated, and the marks and bounds renewed” by selectmen or their designees every seven years “forever.”

And “perambulation” still seems to be rather common in New Hampshire.

No one is punished for noncompliance. But many communities appear to take it seriously. More than two-thirds of local officials surveyed in 2010 by the New Hampshire Municipal Association said at least some of their boundary lines had been walked within the past seven years.

I propose we adopt perambulation as a national tradition. We could require all senators and congressmen, and congresswomen to physically walk the entire U.S.-Mexican border every two years. Otherwise, they wouldn’t be qualified to vote on any immigration legislation whatsoever.

Fred Mullen, a retired master plumber, has been walking Dunbarton’s borders since 1997 and holds the title “perambulator of town lines.” It’s fun, he said, and dovetails with his geocaching hobby. It also comes with the sense of carrying on a tradition stretching back centuries. “Somebody stood on this very spot doing this exact same thing 200 years ago,” Mr. Mullen said.

Perambulation, with its long tradition, has of course been abused.

That history isn’t entirely wholesome. On Dec. 5, 1872, selectmen from the southern New Hampshire town of Mason apparently tried to annex part of neighboring Greenville by tricking the other town’s selectmen into walking the wrong border. The state Supreme Court later threw out the fraudulent report. “If this record is permitted to stand without objection, in the lapse of not many years the witnesses will be dead who knew about its falsification, and the record will stand as evidence which will always embarrass those who are seeking for the truth,” Chief Justice Edmund Lambert Cushing wrote in 1876.

There’s a relevant Biblical quotation , Proverbs 22:28, which reads “ Remove not the ancient landmark, which thy fathers have set.”

And, on a national level, in St. Paul’s Discourse in Athens, in which the apostle declared that God “hath made of one blood all nations of men for to dwell on all the face of the earth, and hath determined the times before appointed, and the bounds of their habitation”. Open borders Christians like to read that first part and ignore the last part.

Secure property lines, county and state lines, and international borders make peace and prosperity more, not less, likely. Look at our disastrous southern border for evidence of that.

If there are disputes in New Hampshire, officials from both municipalities could walk the division line together.

The modern age has perambulation controversies, too. John Fournier’s land straddles the Middleton-Wakefield line. He says his house is in Middleton, but Wakefield claims it. He filed a lawsuit this year against both towns, saying a key boundary marker has gone missing and a 2009 perambulation that placed his home in Wakefield was botched. Wakefield and Middleton denied in court filings that the 2009 perambulation changed the historical boundary.

Mr. Fournier wants a new perambulation to clarify the border so he can vote in Middleton, among other things. “This is the Live Free or Die state. I’m not being allowed to live free,” he said.

Landmarks can change through the years. A prominent tree, for example. It may continue to grow, it may die, it may be bulldozed, or other trees may grow near it. A river or creek might change course. Buildings can decay or be destroyed. Roads may be abandoned and others constructed. A landmark may be covered with vegetation. Many things can change landmarks, which is another reason this is a good law, requiring representatives of a municipality to walk the boundaries from time to time.

In 2007, Mr. King perambulated the Albany-Madison line over the course of several weeks. He marked blazes on trees along the border, replaced fallen or missing markers and installed a granite post next to the red pine tree, which appeared in an 1853 perambulation of the line but now seems ready to fall over.

All that made things easier when he again walked the line this month over the course of eight hours, navigating with the aid of a hand compass and a GPS unit. He did opt to detour around Whitton Pond, rather than follow the line straight across the lake.

Other perambulators have interpreted their duty somewhat more strictly. Mr. Burford, the state archivist, said he was walking a town line in the early 1970s and found it passed through a swamp. Undeterred, he walked in, neck-deep.

“If I had been smart,” he later acknowledged, “I would have walked around.” Some Devoted New Englanders Went for a Stroll in 1651 and Haven’t Stopped Since, by Ben Leubsdorf, Wall Street Journal, May 23, 2015