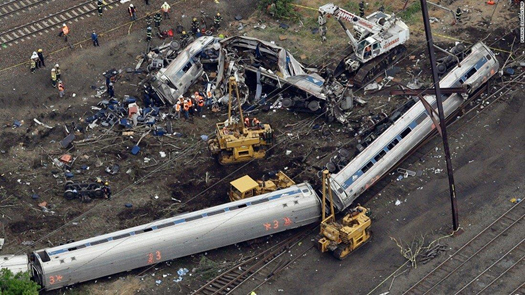 The investigation of the deadly derailment of Amtrak Train 188 in Philadelphia is continuing and Amtrak has announced it will now be placing cameras to monitor the actions of its engineers [Video Cameras Coming to Amtrak Train Cabs After Philly Crash, by Trevor Mogg, Digital Trends, May 27, 2015]. Unfortunately, they might have their cameras pointed in the wrong direction: vandalism by rock-throwing thugs may be the real cause of the crash. But if so, on past form, our rulers may never tell us.

The May 12, 2015 crash killed eight passengers and injured 200, including several Amtrak crewmembers. Investigators have ruled out mechanical malfunction or rail problems. The locomotive engineer’s drug and alcohol tests have turned out negative. Preliminary interviews seem to rule out fatigue or illness. Investigators are examining the engineer’s cell phone records, but the engineer’s attorney has stated that his cell phone was not in use during the operation of the train. The FBI has concluded that a bullet did not cause front window damage in the engineer’s compartment—but investigators have not ruled out a “flying object” striking the train.

That “flying object” could well have been hurled by vandals, smashing the window and possibly stunning the engineer, accounting for his loss of memory. Trains along the Philadelphia stretch of the northeast rail corridor, the country’s busiest, are routinely “rocked” by stone-hurling hoodlums—and on the day of the Amtrak derailment, projectiles struck other trains traveling in the same area:

A spate of projectiles apparently hit trains in North Philadelphia the night of the crash.

A Trenton-bound Septa regional commuter train was struck around 9:12 p.m. near the North Philadelphia station, breaking the windshield and disabling the train.

Alfred Price, a documentary filmmaker, was in the train’s front car when he heard a loud boom and felt the train come to a stop. No one was injured, but when passengers knocked on the door of the engineer’s compartment, the engineer emerged dazed, Mr. Price said in a telephone interview on Friday. ‘The window was smashed. It was shattered,’ he said. ‘He didn’t really know what was going on. He was in shock.’

As the Septa passengers waited for a replacement train, they watched Train 188 pass by….

Shortly before the crash — around the same time the Septa train was hit by an object — a southbound Amtrak Acela train was also hit by a projectile, shattering a side passenger window.

Passengers told Philadelphia Magazine that the impact had happened north of the North Philadelphia station, the same area where, investigators say, Amtrak Train 188 might have been hit.

As the New York Times’ report notes, the “would-be rock throwers” had easy access to the area and an “endless supply of ammunition” (piles of rocks) not far from the Amtrak derailment. An NYT reporter described the area near the derailment as “dark blocks of crumbling rowhouses” and “vacant factories.”

‘There’s fences, but a lot of times they are falling down,’ said a 16-year-old with long hair and a thin mustache who gave only his first name, Isaac. ‘A lot of people go down, creepy people, bums — they throw rocks, they throw bottles, but usually it’s no big deal.’

Nevertheless, the possibility that a flying object hit an Amtrak train before it lurched off the rails Tuesday in Philadelphia has unnerved riders and drawn increased public scrutiny to the safety along that stretch of track. Federal and railway officials say being struck by rocks, bricks and even bullets is a longstanding problem for trains in the country’s rail systems.”

Railroad tracks are private property where trespassers are supposed to be controlled by transit police patrols.

“But residents of North Philadelphia say old fencing in their deteriorating neighborhoods provides easy access to the rails, where the police rarely venture. Bottles, bricks, tires, old bicycles, cinder blocks and other urban detritus pile up by the tracks, along with people who have nowhere else to go.

“Bums be a lot back there, stumbling around all high,” said Carmen Marie, a lifelong resident, “crackheads, folks shooting up, doing whatever they do, throwing things.”

The Washington Post reported the FBI is researching the possibility of a “projectile” striking the train, but it refused to acknowledge that people could have thrown the projectile, merely saying, there was “the possibility that outside factors could figure into the incident” [FBI probes report that projectile hit Amtrak train that derailed, by Lori Aratani, Luz Lazo, and Michael Laris, May 15, 2015. Emphasis added.]

Vandals are apparently “outside factors.” 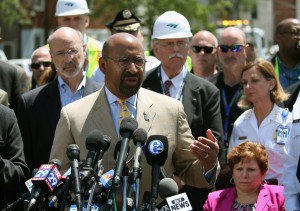 “Rocking” has caused casualties before. In January 2013, a rock crashed through the front window of a moving commuter train and injured the SEPTA engineer near 33rd and Girard Avenue in Philadelphia. Yet the New York Times reported that Philadelphia’s Mayor Michael Nutter, who is black, “dismissed the significance of other trains being hit by objects, saying… ‘Different place, different train, nothing to do with this tragedy here.’”

This reaction by Mayor Nutter is all too typical: yet another African American public official excusing away the city’s thugs. Following in the footsteps of Baltimore’s Mayor, former Attorney General Eric Holder, and President Obama, Nutter avoids the reality that large, predominantly black sections of Philadelphia, Baltimore, Chicago, New York, Cleveland, and other urban areas are just chronically violent.

Our elites are no longer “Defining Deviancy Down,” as Daniel Patrick Moynihan astutely noted, but are Excusing Deviancy Away in describing violent acts as “outside factors.” And now this kind of behavior is even spilling out of the ghettos and even sabotaging our mass transit system.

So the “Broken Windows” theory of criminal behavior (in this case, one “Broken Window”) may offer a more credible explanation for what caused this deadly event than the lack of Amtrak funding or the personal peculiarities of engineer Brandon Bostian, reportedly a gay activist.

But remember that, in 2005, when an SUV deliberately parked on the tracks caused 10 deaths in a train derailment in Glendale CA, the formidable Michelle Malkin was completely stonewalled by local authorities when she asked if the man responsible, Juan Manuel Alvarez, was an illegal alien. Indeed, Alvarez’ immigration status seems never to have been reported in the Main Stream Media, although it emerged at his trial that he lived in Mexico as a child and speaks Spanish to his family [Attorneys plead for Alvarez| Defense team tells jurors about phone message he left after deadly 2005 Metrolink crash, By Jeremy Oberstein, Glendale News-Press, July 11, 2008].

If federal officials are suddenly unable definitively to determine the cause of the fatal Amtrak crash, we can guess black “youths” were responsible.

Which may be why you won’t hear much more from the MSM about why eight people died that May night.